This is suddenly real. I have been meaning to start this project for a while now. I actually started taking notes at shows and wanted to start blogging about them in mid October of 2011, but I was so busy seeing shows (17 from that point on, in fact), I didn’t make time for the writing part. I figure starting fresh in 2012 and doing a show at a time is more doable. 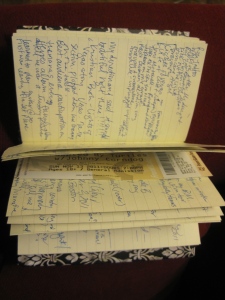 I saw 52 concerts in 2011. At some point in the year, I realized I was on pace to hit one show a week and went for it. I saw 35 concerts in 2010. My goal for 2012 is to see as many shows as feels right. That might sound strange, but seeing a show a week (which actually ended up being two or three or even four shows in one week and then having a week or so off) ended up feeling a little like work at the end. But I’m a goal-oriented person who does not know when to say when. I have been asked a number of times why I don’t blog about the shows I’ve seen. I’ve wondered if blogging is a little self-indulgent. Why would anyone possibly want to read what I think about anything? But one of the things I do realize as I get older is that I have a terrible memory, and frankly, when you see as many shows as I do, it’s easy to mix them up or forget about them entirely. So, keeping the memories of these shows at my fingertips will motivate me to write about my busy concert-going life. If anyone out there is introduced to a new band or checks out a new venue or just becomes more motivated to go out and do something they love because of something they read here—I’ll be thrilled.

A lot of people think seeing 52 shows or even 35 shows is extreme. At this moment, I can’t seem to find the right words to describe just how important music is in my life. It’s a religion. There is a song that describes every possible feeling. I can hear a song on the radio and remember the first time I heard it or who played it for me. There are songs that make me feel exactly the same way every single time I hear them. There is power in music. Hearing the opening minutes of “Where the Streets Have No Name” being played live by U2 at a stadium is a religious experience—it makes me feel like there is nothing but good and hope in the world. The feeling I get that I am connected to everyone there taking part in the same experience is nearly inexplicable. It’s the closest to enlightenment—tapping into the energy in all things in the universe—that I can imagine getting.

So, if you’re still reading, you probably like music. Let me introduce you to some musicians I love. If you are ever interested in joining me for a show, please check out my concert calendar and let me know. I see a lot of music alone, because, let’s face it, who else is going to see so much live music with me!? Thank you to all of you who have been along for the ride. Being around music is when I feel most like myself, but having great friends means even more to me. Having the two together is precious to me.