The Western Den with Oshima Brothers

Every so often, I’ll make my way to a show knowing very little about both bands. This was one of those nights, and I am *so, so glad* I was in the room for this Oshima Brothers and The Western Den show. Color me impressed.

Dan made me dinner and then I made my way over to Portland House of Music and Events right before 8pm when the Oshima Brothers were scheduled to take the stage. I ran into two of my seniors from school who are both going with me to Costa Rica in April and we caught up about our February vacation plans before the show began. I was surprised by how many little kids were at the show with their families–most gathered together and sitting on the floor in a pile. The Oshima Brothers are from the Belfast area, and I suspect most of the folks in the room were their friends and family.

I was impressed with Sean and Jamie right away. They have a maturity and ease on stage that might come from years of practicing with your brother at home. Their songwriting, musicianship, and confidence on stage was compelling. Jamie was busy making most of the sound that night with pedals and foot percussion and a variety of instruments, too. Their harmonies are lush and Sean’s falsetto is lovely. 98.9 WCLZ is currently playing their newest single “Ellie.” I also enjoyed their excellent cover of The Bee Gees’ “How Deep is Your Love.” Sean was super enthusiastic about the Diriga Quartet who accompanied the brothers for a few songs and brought their songs to even greater life. 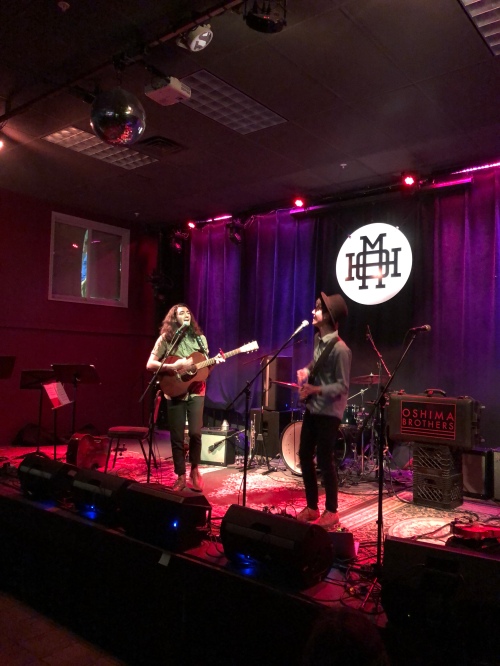 Sean and Jamie Oshima are the Oshima Brothers

The Oshima Brothers joined by the Diriga Quartet

This tired kiddo slept through most of the first set

The Western Den came together at Berklee College of Music in Boston, and their musicianship is dazzling. Co-led by Deni Hlavinka from Virginia on piano and Chris West from Bermuda on guitar–the two met online on a Berklee accepted students forum seven years ago–The Western Den also included three more musicians on drums, violin, and trumpet.

The Western Den with the Diriga Quartet

Deni talks the most on stage, and I appreciate musicians who give the audience context for the songs we hear live. She introduced “Company” as a song about “the temporary moment you’re with family and can appreciate the sacredness of that” featuring the fabulous Diriga Quartet, who Deni asked to join their band permanently. She introduced “xx” (named for the female chromosome) by telling us that she is named after her grandmother and feels like “there’s a power in belonging to where you’ve come from.”

The Western Den’s new album, A Light Left On, is stunning. It’s beautiful from start to finish–honest, vulnerable, layered, and just supremely listable. I’m only a few listens through and it’s mesmerizing and reveals itself a little more each time. It’s also absolutely impossible for me to pick a favorite song or two as their ethereal, airy, orchestrated folk/pop songs are 100% up my alley. Their Facebook page says this about the album–

“’A Light Left On’ weaves through struggles of love, purpose, self-actualization, and the ephemeral nature of all things. and through all of this, to hold on with all of your might to the glint of unwavering hope for the certainty of belonging and the unapologetic pursuit of what is waiting for you.

you are important. you are a vibrant and powerful being. you are the light left on. this is for you.”

Watch The Western Den’s Daytrotter session recorded earlier this month in Iowa and get to know this truly impressive band.

I saw Lula Wiles open for Mipso in 2016 and for Darlingside in 2017 and I was eager to see them headline a show. Dan made me a quick pre-show dinner after work and I made my way over to One Longfellow Square for Lula Wiles’ sold out show. OLS was packed when I arrived, but I managed to find a single seat in the corner near the stage. Lula Wiles–Isa Burke, Eleanor Buckland and Mali Obomsawin–are all Mainers, so I think the room was packed with friends and family. Their recent exposure on NPR couldn’t have hurt, either. I’m happy for them that the word about Lula Wiles is getting out!

Mia Bertelli took the stage with Benjamin Foss, and sisters Edith and Elsie Gawler. Mia told us it was Ben’s debut on the upright bass. They all live in the Belfast area and gig regularly in that neck of the woods. Their harmonies are just lovely. Mia joked that they’d played out the night of the Super Bowl and might make their band name Mia Bertelli and the Harmony Touchdowns. I was fascinated to learn that everyone on stage all night (except Lula Wiles drummer, Sean Trischka) met at Maine Fiddle Camp. If Maine Fiddle Camp needs to drum up business, they should have just recorded this show as inspiration for the talent they help foster. One of the Gawler sisters acknowledged that night’s highlighted local organization, 317 Main, where their mom, Ellen, happens to teach. The quartet performed many songs about water, including “Dip and Sway.” To say that this opening band warmed up the audience is an understatement.

I’ve been seeing fewer and fewer shows, and it’s because folks in audiences have grown increasingly rude–talking incessantly, recording the show with their phones above their heads, and even pushing (a lot). I’ve started to avoid shows at bigger venues in town, and I realized 45 minutes into this intimate show at One Longfellow Square–one of Portland’s only true listening rooms–I was just so grateful to be in the room and sharing a concert experience with an audience that really wanted to be right there, too.

Everyone was pumped for Lula Wiles, and they delivered. It’s such a pleasure to hear songs with depth that are steeped in social commentary from a trio of young women who are impressive musicians with beautiful voices. Isa called this show their home state record release show, and they played a lot of songs from their second album, What Will We Do. Check out NPR First Listen’s review of their sophomore album. Lula Wiles met at Maine Fiddle Camp, but they also refined their sound together at Berklee College of Music. They have both an ease and a sophistication from both of those worlds, too.

A trapping of growing success, Isa told us that a girl who was mean to her all through school wanted to hang out with her during her last visit home. She wrote a fabulous new song about it, which included the refrain “We’re not making plans, Maryann.” Lula Wiles covered “The Pain of Loving You” by Dolly Parton and Porter Wagoner on their record and played it for us. Mali teased Isa before they started singing, “this is another song about being alone, right Isa?” Isa responded, “happy love songs might happen at some point, but tonight is not that night.” It might have been Eleanor who interjected that “it’s not really a Lula Wiles show unless you get to learn a lot about our personal lives.” I really appreciate seeing a band in person that wears their hearts on their sleeves and interacts with each other and with the audience and creates a true concert experience–even if they’re gently picking on each other.

Mali lamented the “exploitation and erasure of Native people” asked us to reflect on “what it is like to be Native in a country that was not made for Native people” during “Good Old American Values.” As the trio tuned their instruments to prepare, Mali joked “we have to be perfectly in tune to talk about colonialism, so bear with us.” Mali also took the lead on “Morphine,” which she dedicated to anyone who has struggled with addiction.

Isa picked up a banjo (was that the third or fourth instrument she played that night?) and took the lead on “Shaking as It Turns.” Lula Wiles wrapped up their set on a high note and the audience jumped to a standing ovation. The trio returned to the stage and covered Lucius’ “Go Home” a cappella around a single microphone. I was glad to hear a song without any instruments to sit back and enjoy Lula Wiles’ easy, airy harmonies without any distractions.

What a show! Lula Wiles is the real deal, y’all!