If you’re lucky, every so often, a musician speaks right to your soul. I think Noah Gundersen does this for a lot of people, and I feel fortunate to count myself among them.

I saw Noah Gundersen open for City & Colour back in June of 2017, and he stole the show. I’ve been a devoted City & Colour fan for years, but Noah was just way more captivating that night. He’s a good example of why I try not to miss opening acts. I was really excited when he announced a headlining show at Port City Music Hall for February of this year. Our friend Max Garcia Conover was going to open, which in my mind is a very compatible match, but we got a major snowstorm and the show was postponed–for more than six months. Fortunately, Noah Gundersen is worth the wait.

I finally introduced two of my Portland concert friends, Colin and Sean, to each other a couple of weeks ago at an awesome Joseph show, and this was (already) our next show as a trio. I arrived while Harrison Whitford opened the show, and Colin and Sean were already standing along the stage when I showed up. Harrison’s music is very mellow, and many people were sitting on the floor during his set, which was kind of dear. His electric guitar reminded me a bit of Jeff Buckley. He sang a handful of songs for us and I was impressed by how attentive the small crowd was. 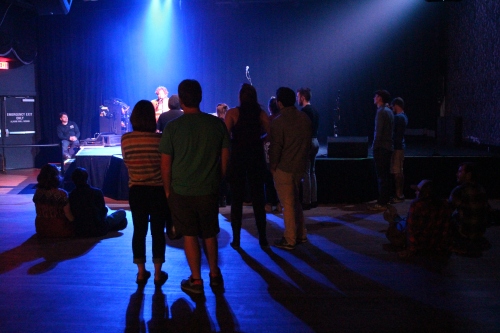 After Harrison’s set, my friends Bartlett and Brady came up front to say hi. Bartlett reminded me (I’d forgotten) that Max was originally supposed to open the show, so he’d checked out Noah to prep for that show and fell in love. I was glad to take in a show with some surprise bonus friends two weeks in a row at Port City.

Noah took the stage with his sister Abby on violin, and even though I had a photo pass, I only took photos during the first song. The crowd was so captivated that I could hear my shutter over any other noise in the room, and it felt like an unnecessary distraction. In fact, the crowd was so attentive, I can remember the three times I heard anything other than Noah all night–a drink being shaken at the bar, when a guy sneezed and Noah stopped to say “Bless You” to him, and towards the end of the night when a heavy footed woman made her way in boots across the room. How often at a show do you get to hear every single word with no distractions? It felt special.

I just really want you to know Noah’s music. His songs have depth, texture, and a kick in the feels if that’s up your alley. A handful of his songs that I particularly loved live were “Isaiah,” “Fear & Loathing,” “First Defeat,” “Family,” and “The Sound.” I was really sad to miss the Newport Folk Festival this summer (I had to sell my ticket and stay home to renovate while my dad was in town to help), because Noah performed there with Glorietta. I enjoyed “Lincoln Creek” from that project a whole lot, too. After a heavy, powerful, emotional set, Noah treated us to a two more beautifully depressing songs about death as an encore–“Send The Rain” and “Dying Now.” It was a pretty stunning night of music. I saw Brady and Bartlett over the weekend and we were excited to have the chance to relive the experience together. If Noah Gundersen is playing in your town, I couldn’t recommend seeing him live more highly. He is such a talent. I was really grateful to have been in that enthralled crowd listening to him last week. It was a true pleasure.