This night was exactly what I needed. It was such a pleasure to see a band for the first time whose music I love in a room full of people who were actually listening. That should be the norm for a crowd at a show, but sadly, it typically isn’t. To my fellow show-goers–thank you for this night. I was so happy to share this night with you.

I made it to Port City Music Hall just after show opener Kelsey Kopecky took the stage. I recognized the name and Kelsey mentioned she’d played in Portland years ago opening for Michael Franti with her former band, the Kopecky Family Band, which I’d heard of. Kelsey has a pretty voice, but her banter was sometimes awkward and her songs all hit the same note to me. She made a lot of jokes about “her band,” which she called “Alexa and Siri.” I liked her cover of “Kids” by MGMT. She seems like someone learning how to be a solo act and even solicited ideas for a new band name and told us some of her mom’s suggestions.

I had been wanting to see Oregon’s sister trio Joseph for years. I missed them at Newport Folk Festival in 2017 (I had a ticket, but didn’t get to go), but my friend Marian saw them up close there in a tiny show and sent me a video so I knew I’d really missed out. I’d seen a few stressful, crowded shows over the summer, so it was particularly lovely to get to stand right up front along the stage just feet away from the band. It was so nice to get to see and hear at a show for a change.

Joseph–sisters Natalie Closner Schepman, Allison Closner, and Meegan Closner–are something special. Their harmonies are beautiful, their songs full of heart and honesty, and their stage presence is captivating. I was so glad a handful of friends also came out to see them, because this is a band people really should know. Here’s their NPR Tiny Desk concert, an interview they did that gives good background, and a cover song they performed with Zach Williams from The Lone Bellow (a top favorite band of mine) at their 2017 stop at Newport Folk Festival.

I appreciated that Natalie, Allison, and Meegan shared what some of their songs were about with us. I love it when artists do that at a show. I was particularly glad to hear “White Flag” and “I Don’t Mind” live. Natalie wrote a touching song about her best friend’s baby and the overwhelming feeling of love you have for a newborn and the idea, also, that no matter who who we become, we all started out as innocent as a tiny baby. Natalie gave a shout out to her friend Amber who she used to work with at Starbucks in Portland, Oregon. Amber brought her awesome service dog, Winston, who enjoyed the show with his headphones on right up front. He was the cutest! 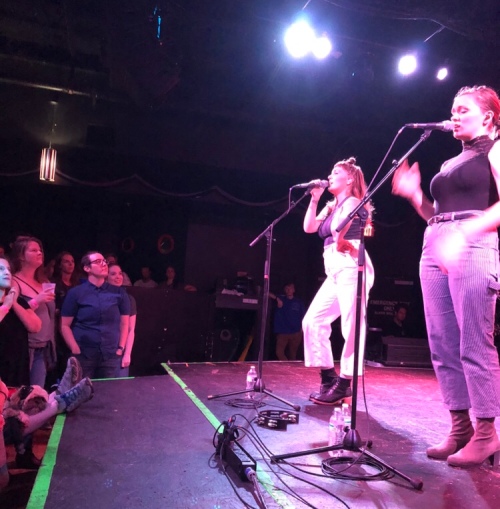 Do you see Winston?

Kelsey joined Joseph on stage for a beautiful, timely cover of “Everybody Wants To Rule The World,” too. This was such a lovely night. I noticed well into Joseph’s set that I couldn’t hear anything else but them. It’s so rare at a show these days, but we were into them. I sure hope they’ll be back.