This was a pretty spectacular Saturday. My friend Kay is fostering kittens (!), and Dan and I got to spend some time snuggling with them in the morning. I made Christmas cookies and watched A Christmas Prince (again) with my girlfriends and adorable almost one-year-old baby Norah, and had a delicious homemade dinner at Dan’s before the show. It was a really good day already, and the icing on the cake was getting to see Darlingside for their once-a-year Maine show.

I made my way over to Port City Music Hall just before 8. I ran into my buddy Aimsel Ponti at the door and met up with Colin and Sean up front along the stage for Darlingside and Henry Jamison. I saw Darlingside for the first time at One Longfellow Square back in 2012 and they impressed me with their rich harmonies and warm audience interaction. This was my eighth Darlingside show, and they are always a pleasure to see live.

I just missed seeing Henry Jamison live back in 2012 at The Oak + The Ax in Biddeford, Maine. I arrived late for a Joe Fletcher and brown bird co-headlining show, just as his Bowdoin College-era band, The Milkman’s Union, was wrapping up their set. I recognized Henry when he took the stage from his days living in Portland working at One Longfellow Square, and it was cool to see that he has become a known musician with a devoted following in the last few years.

Henry Jamison is a Burlington, Vermont native with a massive vocabulary and skillful, layered songs. He chatted warmly with the attentive crowd. He told us he’d done a bit the last few days where he introduced the members of Darlingside by revealing which Winnie the Pooh characters represented them best. He was joined on stage by Eric Maier on keys, Walker Allen on drums, and Willoughby Morse on guitar, and I liked the fullness of sound they produced together. 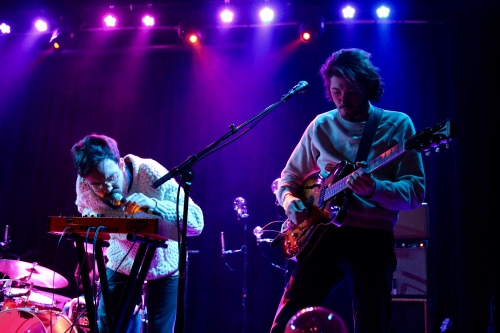 I’d never heard a Henry Jamison song before this show, and his songs are heavy and cerebral. I enjoyed him live. I looked him up after the show and saw a lot of praise for his debut album, The Wilds. The Guardian called it “a rare thing:  an unshowy, literate gem.” Henry joked about being the cover of the Portland Phoenix. The title of the article is “The Man, The Myth.” Henry joked that “the myth is that anybody knows about me.” I learned that Henry’s song “Real Peach,” which he closed his set with, has over 40 million streams on Spotify.

Henry’s next album, Gloria Duplex, comes out in February. Promotional material about the album from his publicist’s website says it’s “Henry’s razor sharp-focused look at masculinity in 2018.” I was also not at all surprised after seeing him live to also learn that his father is a classical composer and his mother an English professor. The apple hasn’t fallen far from the tree as far as vocation goes.

Darlingside took the stage to a pretty full house. I had time between sets to chat with Elise (who I’d met in the very same spot up front last fall at an intimate show with Shovels & Rope) and her sweetie, Stuart, who’d never seen Darlingside before. Darlingside is Don Mitchell, Auyon Mukharji, Harris Paseltiner, and Dave Senft. Their star is especially rising in 2018 with their first NPR Tiny Desk Concert, first appearance at the Newport Folk Festival, and a run of tour dates opening for Brandi Carlile. Dave thanked Henry for opening the show and told us–“I listen to Elton John when I’m happy and I listen to Henry Jamison when I’m sad, so I’ve come to associate Henry with my own sadness,” which I thought was a beautiful compliment, really. 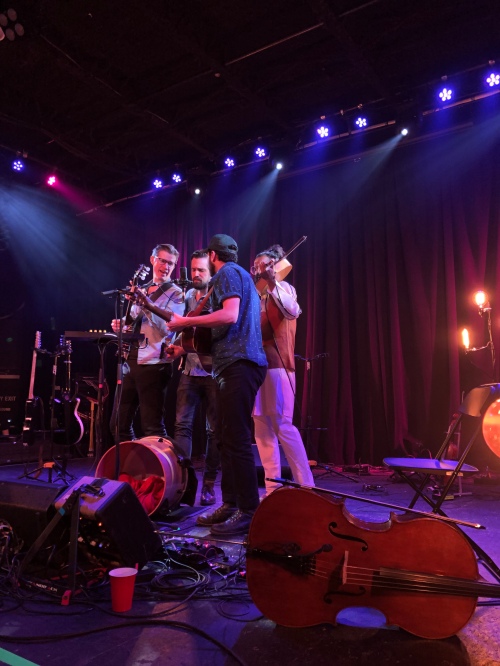 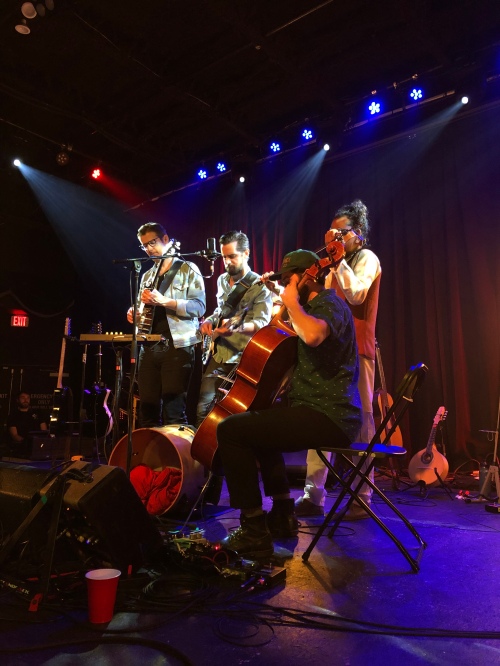 The guys are a united front and are clearly great friends. They met at Williams College and have been a group for nearly a decade. Sam Kapala, their drummer for the first four or five years as a band, lives in Portland and was at the show, too. Without Sam, Darlingside is four guys with string instruments (and an occasional kick drum and tambourine) around a single microphone. I’d call their genre indie-folk, which is why what happened next was especially frustrating.

Here are a two paragraphs about concert etiquette. We’d all noticed at the end of Henry’s set that two women next to us who were standing at the end of the front row against the far wall were talking a fair amount. It’s always confusing to me when people buy concert tickets and have full voice conversations near the stage when musicians are performing. It’s disrespectful to the artists and to their fans. Someone near us finally said something to them. He asked them to please stop talking so we could hear the band. I heard it. It was innocuous. One of the women broke down sobbing in response. She sobbed for five straight songs. I haven’t seen anything like it at a show. Her sobs were almost as loud as her talking was, and we could all still sadly hear her over the band.

Another group of people pushed their way to the front between sets as people often do. If you really love a band, you should always get to the venue early and get a spot you’re happy with. It’s not fair to fans who arrived early to push your way through the crowd and cut in front of anyone. In this case, a family with young children was front row center, and this trio pushed their way right up to them and hovered immediately over them for the rest of the night. You might assume this move meant they really love and respect the band and wanted to be closer, but I know from experience that it usually doesn’t. They chatted loudly with one another from their front row center spot immediately underneath the band while Darlingside played and while fans nearby tried to listen. When members of the band bantered with the crowd, one of the women in the group responded back very loudly to every single comment as if she was having a private conversation with them. Don’t be that fan who demands attention from the band and interrupts their flow. Wait until after the show and say hello to the band at the merch table instead.

I’ve got to say that for a folk-ish show, I had a really hard time staying focused on the music, and I was touching the stage in the front row near the band. An audience has the power to make or break a concert experience. Towards the end of their lovely set (distracted or not, they’re amazing), Darlingside unplugged and jumped off stage to play a new song from the center of the room in the crowd. They’d played many songs from their 2018 album, Extralife, but closed with “God of Loss,” which is a favorite of mine. They came back to the stage and left us with “Best of the Best of Times” from Extralife, and you’ve got to check out the awesome (as always) video. 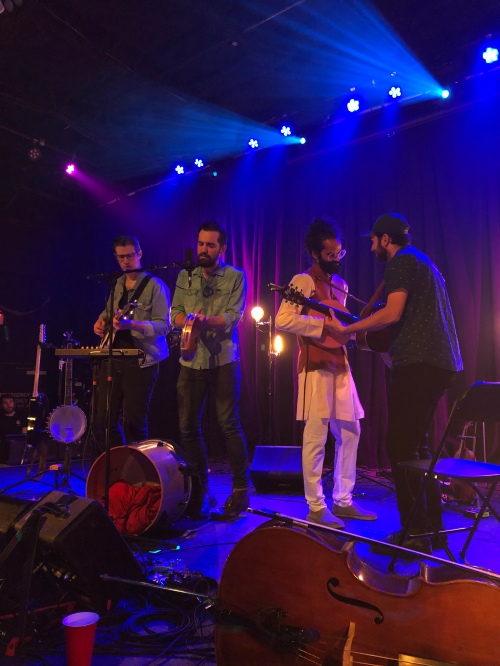 Darlingside is always a treat to see live and I feel lucky we’re still able to see them at an intimate venue like Port City Music Hall. See you guys next year!