This night caught me totally by surprise. Both bands were utterly impressive, and this was definitely one of the top shows I’ve seen in 2012. If you haven’t heard of Darlingside or Tricky Britches before—if you haven’t listened to them, but especially if you haven’t see them live—let me be the one to encourage you to check them out!

I got a very nice email from Sam—Darlingside’s drummer—about a month before their show saying that they’d stumbled across my blog and wondered if I might be interested in being on the guest list for their show. Those are the kinds of emails I like to get! I had already seen they were coming to One Longfellow Square, and my dear college friend, Ben, had actually sent me a link to their incredible “Terrible Things” video a couple of weeks before Sam’s email arrived. Ben grew up in the same town as Don Mitchell, Darlingside’s guitarist, and apparently even used to baby sit for him. It’s such a small world. 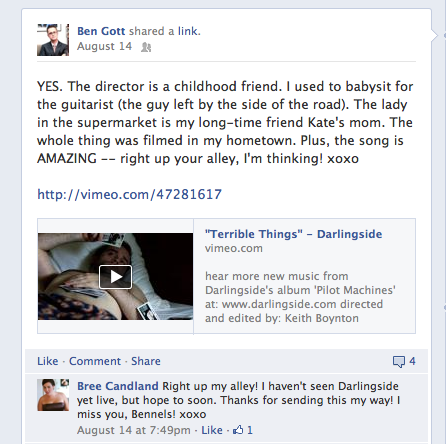 I hadn’t seen my friends Max and Sophie for a long time, so we made plans to grab dinner at Local Sprouts before I made my way over to the show. After I ordered, I turned around and immediately recognized Auyon from Darlingside’s video. I introduced myself and Sam knew who I was (which I appreciated) and we chatted for a quick minute. I wished them a good show and found a spot for a leisurely dinner with Max and Sophie.

I got to OLS just before Tricky Britches was supposed to go on. There was a seat in the middle of the front row that was open, so I grabbed that and settled in. I couldn’t help but overhear a man proudly talking about his son Tyler (Tricky Britches’ fiddler) with some women sitting behind him. It was adorable. I learned that three of the guys are old friends from Gorham High School and have been playing together for a really long time. If I hadn’t overhead Tyler’s proud papa, I still would have figured that out. Talk about chemistry. The guys have an obvious rapport, and it is abundantly clear that they’ve had years of serious practice. Their music is fun and feels casual, but their quality musicianship is no accident. I was seriously impressed by their cohesive, polished sound.

I want to concur entirely with how Tricky Britches describes itself on their Facebook page—“Tricky Britches is a high-energy string band hailing from Portland, Maine. From their roots of playing heel-stomping old-time fiddle tunes they have progressed into a fusion of classic bluegrass, country, and folk rock.” If you like a bluegrass sound—blends of guitar, upright bass, banjo, fiddle, and harmonica—these guys are right up your alley. They were funny, too, introducing themselves as “Alison Krauss and Union Station.” (PS—I’ve seen Alison Krauss and Union Station, and TB would be a superbly appropriate, capable opening act for them). I liked TB’s mix of originals, mountain songs, and covers. “Bear” (Ryan Wilkinson) took the lead on Grateful Dead’s “Brown Eyed Woman.” Everyone could sing! There was lots of toe tapping and clapping along with the music. I’ve rarely seen an opening band bring that much energy and enthusiasm. Here’s a video of Tricky Britches performing “When the Morning Comes” so you can get a taste of their sound. 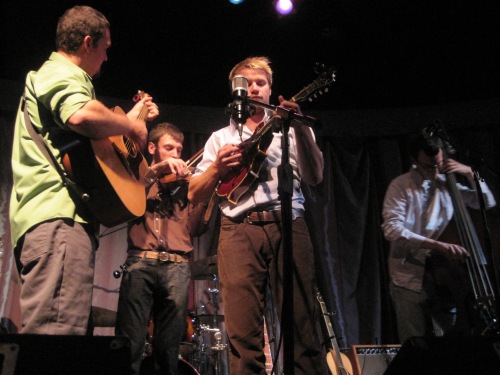 I thought their original song about “Big Ass Beers” on Bourbon Street in New Orleans was hilarious. Tricky Britches plays weddings and events and a bride this summer asked them to play a waltz not about death, etc., so they changed the words to make a happy version of another song and now have a go-to love song called “By My Side.” They played Hank Williams’ “Tennessee Border” for Jed’s gramps who was sitting behind me. I met him before the show and he was a sweetheart. 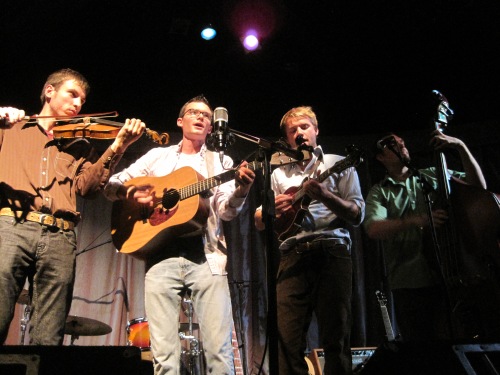 Talk about a band that really gets the crowd warmed up! I never miss an opening act, but I’m rarely so sad to see them go. I’m also completely sold on seeing Tricky Britches as the headliner. I loved the ease they showed on stage with each other and they were a complete blast. Their friend Jake Hoffman joined them on banjo and they wrapped their high energy set with “Stay All Night.” Tyler, Seth, Jed, and Bear—thanks so much! I’m excited to see you guys again!

During the break between acts I introduced myself to Don from Darlingside and chatted about our mutual friend Ben and Don’s plans to move to Portland in the near future (pending criminal check by his landlord, apparently). I’m excited that two of the five guys will be in Portland, because I am already really looking forward to seeing them often.

I took very few notes during Darlingside’s set, and that’s because I was completely mesmerized. They call themselves a “string-rock quintet,” and I wouldn’t be surprised if they had been in an a cappella group together at Williams College. Their harmonies were flawless and beautiful. The fullness of sound they were able to achieve with five voices and guitars, violin, cello, drums, and mandolin was surprising and breathtaking. I was sold from the first moments of their first song. 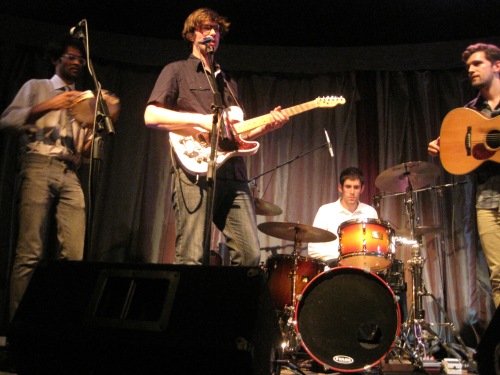 Auyon Mukharji, David Senft, Harris Paseltiner, Sam Kapala, and Don Mitchell are all individually accomplished and impressively talented musicians. You can read about their backgrounds on their Facebook page or on their website. They say about themselves, and I completely, totally agree—“together, the five close friends are a powerhouse of vocal, instrumental, songwriting and performing talent.” I was blown away. 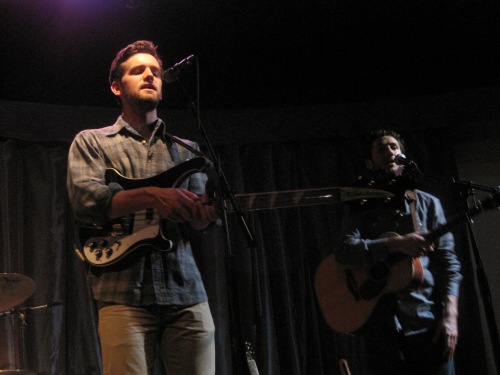 I didn’t just like their sound and stage presence (they were chatty and all smiles), though—I also liked their lyrics. They played “The Catbird Seat” early on, and I loved the lines “And all the things I ever owned/Were in boxes I borrowed.” I liked “The Woods” and “Malea,” too. “The Catbird Seat” and “Malea” are from Darlingside’s EP 1, released in 2010. Their newest album, Pilot Machines, came out in July of 2012. Darlingside calls the album “an insistently melodic collection of new songs that feel both familiar and ground-breaking.” I have to agree. Auyon, who plays violin, gave me a copy for my long ride home from One Longfellow. I haven’t taken it out of the CD player in my car yet, and spend about an hour listening to it during my daily commute.

There was an instant camaraderie between Tricky Britches and Darlingside. They have the exact same GMC tour van. TB’s is called Van Buren and Darlingside’s is Chauncey. They seemed like a good fit musically, too, and will play together again at Club Passim in Cambridge, MA on November 13. Boston friends, I highly recommend you get out to this show!

I was surprised to learn that Darlingside has only been together for three years—two of which they spent living together in Northampton, MA. They wrote “The Company We Keep” about living together and living the dream—“the smelly, smelly dream.” I loved their cover of The Smashing Pumpkin’s “1979.” I was amused to learn that the working title of the first song they ever wrote was “Turtle Sock Tree.” I think they were wise to change the title to “In The Morning.” They closed their impressive set with one of my favorites, “Blow the House Down.” It didn’t matter to me that it was a school night and I was an hour from home—I would have been content to stay much longer. What a fantastic musical find. I am already looking forward to seeing them again—and often!

I wonder if there’s a single clear photo of Auyon–he’s always on the move! Auyon, Don, and Sam.

I got to talk to almost everyone in both bands after the show. I usually don’t like chatting with people in bands because I get very sad if I love their music and they turn out to be unfriendly (I have a list, but I’ll keep it to myself). I didn’t worry with either band. Their ease and grace on stage were evident. Everyone was incredibly nice and responsive to my probably overbearing praise that I surely gave because I was so caught off guard and impressed by both bands. I hope you’ll check them both out and keep them on your radar so you can take in a live show!

Like I said earlier, Auyon kindly sent me home with their newest album, Pilot Machines. I love it. I’ve been thinking for two weeks now about what songs are my favorites. I really like the whole thing, but I’m most drawn to “Blow the House Down,” “Terrible Things,” “The Ancestor,” and “Sweet and Low.” “Sweet and Low” features vocals by the fabulous Caitlin Canty, who I was fortunate to see with Jeffrey Foucault at One Longfellow Square months ago.

Check out their music, but don’t miss the fabulous, creative videos made by Crazy Lake Pictures for “Terrible Things” and “The Ancestor.” I love “Terrible Things” even more because of how incredibly creative and intriguing the video for it is!

Thanks, Darlingside, for the invite! I’m looking forward to seeing you again really soon!