*You might remember me as the girl who used to write a live music blog. I am so behind that instead of just doing one post at a time (the smart thing to do), I just let them pile up and got overwhelmed at the idea of writing anything. Sorry about that. Here’s post one of seven that I’ve meant to write over the last couple of months. It’s just in time, too, because I’m about to head to the Newport Folk Festival in a few hours. Next week, I’ll see Run on Sentence, Yeasayer, Mumford & Sons, Dawes, and Ben Sollee. So if I don’t start writing now, it is only going to get worse!*

I saw Jeffrey Foucault and Mark Erelli at One Longfellow Square in December of 2011. They shared the stage the whole time and went back and forth singing each other’s songs. What I remember about the night was that I wanted to see Jeffrey solo. He has something special for sure.

I’d had a busy day that day—shopping for gifts for my senior class officers, an impromptu dinner at Scarlet Begonias in Brunswick with great friends, and I even ran into one of my former students who is off to law school in California in the fall. I got to One Longfellow about half a song late, but just in time to find one of my colleagues, Grace, and her sister, Nina, sitting in the front row.

Brookyln’s Andy Friedman opened the night and reminded me so much of Johnny Cash. He wore a button up shirt, vest, boots, and had slicked hair. He strummed slowly and played a lot of songs off his album Laserbeams and Dreams. Jeffrey came out and played a couple of songs with Andy. Andy put out an intense vibe that was offset by his jokes in between songs. I especially liked his last song, “Going Home.”

Jeffrey Foucault is originally from Wisconsin and now calls Western Massachusetts home. His bio on his website shows he’s had a really interesting and unique life. Those experiences have certainly given him a lot of fodder for his songs. JF is a singer-songwriter—folky, a little country, delightful. Do not miss the chance to see him live. Also, the man could be a model. I wouldn’t be surprised if he’s modeled professionally at some point. Not that it matters, but it means I will always want to sit that much closer to the stage at his shows. He also dresses to impress—in vintage boots, a suit jacket, and cowboy hat.

I like everything that comes out of Jeffrey’s mouth—he is a poet and his music is evocative. I especially liked “Tea and Tobacco,” after which JF invited singer-songwriter Caitlin Canty to the stage. He said he’d taken her to sushi for dinner, so she really had no choice but to sing for us. Caitlin was in Portland from Vermont working on a new record and her voice is beautiful. Being introduced to her was a real treat that night. Check out her song “Thorn.” Here’s a newer video of “Thorn” that’s really lovely, too. She sang a couple of songs with JF, including the haunting “Heart to the Husk,” that includes the heavy lyrics “Please burn my letters/Let them writhe/The love and the lack/Let the blue meet the black/Let my words become fire.” Caitlin’s voice added just the right touch. Fun fact: Andy Friedman, Jeffrey Foucault, and Caitlin Canty all have a song called “Idaho.” JF’s “Idaho” is on his newest album, Horse Latitudes, which is fantastic.

Jeffrey is a family man and talked about his 4-year-old daughter a couple of times. He said that one of his “favorite things” about having a super verbal kid is that she remembers everything he says and repeats it at the worst possible time. He also said they’d been singing together over breakfast in the morning. Super cute. JF is married to the uber talented singer-songwriter Kris Delmhorst. She is not to be missed.

Cold Satellite, JF’s seventh album (the one before Horse Latitudes), was written in collaboration with poet Lisa Olstein. He took fragments of her writing and unpublished pieces, and added words and music. He played a song that he said was about a guy who gets eaten by a bear. JF asked if anyone had any requests, and someone asked for “Cross of Flowers.” Here’s a video (it’s cut off at the end, but very funny) of JF and his wife Kris Delmhorst singing “Cross of Flowers.” 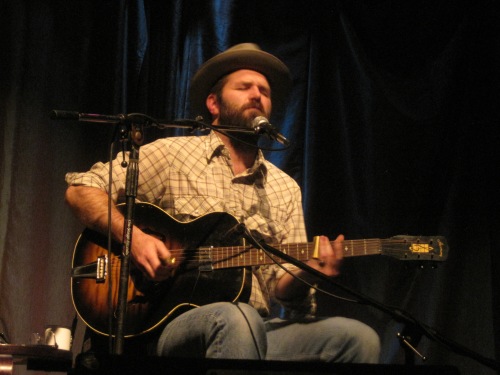 JF closed the intimate night (there couldn’t have been more than 25 people in the audience) with “Everybody’s Famous” that he played for his buddy Steve who’d driven him the show, helped him set up, and had even helped him plant potatoes that morning, and closed with “Train to Jackson.” Even though we were a small crowd, we were appreciative, and JF obliged us with a beautiful unplugged encore—“Northbound 35”—with the help of Caitlin Canty.

I got to talk to Caitlin for a bit after the show and she was a delight. And Colin from anna & the diggs was running sound at OLS that night. There’s so many talented musicians in Portland—I guess you never know who you’ll run into. How lucky are we to have that going for us?!