I first saw Jonny Corndawg perform at Belfast, Maine’s United Church of Christ during 2011’s Belfast Free Range Music Festival. I saw 10 shows in 10 hours that day, and had to make choices about which shows to attend. There was a lot of buzz that day about Jonny Corndawg, so I made sure to catch his set. I didn’t know what to expect, and I was surprised by Jonny’s psychedelic country music full of simple stories that made me laugh. His music caught me off guard, but I totally dug it. I saw him again in November in Portland opening for super fun bluegrass band, Trampled By Turtles. My friends Max, Sophie, and Mike joined me for that awesome, high energy show, and they were totally on board with seeing Jonny again when he came back to Portland at the end of March. It’s nice to have things you can depend on like a guaranteed great show—like taxes being due in April, my cats inevitably waking up and getting a surge of energy just as I’m trying to sleep, and my students getting a little rowdy at the end of the day on Fridays. I can’t imagine hearing about Jonny having a show in town and not going—and I can guarantee you’ll have a good time at one of his shows.

My friend Mac (who introduced me—hallelujah—to The Civil Wars well over a year before anyone else I knew had heard of them) posted a video of rocking country duo Shovels & Rope on Facebook a few months back, so when I heard they were opening the Jonny Corndawg show, I was really excited. Add to that Robert Ellis playing a short set, too, and I was pumped. He and Jonny will both be at the Newport Folk Festival this summer, and I am already looking forward to seeing them again.

Sophie made us an awesome dinner at the beautiful house in Deering she and Max were tending. We watched Kentucky beat Louisville in the NCAA final four (my bracket was toast early in the process) and started watching the Kansas/Ohio State game and had to  rush out of the house when we realized we were going to be late for Robert Ellis. We all expected, based on our last Jonny Corndawg show experience, that Empire Dine and Dance was going to be packed. We were very surprised when we arrived a little late because there was so much space at the front by the stage. I think we sadly missed a few Robert Ellis songs, but I’ll see him again this summer, so I can live with that even though I have a firm do-not-miss-the-opening-act/s policy. Robert sounded beautiful on acoustic. I loved his cowboy boots and buckle. His voice has a beautiful tone. He was very nice to the crowd and thanked us for watching his set. I was a little bummed for him because there weren’t as many people there as I would have liked—Robert Ellis is definitely worth the notice. His second album, Photographs, was named one of the top albums of 2011 by American Songwriter Magazine. Check out his performances at American Songwriters’ studio. Robert’s folk/country sound is totally up my alley, and I particularly loved one of his songs about growing up in the Bible Belt that includes the telling line “nobody talks too loud in my hometown/Nobody stands too tall/for fear of being knocked down.” As he cleaned up his equipment, I was able to lean in to tell him how excited I am to see him at the Newport Folk Festival this summer. He flashed a smile and said a genuine “thank you”—very sweet. I hope you’ll check out his music. 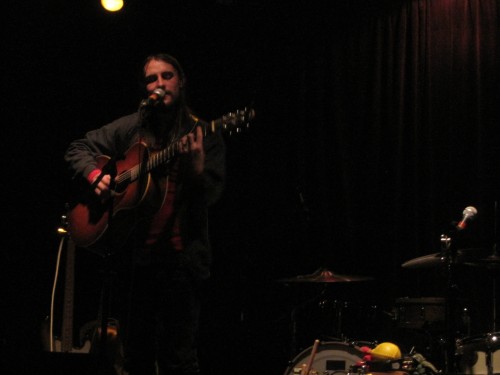 I could hear Cary Ann from Shovels & Rope before they took the stage. People had started to crowd the stage in anticipation of their set—clearly they are a draw—and Jonny was behind me near the merch table introducing her to his parents who’d come to the show (yes, insert the “aw” here—it was a late show, too, so good for them!). Her southern accent is thick and she was so excited to meet Jonny’s parents. You can’t miss her fiery red hair and strong personality. I was so ready for their set to start.

I think it’s the social studies teacher in me, but I really like a little context. Straight from their website, “Shovels and Rope is a Charleston, SC band consisting of Michael Trent and Cary Ann Hearst. Formed in 2010, they sing harmony driven folk, rock and country songs using two old guitars, a kick drum, a snare, a few tambourines, harmonicas, and and maybe a little keyboard sometimes. They tour constantly as a two piece, making as much noise as they can.” They met in “Athens, GA 2003 on tour with Jump Little Children. Years later we put together a band to make some money in the bars in Charleston. We went on the road in late 2010 and have been traveling since then.” [I saw Jump, Little Children open for Guster in 2001 and LOVED them!] 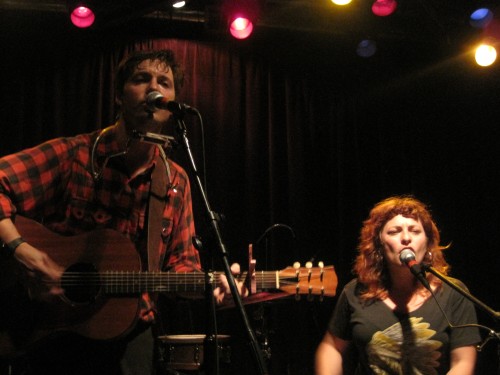 These two make A LOT of beautiful noise. There is so much power in their presentation. I think anyone who sees them live will be instantly hooked by their charisma. I’m really looking forward to their new album in late July. Here’s a link to the teaser trailer for The Ballad of Shovels and Rope—a film about the making of the new album. I think it gives you a taste of how down to earth and hardworking these two are. The crowd was really into Shovels & Rope and happily bounced along to the rockin’ music. I especially liked “Boxcar,” Gasoline,” and “Bad Luck.” Cary Ann and Michael have a lot of chemistry and played off of each other—they have a clear connection and have a blast on stage. If you don’t know Shovels & Rope, please check them out. If you can see them live, do. 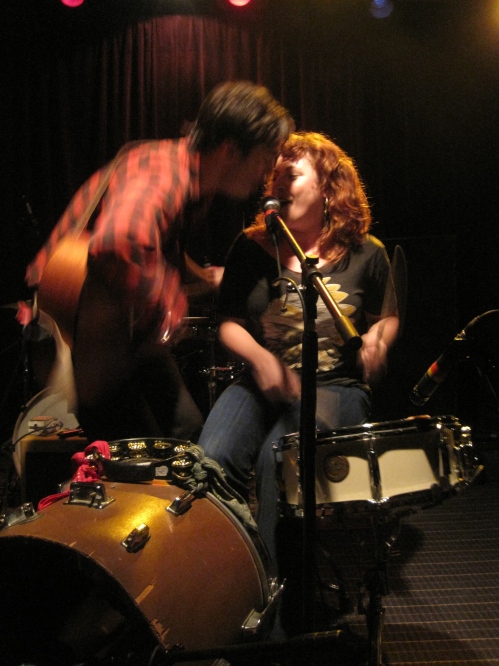 A lot of love here.

Cary Ann and Michael quickly packed up their equipment and Jonny Corndawg and his band took the stage. Robert Ellis joined them on guitar, too, and I was glad to see more of him. I don’t have the right words to describe Jonny’s music. It’s country for sure, and I get the impression that he writes a lot of his songs based on moments from his everyday life. “Dog on a Chain” is an example of what I mean. I bet he literally saw a dog on a chain and wrote the song that goes “I’m just a dog on a chain/and burden’s my name/and no on pays attention/to a dirty old dog/my owner is a man/who works way too hard/but I need attention and exercise.”

I was really impressed when Jonny introduced Robert Ellis to the crowd again. He said he didn’t think the crowd paid enough attention during his set (I agree). So he told us to Wikipedia him to see how big a deal he is. He introduced the members of his band and told us to get out our iPhones and look them up because they are all well-known musicians. I loved the loyalty that moment showed. 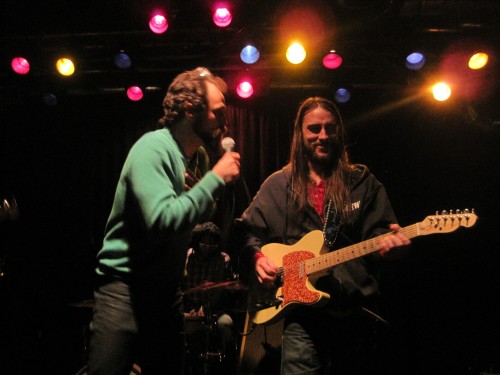 The crowd was happy to bounce along to “Life of a Bear” from Jonny’s last album, Down on the Bikini Line. I love his random songs about random things. “Life of a Bear” goes “Big bear on the forest park/looking for a tourist he can tear apart/and bring back home to his family and friends/little bitty brown bear walking through the forest/finding little berries on berry trees and eating them/this is the life of a bear.” Jonny came to the very front of the stage (so just inches from me) and knelt down and serenaded us up close. It was magical.

Cary Ann came out for a song and they sounded great together. It must be quite interesting for her to be the only woman on the road with all of those guys! She seems like she can handle it, though. “Shut Up” sounded GREAT and everyone got a little time to solo on their instruments—keys, drums, fiddle, bass, and both guitars. 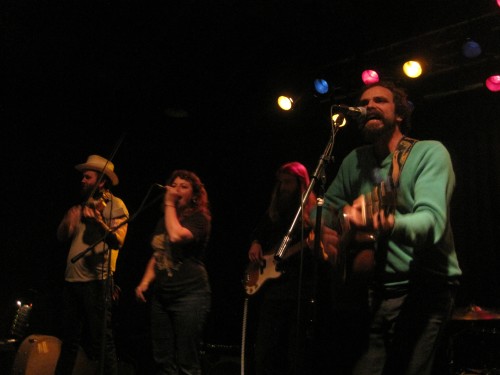 Cary Ann and some of the boys

It’s time for another concert etiquette moment. There was a girl rocking out to Shovels & Rope. She left after they packed up. She came back during Jonny Corndawg’s set. Her male friend wanted to join her up front. He decided it would be fun to be creepy and push his way to the front and grind with women in the crowd. He did this to me. In the front row. A few feet from Jonny Corndawg. I pushed him off of me (he did have great pecs, so I guess he had something going for him there) and told him “Go.Away.Now.” All of the people around me were impressed because he listened. I’m so glad I’ve had all of these years to practice my “teacher look” and the accompanying “teacher voice” to use in these instances. Oh, so a note to people who push their way to the front or inappropriately touch strangers—don’t do that. The best part is that the fiddle player saw the whole thing go down and gave me a knowing nod when I got rid of the guy. I did not make this moment up. I have witnesses.

Some of my favorite things about the band that night:  four of six of the guys had beautiful facial hair, basically everyone had cowboy boots on with the notable exception of Jonny who had on his trusty New Balance sneakers, and they had a clear chemistry and a great time up on stage. Jonny is working on his next album, Dad Country, with the help of backers through Kickstarter. Dawes (who will also be at The Newport Folk Festival again this year) is the backing band on the album. Incidentally, Jonny’s wearing the same green sweater in the Kickstarter photo that I’ve seen him wear the last two times I’ve seen him perform (even Max noticed that and he’s a guy).

Jonny did “Trash Day”—definitely one of my favorites and a song that he told us at the last show is for anyone who’s ever been in a relationship. It was one of the last songs of the night and he literally climbed the rafters and scooted across the ceiling above the stage. There’s some stage presence for you! I think he finished up with “Ain’t It Your Birthday.” I loved seeing Jonny get off stage to thunderous applause and get a big hug from his dad at the edge of the stage. I was impressed that his folks were awake after midnight, for that matter.

Jonny was a little under the weather and losing his voice. He came back on stage for two quick a cappella songs, including one by Jimmy Cousins. It was bittersweet because I always hate to see Jonny leave the stage. He is such fun to see live. Definitely check him out next time he’s in town. I’ll be up front and hopefully the guy with the great pecs will be nowhere in sight. I feel like that experience would make a good Jonny Corndawg song, actually.