I finally got around to posting some pictures from spring and summer on Facebook about a month ago. In that album was a photo I took of my dear friend and mentor, Maryli Tiemann, at her poetry reading back in May. It was by far the most popular photo in my album, getting “likes” and comments from her former students, colleagues, and friends from all over the globe. Maryli taught English, speech, and drama at Morse High School in Bath, Maine for 27 years. I had the very good fortune of having her as my student teaching supervisor at Bowdoin College in the spring of 2001. When asked to identify a teacher who has had a lasting positive impact on their lives, I know a lot of us think immediately of Maryli (and many of her husband, David, too!) Many people commented that they’d like to know about the next time she was reading her poetry, so she obliged and told us (humbly) that she was slated to read again in a few more weeks. At her reading in May, which I thoroughly enjoyed, I was forced to reconsider my preconceptions about poetry. I had always thought that I didn’t really like poetry, but I really liked Maryli’s. When I thought more about it, I realize that poetry and song lyrics (which are crucial to me) are really the same thing. I decided to give poetry it’s just due and post about her September reading on my blog.

Maryli reading at Harlow Gallery in May

There was a full house at the lovely Harlow Gallery in Hallowell (conveniently close to my house), where poets Ted and Ruth Bookey organize monthly readings. I chatted with David and Maryli and mingled with their friends until we took our seats and heard from Jim Breslin. I loved his brief, rhyming poems. I was surprised by how much he could say in so few sentences. He told us about the Maine Poets Society and joked that he is much more able to take criticism on his writing because he’s been married for 46 years. He considers himself a dark poet and really started writing to cope with the unexpected death of his son. It seems that’s been a long and unending journey for Jim, and I was moved by a poem that seemed to be about home life since his son’s death. It included a phrase that stopped me cold—“You sit here beside me/We each sit alone.” His poems were decidedly heavy and evocative. I thought it was brave that he shared them with us, frankly. 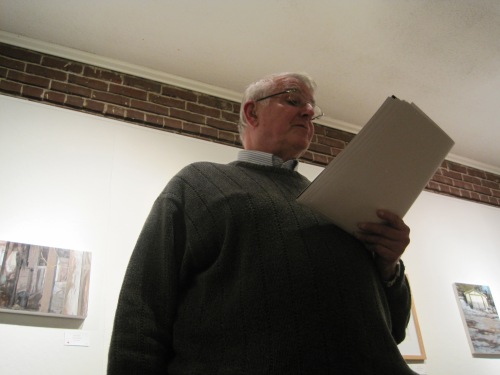 Linda Alrich was up next and she impressed me right away with her effervescence. She read an amazing poem, “The Woman Without Arms” that was both poignant and hilarious. I had hoped I’d be able to find it online to post for you, but had no luck. I remember it being about a woman who was always doing her duty and sacrificing herself for others until she had literally nothing left to give. I won’t give away the ending, but it resonated. That fantastic poem from 2000 earned Linda an Emily Dickinson Award from Universities West Press. She has published Foothold and March and Mad Women, which I suspect are both full of gems.

She read “My Composition Class Meets in the Psychology Lab” and told us it was about how she received the news of her mother’s brain tumor and immediately had to go teach a class. She said any teacher knows that no matter what is going on in our lives, the show must go on. She is so right, even if our students are polite enough to pretend they don’t notice something is wrong from time to time.

I loved “Penmanship” and “Derivatives of Common Endings,” which I was able to find online to share. Linda said she’d found a shorthand dictionary in a shop and it had belonged to a woman more than a half century ago. She passed the book around like show and tell, too. I loved the touch. Here it is:

Shorthand is not choreography

of an immobile heart,

not the lying lines you write to your mother.

than where you came from:

and a back yard,

its heron neck to look straight up without eyes.

than your proverbial head

the spiral down to where your name lies curled

lies curled on his shoulder

Shorthand is a knot

untying itself, the balloon string

as it leaves the birthday party, clothespins

a dangled direction into which you find yourself running.

It is about going somewhere:

the way a grape tendril looks

for the loose stone or the way waves nudge seaweed up

along the edges of continents,

the beaches lined with script too large

to be seen from land

though you know what it says.

Linda revealed very personal autobiographical information both in her introductions and in her poems. I’ll leave the details to her, but she told us about her challenging childhood and how she’d never been on a date before she studied abroad in France in college. I loved how dear her poems were and how they were so personal. Towards the end of her time she read a poem about birds, and I especially liked the line, “I believe the geese are pointing to something.” We took a break after Linda’s reading, and I was able to tell her how much I’d loved her work. She said she was glad I’d been sitting so close because I was really expressive during the reading and gave her good energy.

After our brief intermission complete with cookies and apple cider, we reconvened and Maryli took center stage. She started with what she called her “seasonal” poems and read one about spring. I loved and totally “got” “Hanging Out” about a gaggle of middle schoolers. I enjoyed her “rural” poems that praised “the wisdom and perception of rural life.” It might help to know that Maryli grew up in Flint, Michigan—a grandchild of very poor farmers.  Maryli told us that a lot of her poems are what she calls “magic” poems because she finds herself in awe of ordinary things all the time. As a friend of Maryli’s, I can assure you that’s a fact. It’s one of my favorite things about her, actually. “Fifteen Minutes” falls under the “magic” poem category. Here it is:

We’re late and though I can let it be and be with it,

She’s stiff and silent, tapping the purse on her lap.

Driving brings us past a garden brimming with iris.

I slow way down, almost to a stop –

So we can soak in a row after row of

“Aren’t they something?” I exhale. She turns and

Coaxing her hands to rest. “They are lovely. Lovely.”

Easing past this garden, our gaze is drawn to a

No, eating leaves off a low hanging tree branch.

Wait. No ornament reaches up!

What would not have happened

We’d been on time.

The fabulous Maryli Tiemann was all smiles after a glowing introduction

I also LOVED “Burning Irony.” Here it is:

Ever notice that it’s easier to:

Smell a burning pot from another room

Save leftovers in the fridge till they get moldy

Stop eating ice cream if you’re not holding the container

Detect bad breath when someone kisses you

Be obsessed by your own pimple

Remember your own birthday

Sleep with your own pillow

Select a present YOU would love

Drip mustard on a white shirt

Forget where you put your keys, glasses or wallet

But remember were you parked someone else’s car

While we burn toast, cookies and “bridges” behind us

To breathe when you’re walking

To yawn if you’re listening

Maryli talked about being from Michigan, which she left when she was 21 years old. The rest of her remaining family still lives there. It’s hard to go home—especially when you move to and become immersed in another culture even if that’s just in another part of the country. She shared her poem “Selkie,” which comes from Irish folklore. Selkies are seals that shed their skins and turn into women a few times a year. The legend says that if you can capture her skin she can’t return to her natural state or to her home in the sea. I loved her poem “Photographs” about the overflowing leather box of family photographs that she got from her brother after her parents died. She joked that her “folks had a throw out disorder like you read about.” As Maryli doesn’t waste anything, I can only imagine what her parents were like. The poem was touching but also made me laugh. 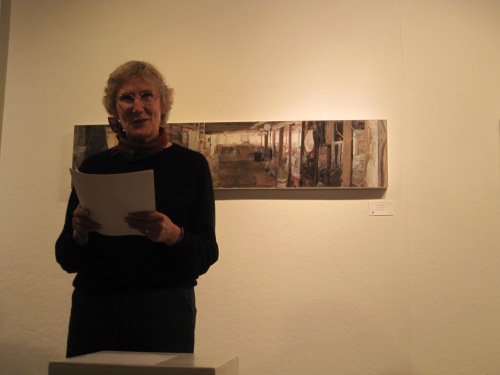 Ted and Ruth asked all three poets to do a Q and A after Maryli’s reading. I found the conversation that followed—a dialogue between also riveted audience members and the panel of poets—enlightening. Jim joked that “Emily Dickinson is kind of light” compared to his poems and admitted that the grief that many of his poems are about is never manageable. Linda went into thorough detail about her home life growing up and the challenge of making decisions about what to publish about her family and what to keep private. Maryli summed up the evening in many ways, getting to the heart of what poetry does for many writers when she said, “sometimes I don’t know what I think until I see what I’ve written.”

Q + A with Linda Aldrich, Maryli Tiemann, and Jim Breslin

What a lovely night. I feel grateful for the gift of honest, lovely, humorous, and heartbreaking words and stories that were offered to us that evening.