My concert buddy Monica and I saw the fabulous Martin Sexton a few nights ago. After the show, she asked me how I’d liked Kaki King—a show she’d recommended to me. She inspired me to get writing! Thanks, M!

I’d been a little on the fence about going to a show on a Tuesday, but Monica had encouraged me to go and my friends Kevin and Hedda were planning to be there, too. It was drizzling as I stood outside SPACE Gallery. I got there early because I’d inexplicably never seen Lady Lamb the Beekeeper live before and wanted a good spot. Like a lot of Mainers, I’d known Aly for years because she worked at Bart & Greg’s DVD Explosion in Brunswick. She talked at length about that job and her songwriting in this Maine magazine feature. I’m embarrassed to think about how many times I returned a truly bad romantic comedy to her now that she’s a big deal on the music scene, even showing up in Rolling Stone magazine. Like you, I am so happy for her. After seeing her live show, I realized just how well deserved her accolades and success are.

The room was packed as LLB took the stage. She opened with “Up In The Rafters,” which is an incredible a cappella piece. You could have heard a pin drop through the whole song, and essentially through her entire set. I especially like the line, “”I want to know you like the clock knows the hour.” I loved “Bird Balloons.” It was musically interesting and layered. The lyrics were honest and compelling—“This is my loss of love/my loss of limb/You were my friend/and now/I’m a ghost and you all know it.”

LLB told us that “Milk Duds” was one of her first songs. She wrote it at her first apartment in Bath, Maine during “that time in your life when you’re young and waste money on candy.” What I loved about Aly’s set was how thrilled she was to be on stage. She told us again and again how happy she was to be home. She called out people in the audience she knew by name and was genuinely happy they’d come to the show. You all know how much I love friendly banter from performers and hearing what songs are about. LLB made me so happy on both counts, and I loved her songs to boot. 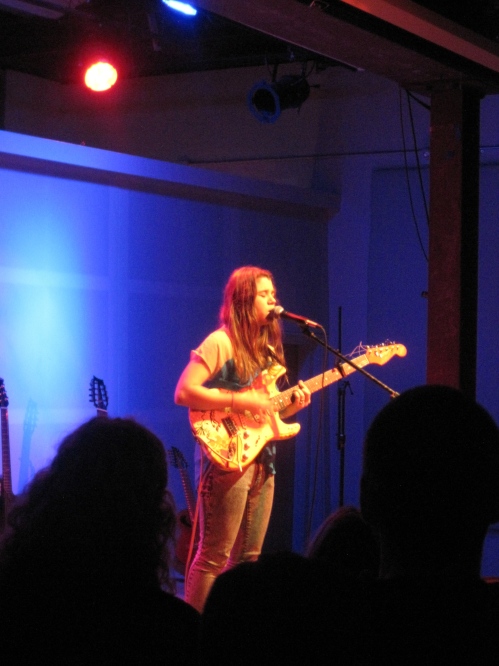 She was beaming when she said, “Even without my glasses, I can see that everyone I love is here.” She announced that she’d be back again from Brooklyn to release her studio album at SPACE Gallery. The show will be March 2, and Xenia Rubinos and Cuddle Magic will join her. Check out Sam Pfeifle’s review of Lady Lamb the Beekeeper’s first studio album Ripely Pine in The Portland Phoenix. Also check out Hilly Town’s pictures from the evening.

LLB pointed out Dilly Dilly in the front row and told us she’d sung harmony vocals on the upcoming album on “Little Brother.” I thought Dilly Dilly might hop up on stage and sing with her, but maybe that’s for the next show. LLB thanked everyone at SPACE profusely. She said that SPACE is her favorite venue in the world—where she got her start. She was really happy to be there with us at the end of her first US/Canadian tour. You wouldn’t have been able to tell at all that this was her 30th or so show of a tour because her energy was so warm and upbeat.  She thanked us again and closed her six-song set with “Crane Your Neck.” The crowd was incredibly attentive the entire set. I realized when she took her leave just how mesmerized I’d been by her performance. I was not alone.

There was a brief intermission during which half of the crowd left SPACE and Kaki King’s touring manager set up the stage. This was definitely a LLB audience. I was excited to hear Kaki King live. My friend Greg had introduced her to me a while ago on a mix CD. I realize now that I was wholly unprepared. It’s probably better that I didn’t know more about Kaki King’s music, because I would have skipped the show and missed Lady Lamb the Beekeeper’s lovely set. Here’s what totally threw me—Kaki King played beautiful song after beautiful song on lots of different guitars, but didn’t sing at all. I am drawn to lyrics. I was lost.

She bantered with the audience well at first and I appreciated it. She is quite petite, so when she sat down to play she asked all of the short people to move to the front if they were interested and for everyone to check behind them to see if someone shorter was behind them with an obstructed view. I thought it was a really considerate and awesome move! 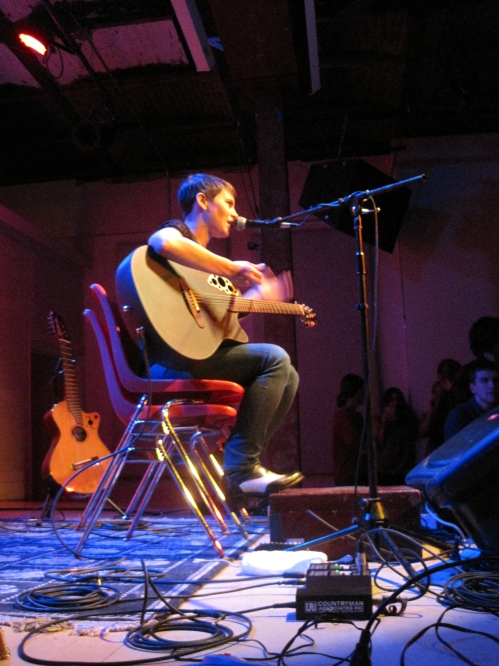 Kaki King is very petite. Check out her chair/s!

She played four guitar-only songs in a row. They were lovely, but I realized soon that I was bored. I am not a guitar solo girl. At rock shows, the wailing guitar solos are the things I wait through to get to the lyrics. If that is odd, I can live with it. I am a folk girl at heart. I love a good sing a long. Kaki King gave a shout out to her guitar tech and LLB. She played a lot of new songs from her new album, Glow. It would be impossible for me to tell them apart to tell you what she played, though. She said it was the first time she’s ever liked her music. I am really happy for her. I know a lot of people are on board, too, but it’s not for me—live anyhow. I think I’d find her album perfect for relaxing after a long day on the car ride home or as background while I grade students’ work during my prep period. 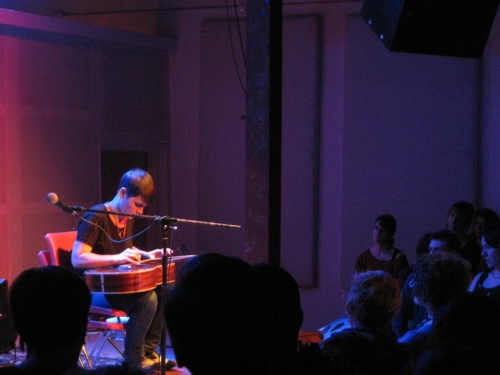 I liked “Cargo Cult.” She said she’d become interested in Cargo Cult (a religious practice of amassing material through magic and religious ritual says Wikipedia) which is the theme for 2013’s Burning Man. I Googled it. I am confused. I liked the song, though.

KK stomped for percussion, played a variety of beautiful guitars, and chatted a little with the audience. My notes from the show are essentially a count of how many instrumental songs in a row she played. I eventually got to eight. Kevin and Hedda left before then—they’re not night owls like me and they weren’t compelled either. I waited another song or two and decided I was just not into the music enough to stay. I can’t remember the last time I’ve left a show early. I think the only time I’ve ever done it was in Boston when I had to catch the T late at night or be stranded. The last of KK’s songs I heard was one that she wrote in a NYU dorm room. I clocked out at 10:23 and was pretty excited to think I’d be home by 11:15 after a show on a school night. I think you should always check out music for yourself and make up your own mind, but without lyrics, Kaki King’s songs felt more like lovely background music to me.