My friend Marian was/is a superstar and had her GPS programmed, parking permit for the Garden printed, and delicious eggplant and mozzarella sandwiches from Terra Cotta Pasta Co. in South Portland purchased and ready for Molly, Emily, and I before 5pm. We were committed to getting to the venue early enough to catch Ben Howard’s set at 7. We hit some traffic around the Garden, but made it to the garage and our seats just a song or two into his set. I sat separately (when tickets go on sale for big shows that I know will sell out, I just buy a single ticket so I get closer to the stage) and my seat was really good. It was in the club section, so had a great view (and I had just picked up my new glasses, too, so I could really see) and a private area with concierges. It was cushy. The negative was that there was a group of eight or so Quebecois twenty-somethings behind me hooting and hollering and having a loud conversation throughout Ben’s entire set. I was not happy.

British singer songwriter Ben Howard (you’ve definitely heard his popular song, “Only Love”) sounded great and was warm with the audience. His set was mellow, though, and with just him on acoustic guitar accompanied by cellist India Bourne, the sound just didn’t fill the room. I will certainly see him live sometime in a significantly smaller venue. I love his voice and his simple, but heartfelt songs. Check out his full set at Lowlands in Holland last August to get a fuller sense of his music. 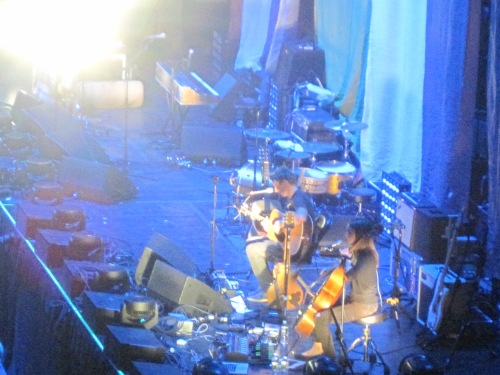 The Felice Brothers from upstate New York were less my thing and they were backlit, which made them incredibly hard for me to see, too. I’d seen Simone Felice open for Mumford & Sons last summer in Portland, Maine at their Gentlemen of the Road Stopover, and I didn’t connect with his music. With the full band, the sound was far more rockin’ than I’d expected. There was a bit of a Dropkick Murphys vibe mixed with some zydeco influence. I called it zydeco many songs before someone in the band actually pulled out a washboard to play. The second half of their short set was folkier, and I’m happy whenever an accordion comes out at a show. I liked “Take This Bread” and “Whiskey In My Whiskey.” I think they wrapped their set with “Her Eyes Dart ‘Round.” I loved the line “what keeps me alive is the green in your eyes.” I’ll see them open for Josh Ritter in May at the State Theatre in Portland, Maine and will be interested to see how that show in a smaller venue compares.

I think the Felice Brothers were there somewhere…

The set up for British folk rockers Mumford & Sons took a while. The crew set up a curtain all the way around the stage and the crew in the front of the stage had to hold it in place so it didn’t overtake the first few rows of lucky fans in general admission. I was super jealous when I saw my friend Chris take his spot in the very front with the other concert photographers. Check out his photos from the evening at BostonThroughMyEyes.com. 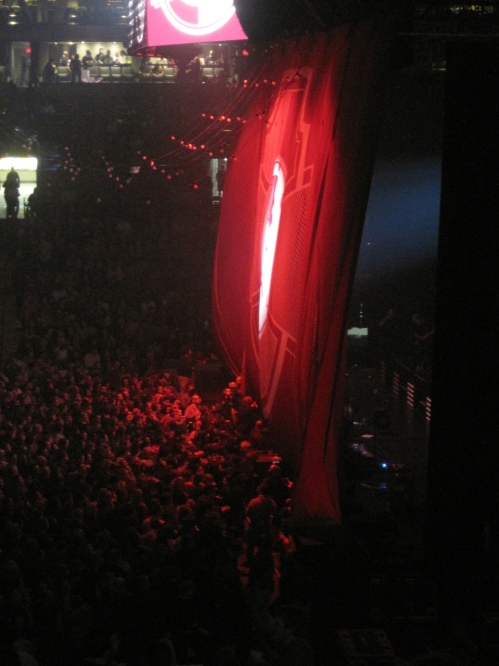 Photographers lining up in the front. Hey, Chris!

Marcus Mumford, Ben Lovett, Winston Marshall, and Ted Dwane put on a heck of a show. They know how to fill a room. They formed in 2007, released Sigh No More in 2009, and followed up with Babel in 2012. They just performed at the Grammys a few nights ago where they took home the award for Album of the Year. Hugely popular, I wasn’t surprised that the show sold out in minutes. Marcus told us that their first gig in America was at a church in Allston. It must have been at the International Community Church. Boy would I have liked to have seen them there. Marcus gave a shout out to the Middle East in Cambridge, too, where they also played a great show early in their career. 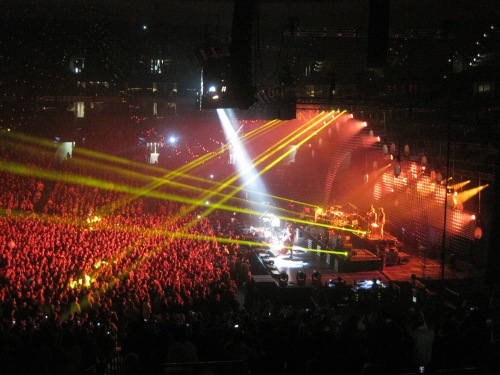 Here’s a picture of Mumford & Son’s set list from setlist.fm:

They basically played every song they’ve recorded for us. I especially liked “Below My Feet,” which is my favorite song on Babel, “Timshel,” with the refrain “you are not alone in this,” and “Lover Of The Light” with Marcus on drums. At times there were up to a dozen musicians on stage. They filled the Garden with glorious, upbeat, harmonic sound.

Marcus asked us if we’d been there to see Ben Howard. He said, “I just want to be him. He’s like Princess Diana back home.” I loved “Ghosts That We Knew.” The line “hold me still bury my heart next to yours” gave me chills. I appreciated the intensity of the song. Marcus was back on drums for their last song, “Dust Bowl Dance” off of Sigh No More. M&S completely rocked on that song and left us wanting more. 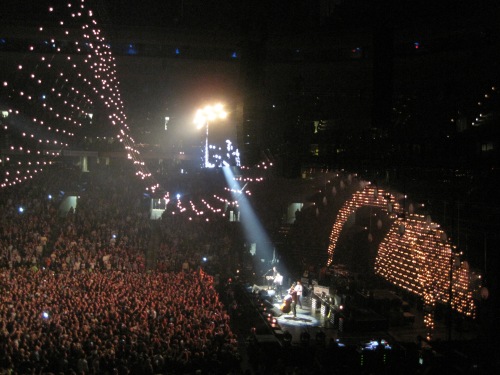 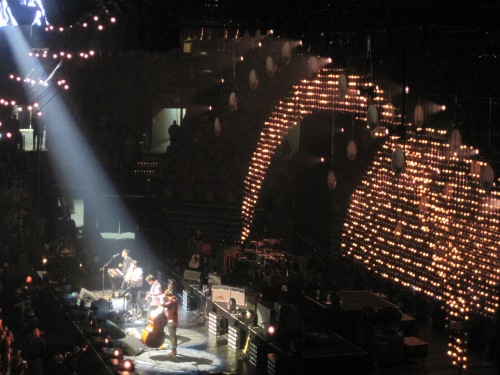 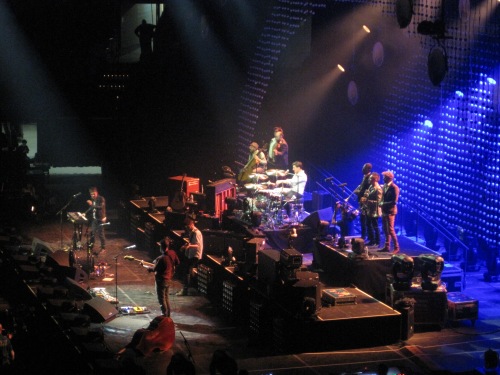 I saw a line of security clear a path from the stage to the back of the GA section. M&S wasn’t far behind. They ran back to a tiny stage to sing a couple of songs—one acoustic and the other a cappella. Chris took a video of “Sister” (a cappella) which is at the bottom of his M&S post. Marcus had asked the audience to be really quiet so they could hear, but a lot of people had had far too many beers by then. That leads me to this observation of the evening—if you are at a concert, why aren’t you LISTENING to the music? I don’t get it. Some people talked ALL NIGHT LONG. Yuck. Back at the Garden, M&S ran back to the main stage to rock out on “The Cave.” It was a great end to a rock solid show. 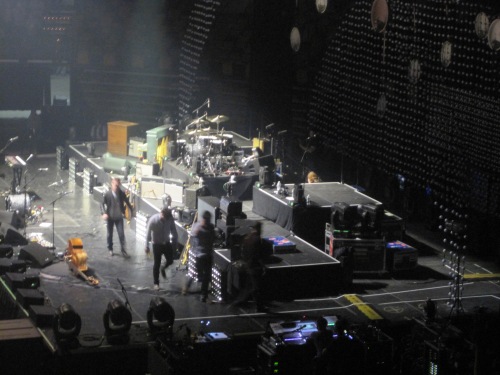 Heading to the back!

I met Marian, Molly, and Emily at the car and Marian ferried us back to Portland. We got pulled over for speeding and were let off with a friendly warning and a joke about how the Prius is only fuel efficient at certain speeds. I arrived back at Marian’s gorgeous home to three excited beagles. 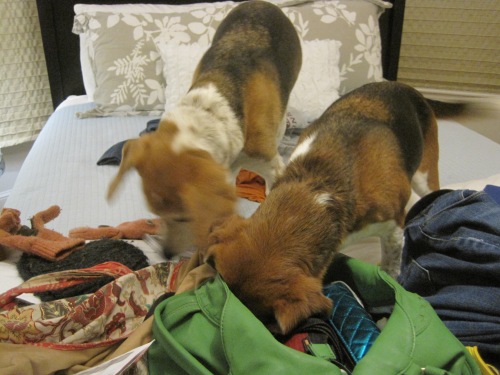 I got four hours of sleep and headed north to school after somehow flooding Marian’s bathroom (which dripped down two stories—awesome) using the bear claw tub/shower. I may never be welcome back at her house, but boy we had a good last night together!

2 responses to “Mumford & Sons, The Felice Brothers, and Ben Howard”