It’s too late to pretend that I’m impartial when it comes to Max Garcia Conover. He’s a great friend in real life and ardent supporter of this bloggity blog. Max hasn’t been playing guitar, singing, or writing songs for all that long, but he’s already built a fan base of people who appreciate his finger picked, intricate songs. Max is easily one of the most humble people I know and has absolutely no ego as far as his musical talent. I love that he’s earning well-deserved success and is still the same guy I’ve known for years. I don’t expect that will ever change.

Max’s new (and first) full-length album, Burrow, is lovely. I think it’s best appreciated by listening the whole way through. There’s great flow from start to finish. I love the instrumental opening that “Teem” offers, and “Evergreen Cemetery,” (which Max assured us is not about the duck that followed him on a long walk through it one day), “Burrow,” and “The Wedding Line” stick out as other favorites. I love hearing Sophie Nelson’s sweet voice on “New Beast,” too. Max told us that the whole album’s basically about the importance of inspiration.

Check out Sam Pfeifle’s review of Burrow in The Portland Phoenix, a write up in his hometown paper, a shout out in The Deli National, and listen to Max’s interview on Greetings from Area Code 207 (starting around minute 17). Here’s my post about Max’s first EP release show, another about his show with Morris and the East Coast, and a last one about his show with JAW GEMS.

I was really excited for Max’s CD release show at Mayo Street Arts. It’s a great venue for a MGC show because it’s so tiny and intimate. Every seat was filled and people also stood along the back wall when Max took the stage. Satronen Sound recorded the show, and Max wasn’t amplified. You could hear a pin drop. It was so quiet that I didn’t want to take too many pictures with my awesome new DSLR camera (thanks, Dad!) because the shutter was louder than the sound of the people in the room. I think that’s a pretty good sign that we were captivated. 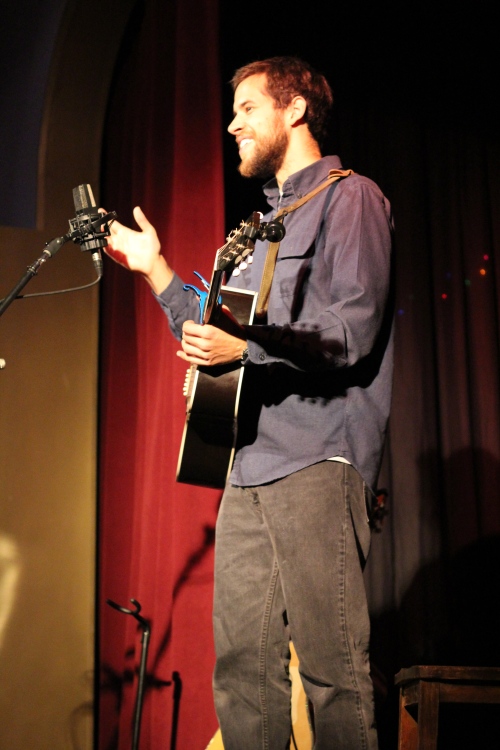 I’ll include a picture of Max’s set list for the evening. People who were at the show will perhaps (okay, surely) be surprised to find out that Max’s banter topics were pre-planned and written down on his set list. Max’s banter is hilarious, because it clearly makes him uncomfortable to talk about himself and his songs and his stories meander a bit. He gave whatbreesees.com a couple of nice shout outs at the show, which I appreciated. 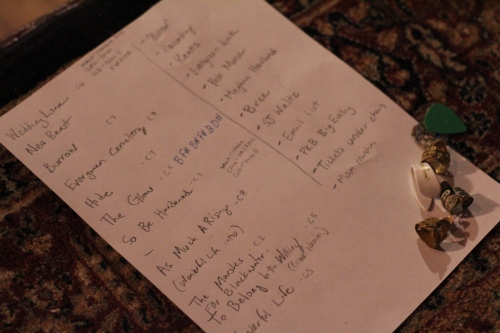 I liked Max’s new song, “So Be Hardened,” a lot. Max plays with the talented and percussive Samuel James from time to time, and “So Be Hardened” was Max’s attempt at writing a waltz (per James’ suggestion). After the intermission, Max opened with one of my favorites, “As Much a Rising Sun as a Setting One” and had us sing along with him. He taught us our part for his cover of “Wonderful Life” by The Felice Brothers and said we’d do it later so we’d have time to let the words percolate. He joked that we should sing it joyfully and also heartbrokenly. He taught it to us with hand motions, too. Max is a teacher by trade, and it showed. 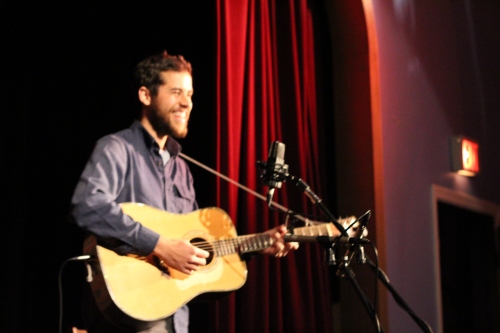 Max gave a shout out to his awesome mom who was at the show and had ironed his shirt for him. He said he was going to play her a song because she likes it, but that there’s another song she really likes that he wasn’t going to play. Soon after that he told us it was time to talk about the rest of our night. He said it’s always hard for him to play a show and have all of that adrenaline left over because everyone goes home afterwards and leaves him all alone. So we were instructed that we’d all walk out together and straight over to The Big Easy to see him open for The Pete Kilpatrick Band. A lot of us actually went. 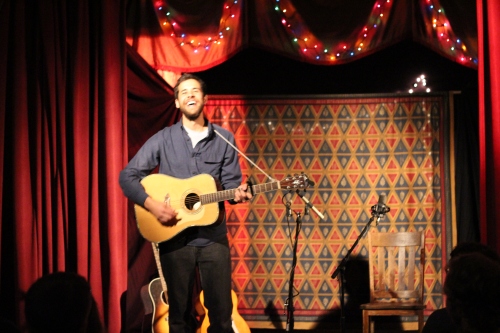 Max stepped off stage and walked to the small clearing in the back of the room to close the night with “Wonderful Life” with our help. It was great to sing together. We demanded an encore and Max took the stage to play “The Wide” for us. That song is amazing. Max’s hand percussion and tempo changes make it really outstanding. We gave him a standing ovation and he basically made time to hug a few people as he rushed out of the building to get to The Big Easy because he was already running late for his slot.

Thank you for coming!

I stayed to help clean up and then made it over to The Big Easy just as Max started his set. A lot of people from the Mayo Street show had gathered to enjoy another Max mini-set. Even though it’s also a bar, I think people were polite and listened pretty attentively. Max told a story about how he’d opened for Jim Avett (The Avett Brothers’ dad) at a festival in New York and covered “Murder In the City” for us.

Max at The Big Easy 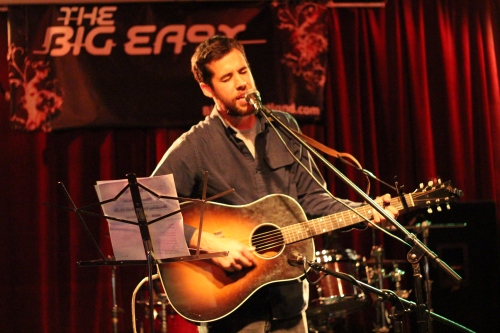 I was impressed by Portland’s Doubting Gravity. They were filling in for another band at the last minute and were great live. Their lead singer, Andi Fawcett, can sing all day long. She has a Melissa Etheridge/Janis Joplin voice with a lot of control and power. We all liked her and their rockin’ music—a stark contrast from Max, but also great.

The Pete Kilpatrick Band took the stage last. They’re a Portland favorite and the room started to fill up just as soon as they started their set. Here’s my post about the last Pete Kilpatrick Band show I saw. Pete told us about their recent show with John Popper of Blues Traveler and how they pranked their drummer on April Fools Day by listing his number on Craigslist and saying he was selling a house on 10 acres in West Falmouth for $100,000. His phone rang off the hook all day. PKB is always fun to see live. They know how to have a good time and their success is steadily growing. 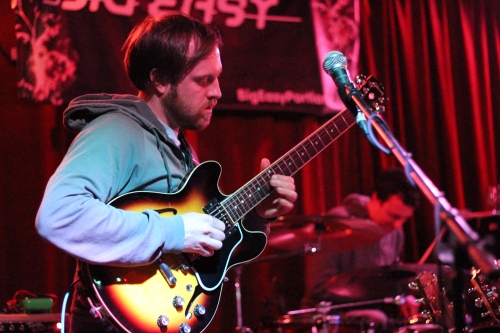 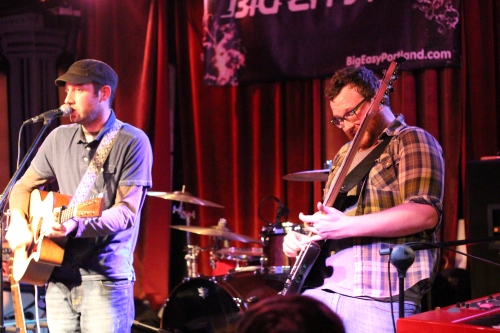 What a great night!