I had such a blast last night in the newly renovated space at Johnson Hall in Gardiner! My dear friend Andrea and I went out to dinner and the show to celebrate our one-year friendship anniversary! (Yes, I am a total sap). What a treat it was to see a show two minutes from my house! Johnson Hall is about to release a 24-show lineup for the upcoming year, and I am so excited about the caliber of music that’s on its way to teeny (and adorable) Gardiner, Maine. 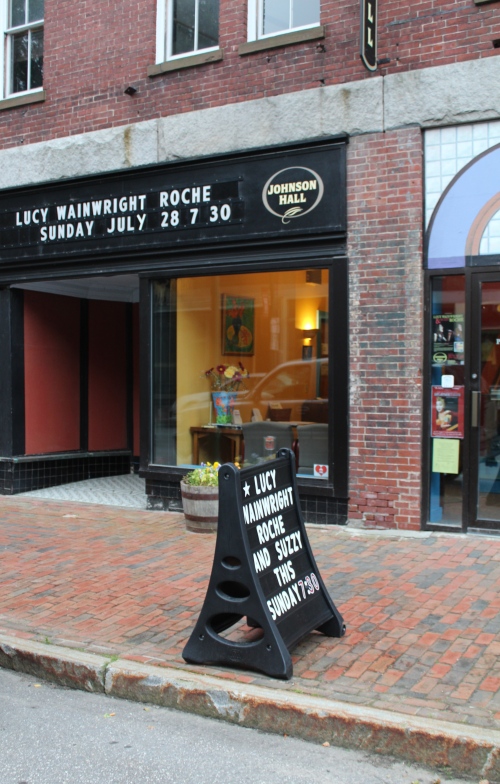 Gardiner community organizer extraordinaire and friend Meaghan Carlson saw online that Lucy Wainwright Roche was looking to play some house concerts to create buzz for her upcoming solo album to be released in October. Meaghan approached Johnson Hall to see if we could have a house concert in their newly renovated space and Director Mike Miclon readily agreed. It was a full house last night and the first time the stage has been used for a performance. I’d say it was a huge success.

Lucy kindly answered some questions I had for her via email the week before the show. I’d seen Lucy play three other times, and each time was fantastic. She is part comedian and part singer-songwriter. You can be sure you’ll have a good time at a Lucy Wainwright Roche show—she is charming and hilarious.

I was really excited to see Lucy play with her talented and quite well known mom, Suzzy Roche. They recently released an album together called Fairytale and Myth that they recorded with their friend Ron Morsberger who had been diagnosed with inoperable brain cancer. Suzzy spoke about how bittersweet it was to work with their talented friend during his last days. They played his song that appears on the album, “Everyone Wants To Be Loved.” 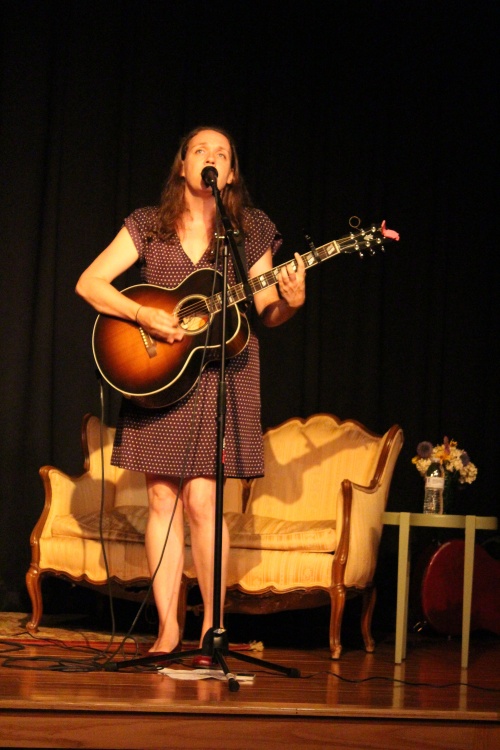 These are blurry, but I still love them. 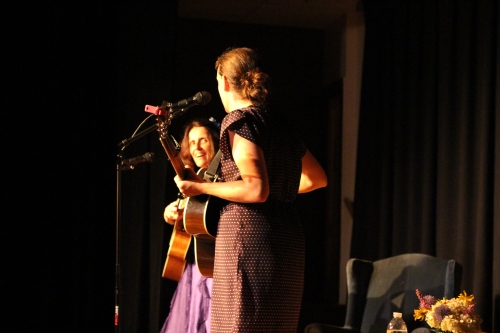 Lucy kept the audience engaged by asking us questions and asking if we had any questions or concerns. People in the audience obliged and we had a comfortable, entertaining exchange all night long. She and Suzzy asked us how the sound was, and Suzzy adorably worried that maybe her microphone was louder than Lucy’s. It was sweet to see the mother/daughter duo on stage. They told us about their journeys around Maine on their mini tour and how they slowly saw Maine while driving up Route 1. They got stuck in Wiscasset for a long time around Red’s Eats. After their show at The Strand in Rockland, they drove back by Red’s and got in line. Someone popped back in line in front of them to add an order of onion rings, and it turns out it was the last order. Bummer. Lucy might also have figured out for sure that she actually really doesn’t like lobster, but I won’t out her. Not all Mainers like lobster, either. More for me!

I was happy to hear “Chicago,” and it was nice to have Suzzy play on Lucy’s song. I appreciated their jokes about how they take rockin’ songs and turn them into sad snoozers. One example is Lucy’s cover of Robyn’s “Call Your Girlfriend” that’s on her new album. The two versions are incredibly different. My friends joke that I only like depressing music, so I’m on board with the sad snoozers!

Lucy asked us if we have songs that we hear so often that we learn to hate them. We said  (of course) yes, and she replied, “Well, we’re going to play one of them now.” Suzzy and Lucy covered “Hey, Soul Sister” by Train. I so preferred their version! Lucy asked if we’d be okay with her bringing her dog on stage. We emphatically supported the move, and Lucy brought her sweet black pup, Maeby, on stage. She totally stole the show. Maeby (of Arrested Development fame) climbed up on the couch and napped for most of the rest of their set. She’s clearly used to the sound of her mom playing music. 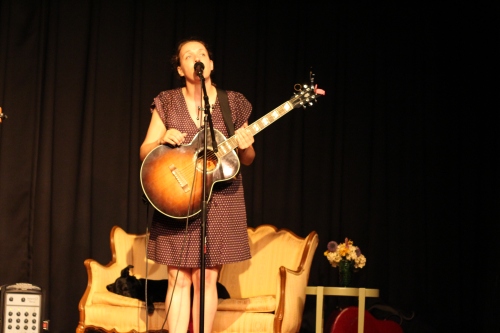 Never shy with an audience, Lucy told us about her dying car and asked if everyone in Maine had the same car for a reason. I said, “Subaru?” and she joked that she assumed it was the official car of the state of Maine. The majority of the crowd agreed a Subaru would be a reliable choice for her next car. She asked if any of us was selling one. I was a little surprised that no one was, actually! 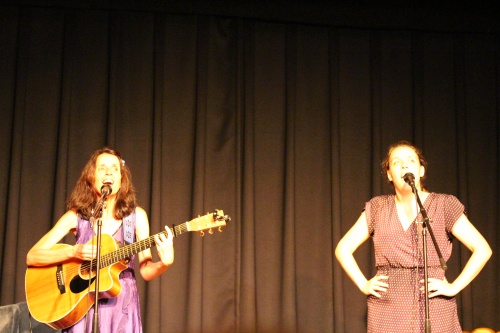 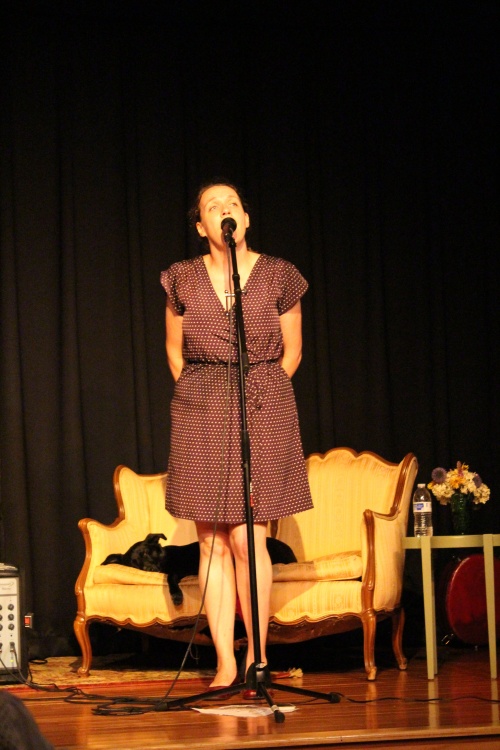 Suzzy and Lucy started to wrap up the show with “America” and then Suzzy joked that if they sold enough CDs than she wouldn’t have to sleep in the car because Lucy likes to have her own hotel room and they can’t always afford two—but “NO PRESSSURE.” I can see where Lucy gets her sense of humor. It was very endearing. Lucy told us that they wouldn’t be playing an encore because “it’s too much pressure,” so we should just imagine that they’d left the stage and this song was their encore. They finished with “When a Heart Breaks Down.” We offered a standing ovation and Lucy and Suzzy stayed to talk to everyone who wanted to say hello after the show. I chatted a little less because I was smitten with Maeby and spent my time doting on her. She’s such a cutie. 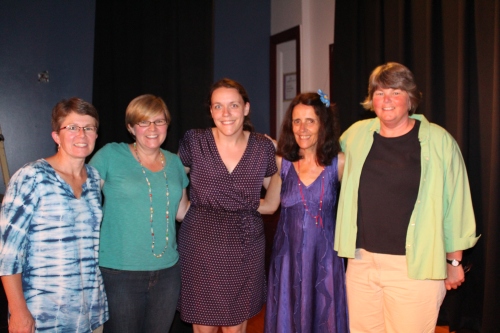 The Marron sisters with Lucy and Suzzy 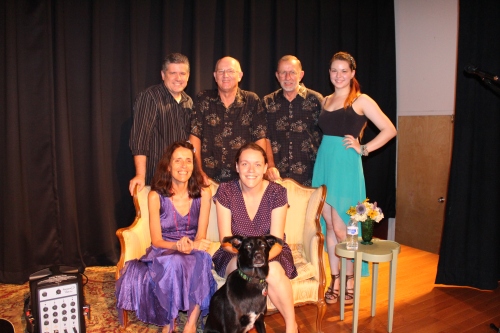 With Meaghan, who had the idea to throw this special house concert!

Thanks for coming, Lucy and Suzzy! What a lovely night!