My Bowdoin College classmates Harriet and Atlee moved back to Maine last year and bought a beautiful old home on the Cathance River in Bowdoinham. It’s been wonderful to have them back in the area. Harriet knew I was getting a new furnace over this weekend and wouldn’t have heat or hot water at home, so she invited me to join them for a potluck and house concert in Bowdoinham and to spend the night afterwards. I had no idea what a treat I was in for! My dear (and very busy) friend Megan lives just down the road from Harriet and Atlee, and I was excited when Harriet told me that she was going to come over before the show and then join us for the house concert.

I feel like the Bowdoinham house concert series at this fabulous family’s home is pretty much at capacity already, so I’ll wait to hear from their organizer before I put more specific information about them here. It seems that the shows started organically about six years ago and have been going on ever since. There’s a delicious potluck before the concert and then everyone goes upstairs to a beautiful room with great acoustics and cozies up for an unplugged show by musicians from far and wide. Attendees are asked to leave a minimum $10 tip for the musicians, and everyone mingles and gets to know their neighbors and has a great time. I got on the email list after the show and can’t wait to go again. It was lovely.

I had no expectations at all about Michigan’s Red Tail Ring, but they were really wonderful. The thing that’s most important to me about concerts is feeling like there’s a connection between the performers and the audience, and I like to be right up front to be able to see artists’ facial expressions and to hear stories about their lives and songs. That’s the best kind of night. And here we were—in someone’s lovely living room—surrounded by people who had come out strictly to listen and enjoy the music of people who’d come to share stories with us. It was a real treat. 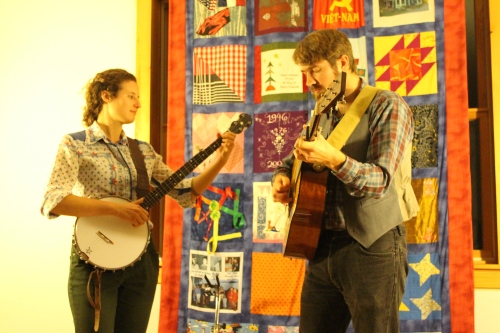 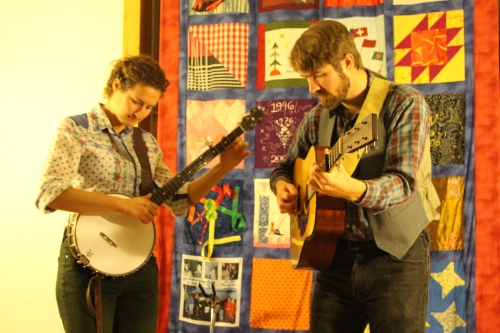 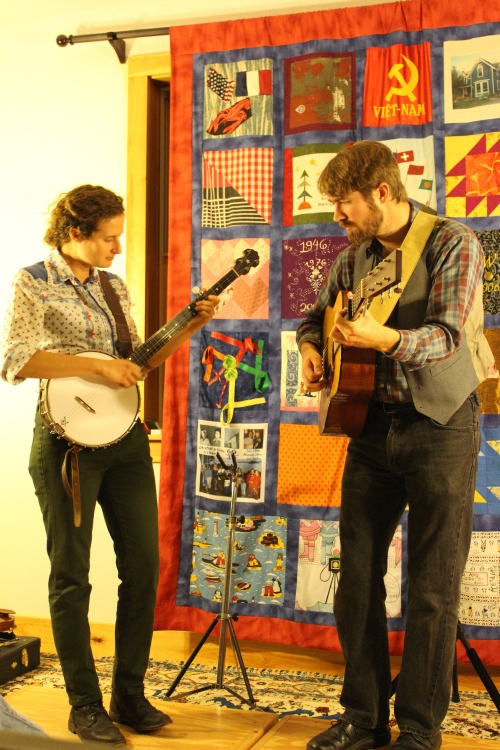 Red Tail Ring duo Laurel Premo and Michael Beauchamp were warm and charming. If I hadn’t actually been in someone’s living room, I would have said that it felt like we were in their living room anyhow. They played traditional folk songs on guitar, banjo, mandolin, and fiddle and sang beautiful harmonies, too. I think we were all pretty taken with them right from the start. “Katy Came Breezing” from Red Tail Ring’s most recent album, The Heart’s Swift Foot, completely stole my heart. Red Tail Ring has previously released two other albums—their interpretation of public domain songs called Mountain Shout and their original songs on Middlewest Chant. 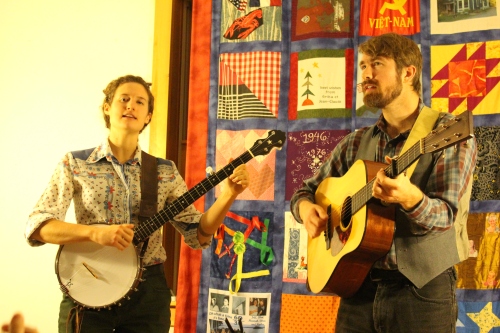 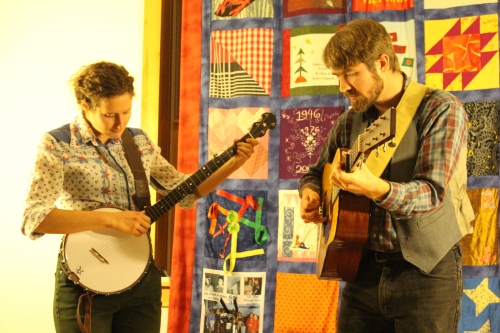 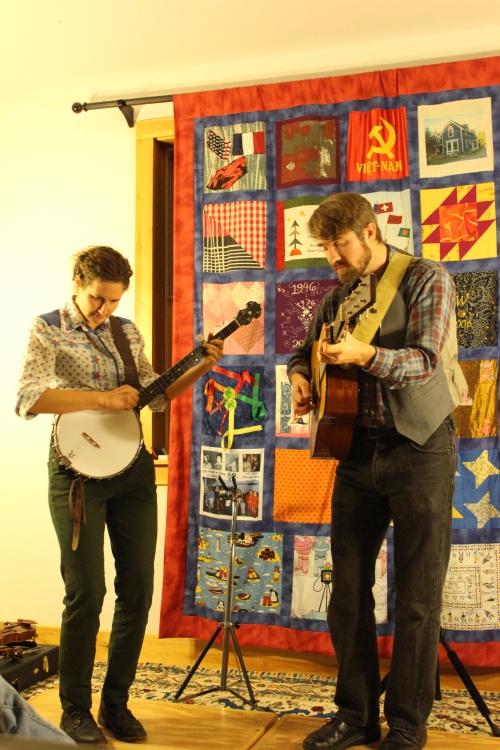 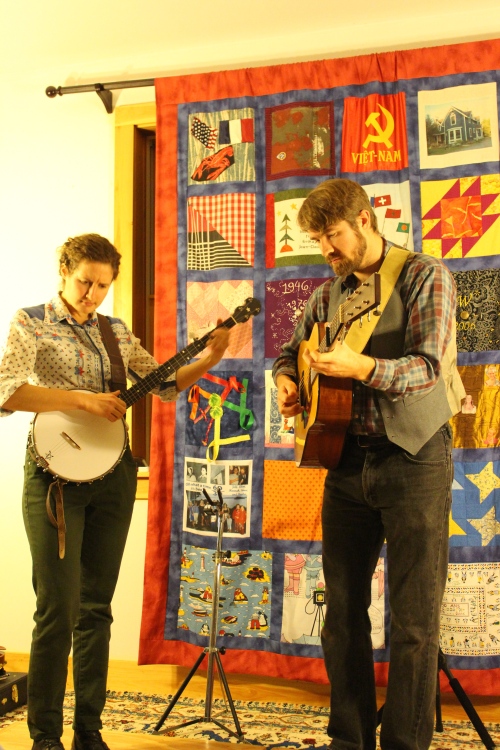 I love it when artists talk about their lives and their music—context is the best. Red Tail Ring did just that. Michael told us that they have a regular gig playing a square dance back in Michigan. Their song “Dirt Triangle” is about their dream to build a dance hall where the Burger King used to be. Walgreens got the lease, though. They told us that “Eliza” is the story of a delusional man who keeps asking women to run away with him. I also really loved “A Clearing in the Wild,” which Laurel told us was about finding a calm place in the wild of our minds. Before intermission, Michael and Laurel gave a shout out to their friend and Maine musician Putnam Smith for connecting them with the Bowdoinham house concert hosts. 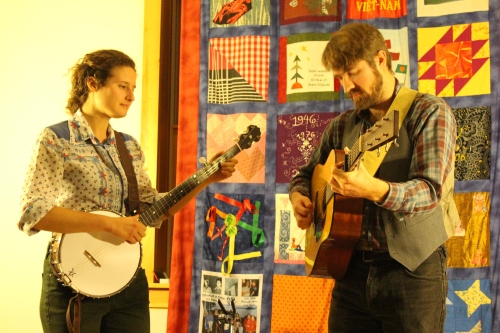 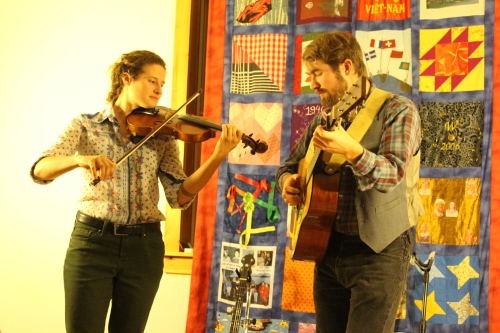 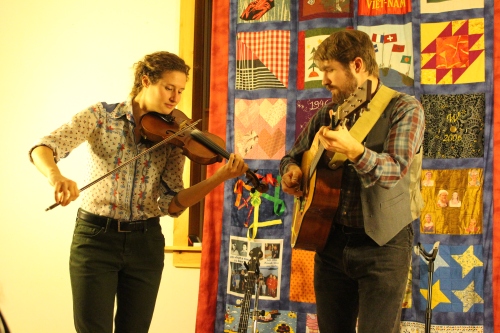 After intermission, Laurel and Michael played a cover of a song by their friends Lindsay Lou & the Flatbellys and it was at that point in the night when they gave so many music recommendations that they joked they were creating a Pandora station for us (I’d listen!). Michael talked about their neighbor and mentor Joel Mabus who lives just down the road from them in Kalamazoo. Laurel played her jaw harp for us, which was really neat, and they closed with a lovely cover of Hazel Dickens’ beautiful song “My Heart’s Own Love.” 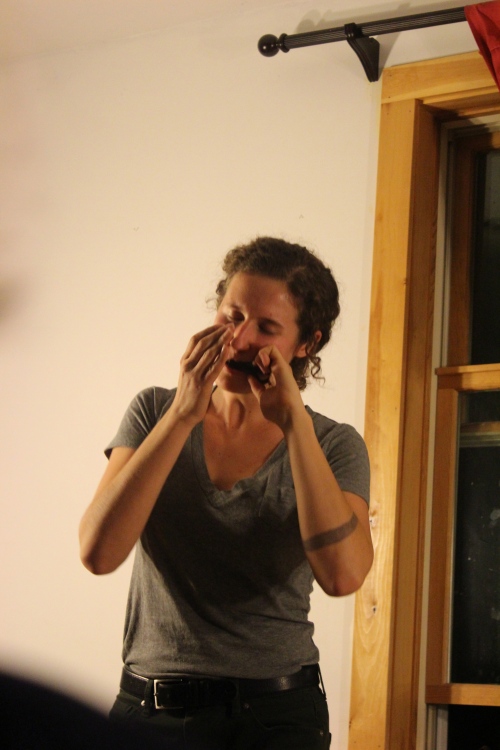 Laurel on the jaw harp 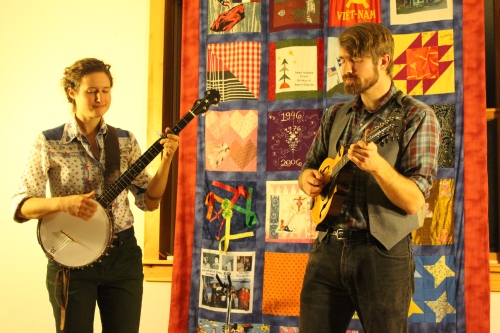 We were clearly smitten with Red Tail Ring and asked for an encore. Someone in the audience suggested they play “Pretty Polly.” Michael and Laurel kindly obliged, and joked that the song is really a warning against dating online. They were such a pleasure to see live. If you’re a fan of traditional music, definitely check them out. If you have the chance to see them live, whether or not you’re generally a fan of traditional folk music, you’ll want to go. I promise.

Thanks so much to our fabulous hosts for opening up their home and to Michael and Laurel for a wonderful evening! Harriet and Atlee—thanks for inviting me to join you and for putting me up for the night! 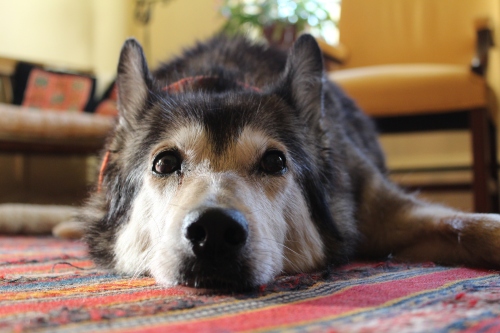 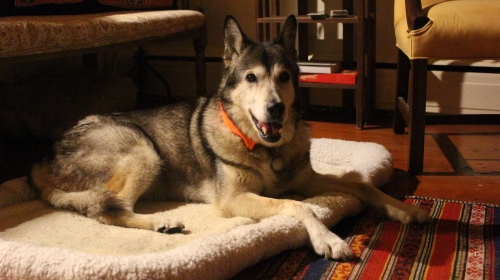 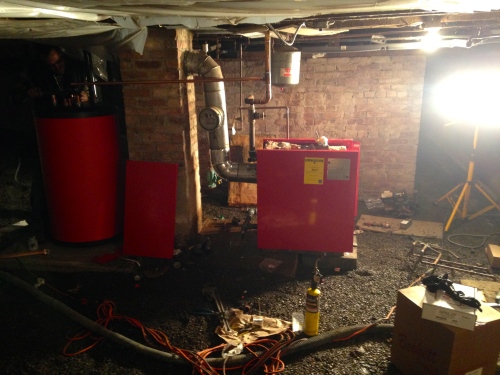 Welcome to my world, new furnace!