This was the kind of grey and dreary Tuesday that felt like it should have been a Thursday already. I was so ready for Daylight Savings Time, and I think the dark weather sadly ended up clouding my show experience. I had a sluggish afternoon after school holding my dear friend’s two-month-old baby girl for a few hours before heading down to Portland to catch this show. I got to Sarah’s house just as Eric Hutchinson and Tristan Prettyman’s Studio Z interview on 98.9 WCLZ began and listened while I snuggled baby Isabelle. I’d seen Eric live back in 2012 on his “Almost Solo Tour” with accompanist Elliott Blaufuss, and he was a supreme entertainer—as much a stand up comedian as a singer-songwriter. I was happy to hear that he was just as engaging over the radio, joking that the way he and Tristan co-headlined this tour was by each playing their set simultaneously on opposite sides of a curtain and seeing who gets more attention from the crowd. Tristan and Eric talked about being good friends for over a decade and how excited they were to put the City & Sand Tour together (she’s from San Diego and he’s living in NYC). Tristan talked about going through a lot of transitions—being dropped by her label, firing her manager, becoming a one-woman operation, and getting married in August right before spending two weeks in the studio after her honeymoon recording her new EP, Back To Home. They sounded like they were already having fun together on the road (the tour just started the night before in Boston), and they played a fun cover of “All About That Bass” together that got me geared up for the show.

Isabelle is quite snuggly 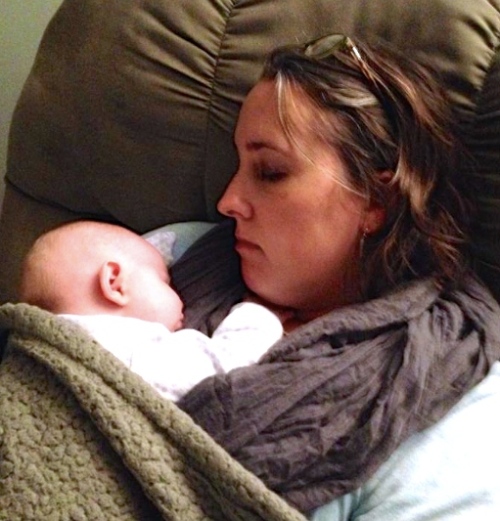 She’s so snuggly that we fell asleep together for a little while before I took off for the show.

I arrived early to grab my press ticket and a front row spot. My friends Andrea and Cory were already at Port City Music Hall by the time I arrived, but sadly couldn’t stand up front with me because Cory was injured and needed to sit for the show. For whatever reason, being solo at this show made it less fun. I ended up in a pocket of obnoxious people—drunk people, loud talkers, adults waaaaay too old to be grinding on each other like that, and between that and the dreary weather, I think my positive show experience was over before it began. Most of those annoying people arrived only after Britain’s Nick Howard performed, so I did get an uninterrupted chance to enjoy at least part of the show. Nick was engaging—as far as an opening act goes, he did everything right. He chatted comfortably with the crowd, complimented the area (he joked about being able to see why so many presidents vacation in Maine), sang a few songs we knew (his cover song medley included “Wake Me Up” and “Save Tonight”), asked us to clap, whistle, and sing along, and didn’t play for too long. Well done, Nick. I especially liked his original songs “Can’t Break a Broken Heart” and “Falling for You.” 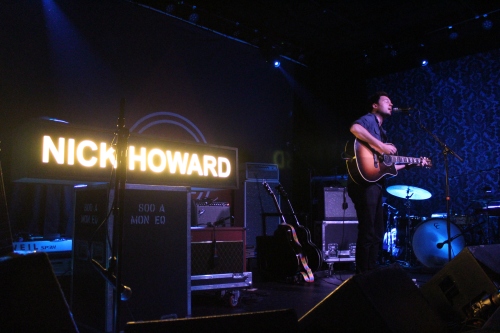 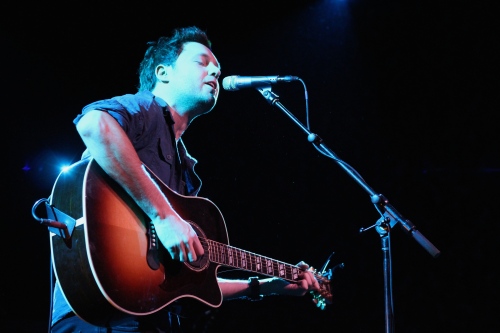 I was impressed with the speedy set change (it being a school night and all), and Tristan Prettyman and her band took the stage in no time at all. I hadn’t seen her since 2011 at the Life is Good Festival in Canton, Massachusetts, and was glad to see her again. Her last album, Cedar + Gold, got a lot of play on long road trips in my car in 2012. It’s definitely a breakup album (this summer, my break up album was Sam Smith’s In the Lonely Hour) and was written about her broken engagement with Jason Mraz. Here’s Tristan performing a stripped-down version of “I Was Gonna Marry You” that she didn’t play at the show, since a lot has happened since then. Tristan told us she’d gotten married in August (her husband, Google Venture managing partner, Bill Maris, was in the crowd proudly taking photos). Her new EP, Back to Home, released the day before the show, is a much happier album, and Tristan told us she was playing these songs live for the first time on the City & Sand Tour with Eric. She joked about how all of her songs are about stupid men, and so she really didn’t have anything appropriate to play when she visited her friend’s sixth grade classroom, so she wrote a “namaste” song, “Open Up Your Eyes.” I was glad to hear “Say Anything,” “Madly,” and “My Oh My,” all songs that 98.9 WCLZ has played regularly for ages. Tristan surprised us with a fun cover of Iggy Azalea’s “Fancy” during her set, which had people happily singing along. 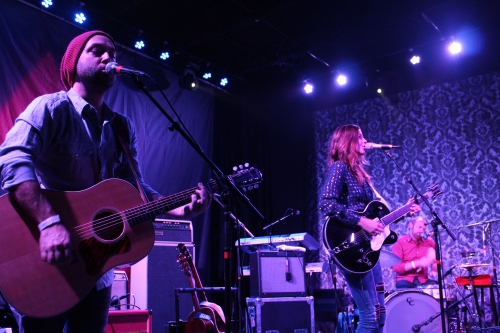 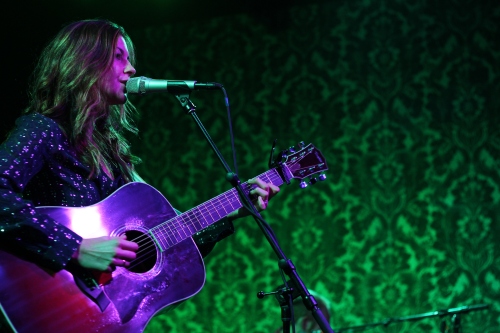 The last time I saw Eric Hutchinson was a real treat. He told a ton of stories about his songs and interacted comfortably with the friendly crowd while playing stripped-down, acoustic songs—my ideal concert-going scenario. This show was different. Eric hopped up on stage with a full band and rocked from start to finish. He didn’t say a whole lot to the crowd, but he and his happy bandmates had great energy and put on a fun show. Eric has a lot of hits from his decade-plus-long career, and he played them all. The crowd was clearly excited to hear “Watching You Watch Him.” During “The Basement” he sampled a little Aretha, Michael Jackson, Stevie Wonder, and Amy Winehouse. It was a big hit with the crowd and Eric and the band really went all out on it. 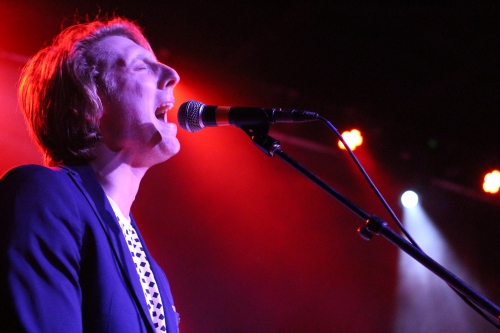 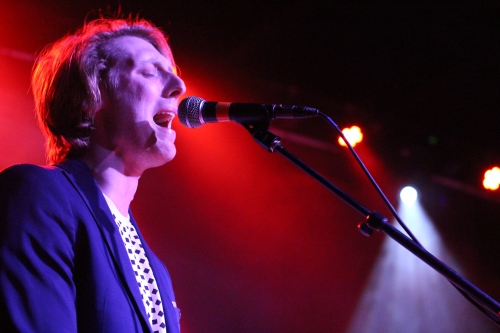 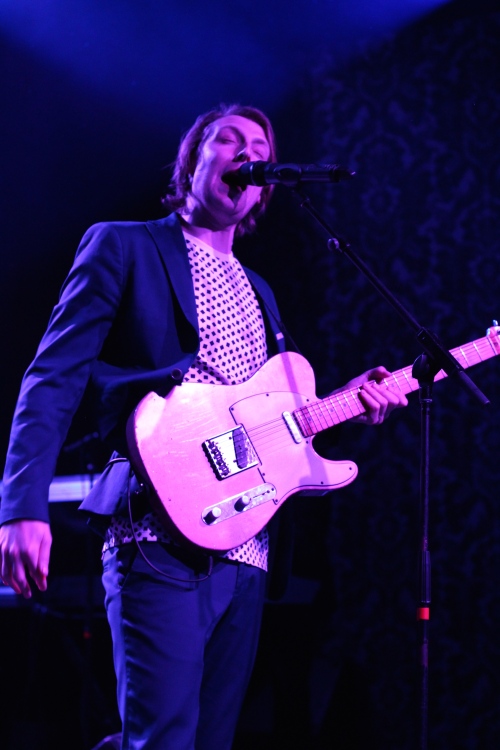 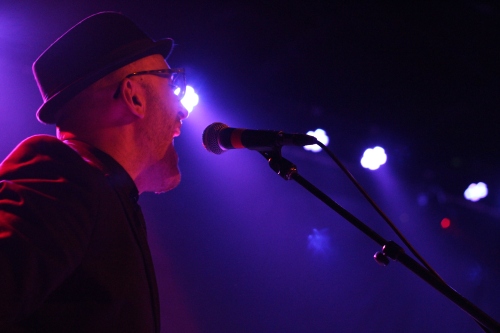 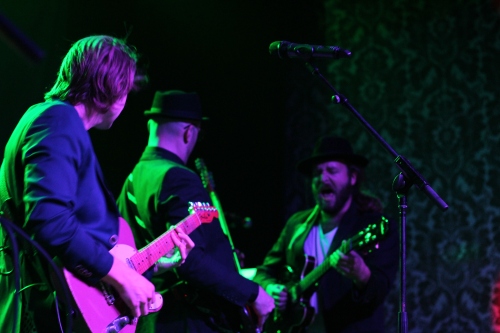 Look at the fun they’re having!

Eric called Tristan up on stage and they did one of her songs, “Love Love Love,” together. He told us that the first time he heard that song, he listened to it on repeat for an entire two hour drive. Eric tested out the security of the big speaker on the floor right next to me and then hopped up onto it to start singing “OK, It’s Alright with Me.” I physically had to move to get out of his way. That’s how close to a performer I want to be during a show! (It’s also why I didn’t move to a new spot when I probably should have to get away from the folks I was standing around. Lesson learned.) 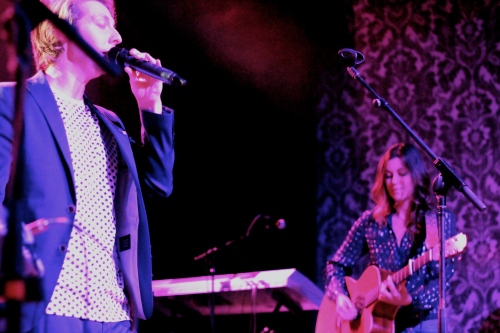 Tristan and Eric on her “Love Love Love”

Eric up on the speaker right next to me. This is the kind of stage proximity I look for! 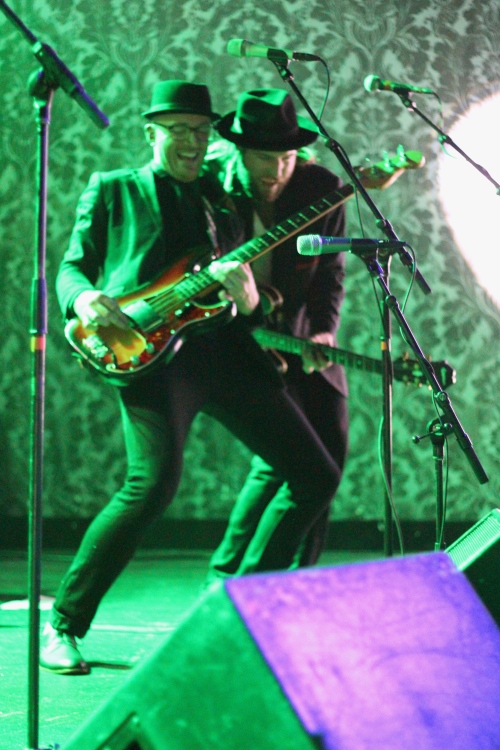 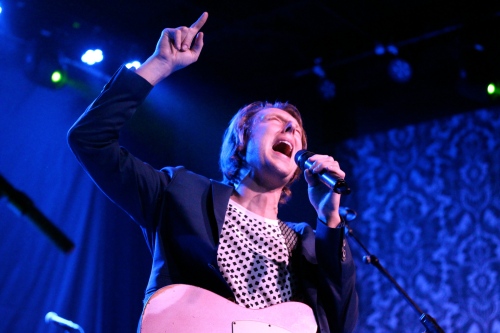 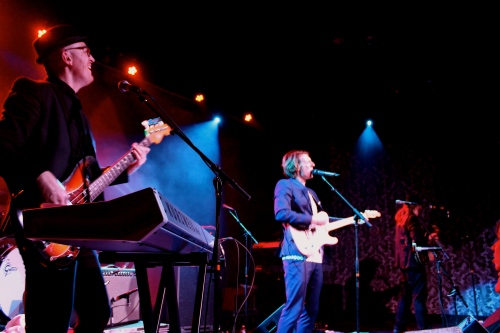 I appreciated the way that Eric gleefully interacted with his band on stage. He took the time to introduce all of them and to give them time to highlight their skills, which they especially did during “You Don’t Have to Believe Me.” The show is clearly not all about him to him, and that’s great to see. Eric talked about getting dropped from his label years ago and using the money to make his 2008 album, Sounds Like This. His newest album, Pure Fiction, came out in April of 2014. Eric sampled Taylor Swift’s “Shake It Off” and OutKast’s “Hey Ya!” during “A Little More,” one of his newer songs. I stayed through “Rock and Roll” and then decided to head home before the encore so I could be in bed before midnight on a school night. Eric’s so fun live. Next time I see him, I’ll try harder to bring my dancing shoes!