Carbon Leaf with The Accidentals

It’s always a pleasure to see Virginia’s Carbon Leaf live. I’ve been going to their shows in Maine since 2009, and they always bring positive energy and upbeat music. Lead singer Barry Privett told us that he’d done the math, and they’ve played Portland, Maine ten times. I left my fancy camera at home so I could dance, but here are posts from Carbon Leaf shows at Port City Music Hall in December of 2013 and November of 2014 that have longer recaps and far better pictures of the show.

I love Carbon Leaf shows because the crowd is always full of great people who sing along and have a great time. Being part of a great crowd means having a great time at the show, so this is truly an important point to mention. I met a couple who had driven up from Massachusetts for the show, and we danced and sang along from the front row while Carbon Leaf played a solid 20-song set, including songs you’ve definitely heard on 98.9 WCLZ, such as “Life Less Ordinary” and “What About Everything?” “The Boxer” takes on new meaning for me now that I’m training five days a week at a MMA gym. In fact, I met my teammates at our coach’s house after the show to watch the UFC fights until the wee hours.

The Accidentals. They had a lot of energy!

Carbon Leaf’s guitarist, Carter Gravatt, joined The Accidentals on stage for a song

“Let Your Troubles Roll By” is the Carbon Leaf song that means the most to me and inspires me to lift my head when things are hard. I always think of my friend Sarah, who I met at a Carbon Leaf show at Port City in 2009 and who suffered an aneurysm, but has really come a long way in her recovery. Carbon Leaf even sent her a get well soon card when she was in the hospital. They’re great musicians, but good people, too. That stuff matters to me. 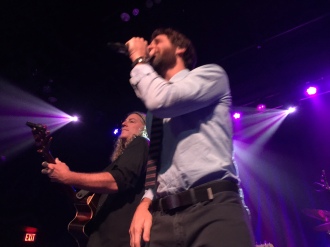 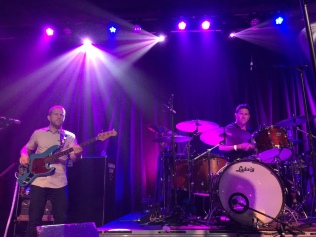 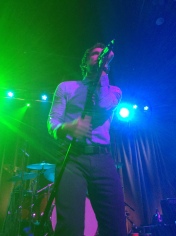 Towards the end of the night, Barry asked to turn the house lights up. Since Veteran’s Day was the day before, Barry asked all of the veterans in the room to raise their hand for much deserved recognition and then dedicated and played “The War Was in Color” for them. It was a moving moment. I’m always glad to see you when you’re in town, Carbon Leaf! See you next fall!

Tagged as 98.9 WCLZ, Barry Privett, Carbon Leaf, Let Your Troubles Roll By, Life Less Ordinary, Port City Music Hall, Portland Maine, The Boxer, The War Was in Color, What About Everything