For many years, I spent Memorial Day weekend with my best friend in NYC. She’s moved to the suburbs in New Jersey and has a family now, so our annual MDW tradition has ended. This year, I looked forward to some downtime at home instead of a big weekend away. I went to Bowdoin’s Commencement and marched in the alumni parade, visited the farmers’ market, and ventured down to Portland to meet up with Bob for an early dinner at Empire. He insisted we meet at 5:30 for dinner, because he was confident there would be a line at Port City Music Hall for the Buffalo Tom show and wanted to be there by 7–when doors opened. I told him his worries were unnecessary, but there was a short line of fans outside when we arrived at 6:50. Bob loved it. We were front and center for a solid 40 minutes before really anyone else arrived for the show, though (Bob won the battle, but I won the war on our bet).

Bob vouched for Buffalo Tom, has seen them a lot live, and promised they’d be “smart and funny” in person, so I decided to join him for the show. Probably like many other women in their 30s, Buffalo Tom came onto my radar back in 1994, when I was a freshman in high school and watched My So-Called Life religiously. There’s an entire episode that revolves around Angela and Rayanne acquiring fake IDs to sneak into a club to see Buffalo Tom play because Angela’s love interest, Jordan Catalano, was going to be there. Buffalo Tom performed in the club in the episode, and surely expanded their listening audience to include lots more teenage girls than just me. I bought Buffalo Tom’s 1993 album, Big Red Letter Day, after the episode aired, and listened to “Late At Night” on repeat.

Buffalo Tom formed in 1986 when guitarist Bill Janovitz, bassist Chris Colburn, and drummer Tom Maginnis attended U Mass Amherst, and they are currently touring to celebrate the 25th anniversary of their 1992 album, Let Me Come Over. They don’t have an opening act, play a full set of a mix of their songs, and then play the entire album after an intermission. Since I’ve never heard that album and didn’t fall in love with them live, I didn’t feel bad about leaving after the first set.

They played all of my favorites from Big Red Letter Day–“Late At Night,” “Sodajerk,” “I’m Allowed,” and “Tree House” right at the beginning of their first set. I was happy to hear these songs that reminded me of a formative time in my life in person from the front row. Bill Janovitz chatted with the crowd a bit, mostly to make fun of his own age and say how their fans must already be tired like them from all the standing, but he also had some adorable rock guitar antics. They played an impressive total of 27 songs that night, including a quick bit of “Whipping Post” by the Allman Brothers as a tribute to Greg Allman, who’d passed away earlier in the day.

I’m a little behind in blogging because my last remaining elderly kitty (sweet Yeltsin) passed away recently, but Bob texted me this today, fully knowing that I didn’t love Buffalo Tom live: 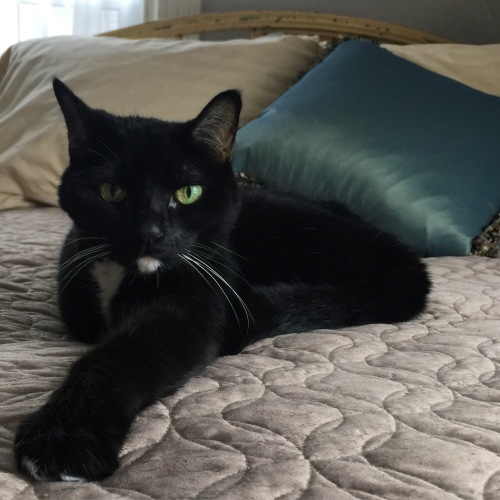 “Buffalo Tom is playing Royale on September 10! I’ll pick you up at NOON. There will be a line!”