*I wrote this entire super belated entry two nights ago whilst parked in a field somewhere in Newport, Rhode Island trying to get out of the Newport Folk Festival in the pouring rain. I didn’t move for almost two hours! Many thanks to my friend Bobby Guerette (Bowdoin ‘07) who shared his shots of the Racer-X show with me. My pictures were sadly lost when my memory card crashed. Thanks, Bobby!*

My records indicate that this was my sixteenth Racer-X show, but there may have been more that I forgot to record. I am (obviously) a super fan. Vin Shende, Bowdoin College music professor, was my neighbor when he and his wife first moved to Brunswick. I reread this article from The Bowdoin Orient and was reminded that Vin answered an ad in the paper when he auditioned for a band that bassist Pat Cyr and drummer Dave Morrill were trying to start. Vin’s Bowdoin colleague and friend, English professor Aaron Kitch, also auditioned, and Racer-X was born—Maine’s BEST 80s cover band. I’ve seen others, and none put on the show that Racer-X does. Check out some great Racer-X moments here. They have musical talent AND showmanship (something I’d argue some of the other 80s bands are lacking). 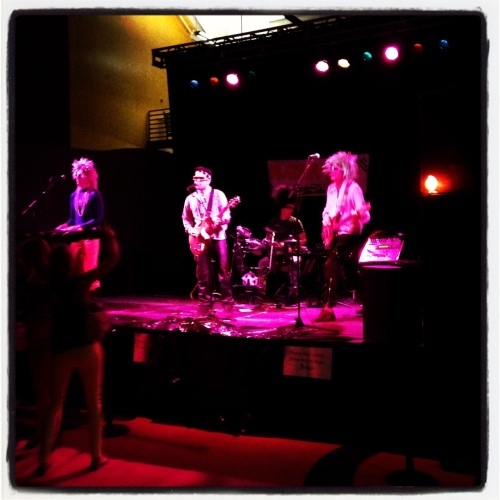 Bowdoin College very wisely hires Racer-X to play every year at Homecoming in the fall and Reunion Weekend in early June. I had already graduated by the time Racer-X came into existence, but Bowdoin has this way of making you feel welcome when you come back—even if it’s not your reunion year. A lot of my local friends are alumni, though, so we decided to combine our dear friend Courtney’s birthday celebration with a bit of Racer-X. It was a perfect idea. I think we had an entourage of close to fourteen people—half alumni and half not, but we decided we had enough polar bears in our midst to make it okay to hit up the show. Were any of us technically having our reunion? No. We have reunions every five years at Bowdoin, and Courtney (’06), her sister Kate (’11), and I (’01) all had ours last year.

Racer-X’s show started late into our day of celebration, so I forgot my concert notebook and took notes on the “Notes” app on my iPhone. You can see by the photo that perhaps I wasn’t in the best shape to be taking notes, but I’m willing to blame it on auto correct if any of my students, my baby sister, or my dad is reading this. 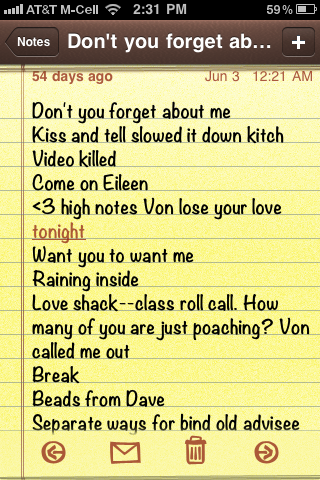 My notes from the evening. First shot.

Racer-X played all the usual crowd favorites—Simple Minds’ “Don’t You (Forget About Me),” “Video Killed the Radio Star,” and “Come on Eileen.” Aaron Kitch slowed it down on keys for “Wishing Well,” and lead singer and guitarist Vineet Shende BEAUTIFULLY hit some killer high notes on “Your Love.” They did Cheap Tricks’ “I Want You To Want Me” and did a class roll call during the ever-popular “Love Shack.” I’ve been invited up on stage to do the “tin roof—rusted” part before—it made my life complete. At the end of the roll call—you get the idea—cheer if you’re from the class of 1967, 1982, 1997, 2002, 2007, etc. (and trust me, people were there representing all of those classes!)—Vin asked the crowd “How many of you are just poaching reunion?” He found me in the front of the crowd and shouted out my name in celebration of my devotedness (is that a word, Kitch?) to the band. The best part about my shout out is that one of my classmates was also there poaching, and he came and found me and we got to catch up and dance for a bit. I love Bowdoin. 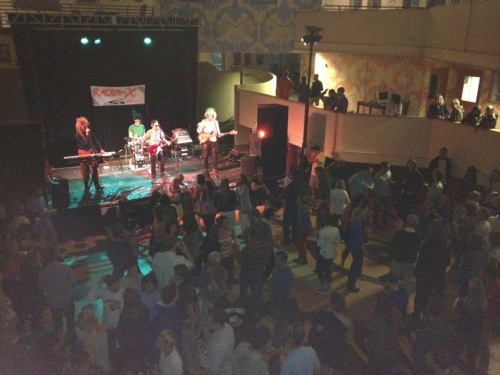 Racer-X’s talented drummer Dave (who plays an electric drum set at gigs) came to find me at the end of the break to give me some beads to wear—I was touched and always appreciate the special treatment of super fans such as myself!

I can’t exactly decipher the notes I took next on my phone, but I think it says that Vin dedicated “Separate Ways” to one of his old advisees who was in attendance. They played my favorite—Night Ranger’s “Sister Christian,” that they very sweetly dedicated to me last year at my tenth reunion in honor of me graduating from Bangor Theological Studies that May.  I totally freaked out (as I always do) when they played “Sunday Bloody Sunday.” My notes indicate that, too, as it reads—“SINFAY BLOODY SINDAY.” You get the idea. They often dedicate that song to U2/Racer-X super fan Kim Pacelli. The whole crowd jumps and down the entire song—guaranteed. 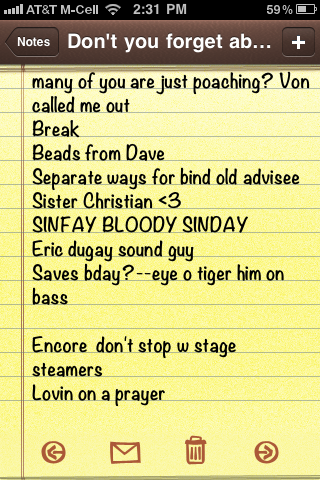 My notes from the evening. Second shot.

The band gave a shout out to their devoted and talented sound engineer, Eric Dugay, who is probably a relative of mine based on the name alone. The next shout out was for drummer Dave because it was his birthday! Happy Birthday, Dave! He switched from drums to bass for “Eye of the Tiger.” My notes read: “Saves bday?—eye o tiger him on bass,” so that’s pretty clear, I think.

I always bank on Journey and either Guns N’ Roses or Bon Jovi for the encore. And since Racer-X is awesome and such fun, we always want an encore. My notes indicate that the encore was “don’t stop w stage streamers.” Hmm…it must have been “Don’t Stop Believin’” with people from the audience rushing the stage to sing along. I’m still waiting for my invitation to sing that song with them officially since Aaron Kitch and I did a glorious duet of it at Sea Dog karaoke night. We killed it. I was once invited to sing “Like a Virgin” with them at a gig and quickly realized that I really only know the first verse and the chorus. Thank goodness Kim was there in the front to feed me the lyrics. That’s probably why my invitation for “Don’t Stop Believin’” hasn’t come in the mail yet! But I promise I know all of the words to it and am always ready, guys!

Racer-X ended the glorious night with “Livin’ on a Prayer.” I can say with certainty that the prayer the crowd wants answered in that last moment of a Racer-X show is that the night won’t end. Racer-X is a blast. They are about to go on a bit of a hiatus while one of their members is in California for the year (unless they plan to have a temporary replacement?), but they’ll be back in full force next summer and if you can see them live, definitely do not miss it!

PS—A shout out to the Bowdoin reunion ambassadors who drove all of us home to Courtney’s house which is Bowdoin-adjacent in covered golf carts after the show ended. Bowdoin knows how to treat alumni well! Thanks!