*I took a deliberate concert break for the entire month of November. I always want to make sure that I see shows because I want to and not because I feel that I have to. I am back in the swing of seeing live music, and recently started piecing together my concert calendar through May 2013. I deliberately won’t be seeing 52 shows this year (although it will be close), and I’m glad for that.*

I watched The Civil Wars on Austin City Limits recently, about two nights before their ominous and vague message to fans that they were going separate ways for at least a while. I was heartbroken—they are pure magic. When I found out they were coming to Berklee last fall, I was lucky to get a third road seat for their show. I got there after a stressful drive from Maine on a Friday afternoon and settled into my seat just in time to see their opening act, L.A.’s Milo Greene. I was floored—an instant fan. I was so impressed with their musicianship—four guitarists/pianists/vocalists and a drummer. There was no lead singer. They gracefully danced across the stage, switching instruments and belting out perfect harmonies. They were selling a three song EP after the show, which I scooped up for $5 and listened to the whole way home. I think I left it in my CD player for a solid month and listened to it every single day. It has “1957,” “Silent Way,” and “Don’t You Give Up On Me” on it. It’s so so good—mesmerizing, haunting, and hopeful all at once.

Milo Greene announced a show in Boston in July (supporting their first full length album, Milo Greene) the same night I already had tickets for the Newport Folk Festival. I was bummed. When I found out they were coming back to Boston in October, I was psyched. I bought my ticket in their presale and when it came, there was a very serious announcement with the ticket from Artist Arena that I needed to be there before 7:30 and form a separate line because we’d get early entry. Cool. You know I like being up front. I had dinner and drinks in JP with my fabulous friend Tricia and made it over to Allston around 7:15. It was a ghost town outside Brighton Music Hall. I was the line. 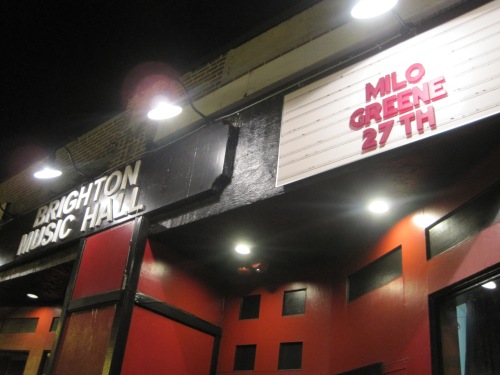 I saw band members walk to and from their tour van, I heard a great sound check, and I got to talk to their sweet tour manager from Mexico who apologized when he heard I’d gotten some wacky information about early entrance to the show. Since there was literally no one else around, I really wasn’t worried about the confusion. I saw a girl in plaid check inside and then walk by a few times, glancing at the door. On her third pass, I asked her, “Hey, want to join me in line?” Maddie was awesome. She is a first year at Emerson College and a serious Milo Greene mega fan. She grew up in northern California and went to the summer arts camp where Milo Greene member Andrew Heringer worked. When he walked by us, she said hi to him and he spent the next 20 minutes chatting with us while a college group set up for an interview with the band under the marquee. Andrew was down to earth and a completely normal guy. I’m glad we had time to talk. I’m always nervous about meeting musicians because if they’re not nice, it ruins the music for me. He solidified my love for Milo Greene. He sang along to Lucius, whose sound check we could hear from outside, and is an obviously big fan of their music. It got me pumped to see them, too.

My concert friend Bob was shocked I’d never seen a show at Brighton Music Hall (it’s strange, I know), so when I asked him where to park and where I should snag a spot inside for the best view, he sent me a thorough reply and a personalized map of the venue with suggestions for where I would want to stand for the show. He rocks. Maddie and I went in together and had no competition for spots up front for quite a while. We found a spot we liked just to the right of center stage and set up camp and put our stuff to rest on the stage—just how I like it! We chatted for a while about how excited we both were for the show, right up until Lucius took the stage.

Brooklyn’s Lucius rocks. They came out in costume—the ladies in sort of futuristic white dresses and shoes, and the guys in matching white dress shirts, red suspenders, and white dress shoes. They established their unity before singing a note. They are incredibly percussive and have strong harmonies. They were a good fit for Milo Greene musically. I’d say Lucius is a bit edgier and Milo Greene a bit more folky. All of the member of Lucius played percussion and sang and/or played another instrument basically the whole set. There was a lot going on onstage and I really liked their sound. They talked about how their van and all of their equipment had been stolen earlier in the year when they’d last played Boston, but how their fans contributed via Pledge Music to help them replace everything. I’m glad they decided to come back to Boston—my goodness! 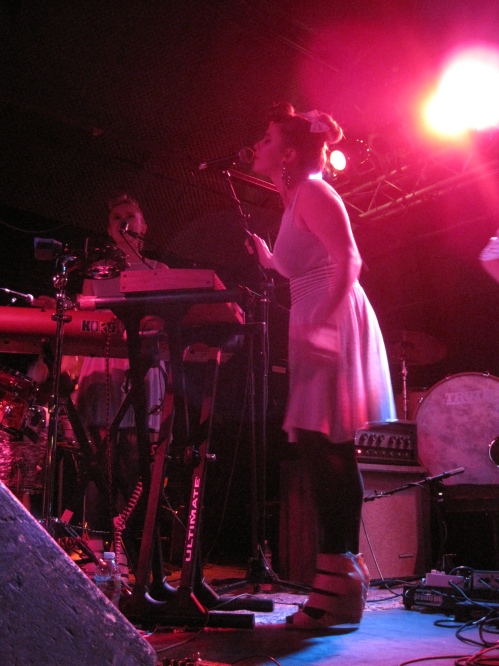 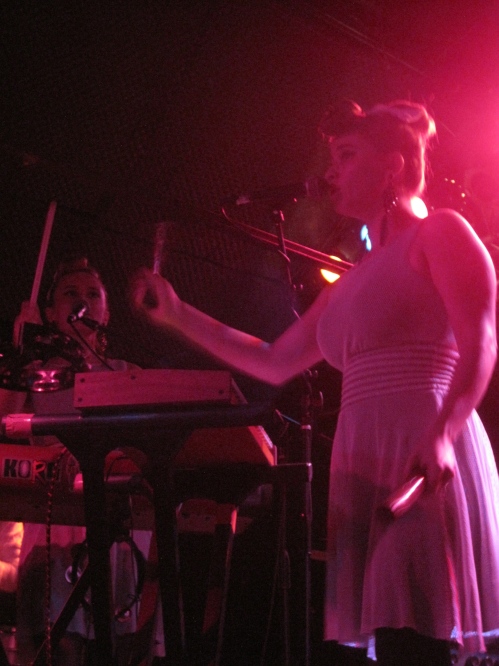 They invited Boston’s You Won’t up for “Turn It Around.” They played tambourine and additional drums (SO much percussion!) and sang some, too. They are currently on tour together supporting Pearl And The Beard (who I missed last night because I saw Trampled By Turtles and Spirit Family Reunion). Three of the members of Lucius unplugged for their final song—a cover of “It Doesn’t Matter Anymore” by Buddy Holly. They played in the center of a delighted crowd fully willing to listen attentively late at night on a drunken pre-Halloween weekend. I was impressed that Lucius tried it out and how well it worked. I’d see them again in a heartbeat. I talked to them briefly after the show and bought their four-song EP that I have listened to hundreds of times at this point. It’s fantastic.

Lucius with You Won’t 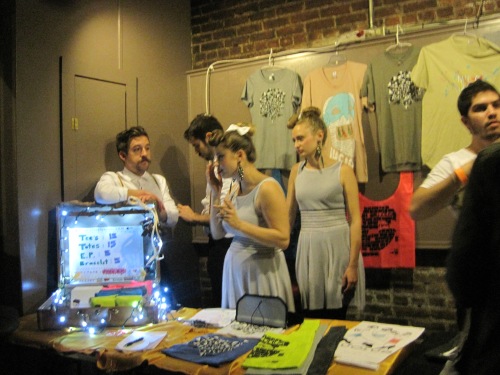 Lucius at the merch table

I love Milo Greene’s new self-titled album, but I think their strength is in their live show. It is amazing to see how they constantly and seamlessly hand instruments back and forth—all such talented musicians—and how even though they all sing and there’s clearly no lead singer, their sound has power and is full and strong. Drummer Curtis Marrero is the only one tied to one instrument—Robbie Arnett, Graham Fink, Andrew Heringer, and Marlana Sheetz—are all over the stage and play everything. It’s impressive and makes for a dynamic show.

Don’t You Give Up On Me

A Shot in the Arm (Wilco cover)

My favorite song on Milo Greene is “Son My Son.” I love the line “just remember the weight of your world’s only resting on me.” MG played it right before a phenomenal cover of Sufjan Stevens’ “Chicago” that Lucius joined them for. They brought it down right after that with lovely “Autumn Tree.” Their set was short and they played their entire album. I hope that even though they’ve been busy on the road, they’re working on their next songs. I was sad they wrapped so soon—it was so good that it felt like mere moments—but we asked for an encore and they happily obliged.

Lucius with Milo Greene for “Chicago”

MG was very complimentary of Boston and seemed genuinely appreciative of the crowd. They promised to come back more often. They gave a lot of shout outs to people in hilarious Halloween costumes, including a guy in a moose ensemble who I snapped a close up  picture of. They played a two-song encore—Wilco’s “A Shot in the Arm” and ended with “1957,” which is the awesome and dynamic single they’re currently playing on the late night talk show circuit. 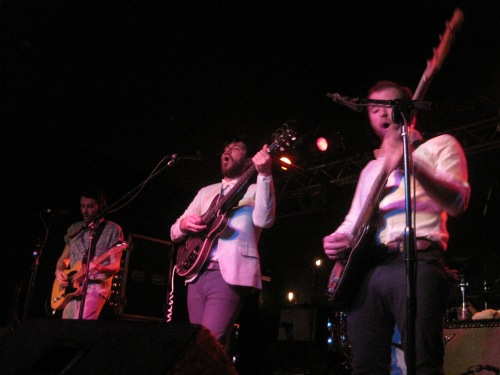 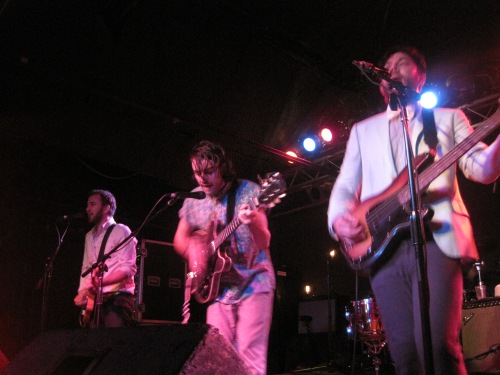 I’d LOVE to see Milo Greene come to Portland, Maine. I’d like for more of my friends to know about them. 98.9 WCLZ in Portland has been playing “1957” for a bit now, and I am confident that this band is going to be huge. Check them out, and check out Moddison, the film that they made to accompany their album. These are some creative, talented people deserving of your attention.