I thought my dear friend Shaun would be writing this post. I was so sure, in fact, that I didn’t take notes at the show—it was a bit liberating, actually. But I guess that visiting assistant professors at prestigious New England liberal arts colleges are very, very busy because I haven’t seen the email I expected summarizing our night out on the town show up in my inbox. Ahem. I’d like to say a special thank you to the fabulous Nicholas Beaudoin who shared some of his pictures from nearer to the stage with me to share with you.

I was thrilled to buy a ticket for this show because I passionately believe in marriage equality and fun. donated all of the show’s proceeds to Mainers United for Marriage. From the Mainers United for Marriage website, “’More than anything else, we want to use our voice to make a difference. Maine has a big opportunity in this election, and we want people to be aware of the power they have. It’s an incredibly important, historic election, and we want to make sure people, especially people our age, know what’s at stake,’ said fun. lead singer Andrew Dost.” Ian Grady, Deputy Communications Director for Mainers United for Marriage followed up in an email to supporters, “fun. asked how they could help us win marriage in Maine and this Halloween concert to benefit Mainers United for Marriage was born. It’s incredible and we’re beyond grateful for the band’s support.” The show sold out quickly, and I was excited that Shaun and I got our tickets in time. I should also mention that I’m elated that Mainers voted to support marriage equality less than a week after this show and marriages for same sex couples will begin in Maine on December 29th!!!!!! 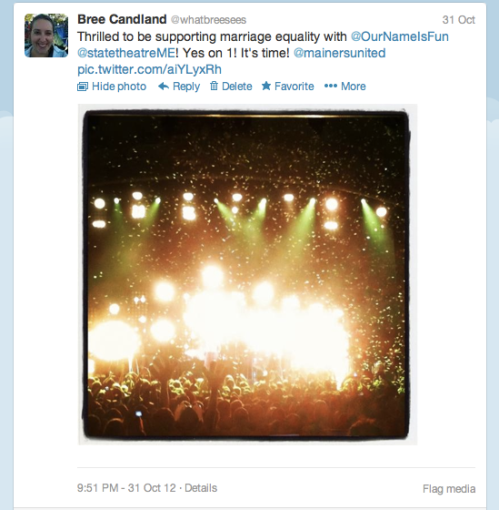 I am a BIG fan of marriage equality! So is fun.!

fun.’s Nate Ruess, Jack Antonoff, and Andrew Dost are equally passionate about equal rights and recently started The Ally Coalition as a way to raise awareness, support, and community around these issues. Jack wrote to those of us on fun.’s mailing list, “AC is a place where we as allies can make our statements and make them clear, together. we can use social media to make sure our friends and family hear our words, see our videos and read our posts. this is vital because this is how the conversation gets started. this is how change happens. this how people who are afraid of this issue can be guided in the right direction towards a future in which no innocent people are treated as second class citizens.” Check out their interview about this tour and the creation of The Ally Coalition.

Shaun and I had a leisurely dinner at nearby Local Sprouts and then got in line for the show just as doors opened at the State Theatre. We got the sense that we were by far the oldest people there. As we walked past the front of the line, two seniors from Mt. Ararat shouted out my name—Nicholas and Zack had been in line for hours already because they wanted to be near the front. I applauded their zeal, but Shaun and I correctly strategized that if we found a spot in the bar, we’d have a lot of room and a great view of the stage.

I don’t remember much about Brooklyn’s Miniature Tigers’ opening set. Their sound wasn’t really my thing. During the change up in between sets, Shaun and I played a game we invented for this Halloween show called “Are They In Costume?” We weren’t always sure. We saw a lot of scantily clad young women in kitten gear and also some simply scantily clad young women. The line between Halloween costume and Wednesday night concert attire was definitely blurred. I LOVED the guy dressed in a Post-it Note suit like the cover of Office Space and got a kick out of the woman dressed up in a Kennebunk Zumba leotard. 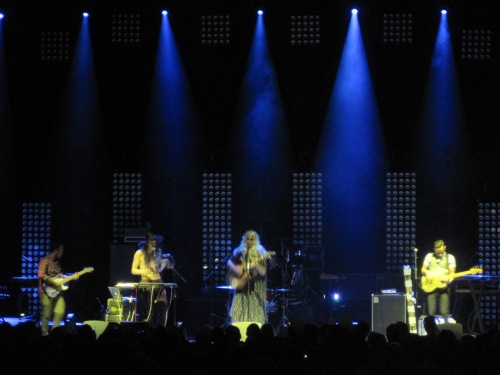 Props to the Post-it Note guy! Is the woman in red in costume? I’m not sure.

fun.’s crew dropped off a red couch and a sign that said “Central Perk” just as fun. took the stage. All six of them were dressed as a different character from Friends, and they opened with the show’s theme song, “I’ll Be There for You” by The Rembrants. They started and ended their show with the song, in fact. Someone took a video. I’ll be completely honest—by this night I had heard “We Are Young” and “Some Nights” on the radio too many times. When I heard either, I switched stations immediately. I didn’t seem to be able to get away from either song. This show changed that, though. I was so incredibly impressed with fun.’s talent and Nate’s insanely gifted vocals that I loved hearing both songs live and have started listening to them again on the radio from time to time. 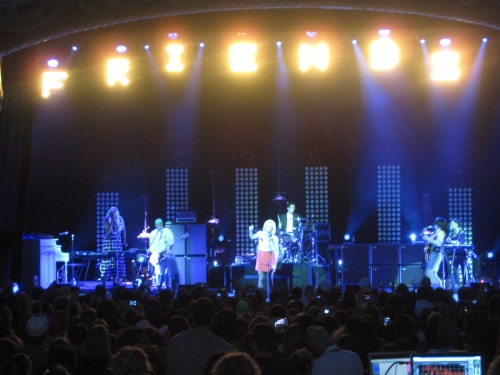 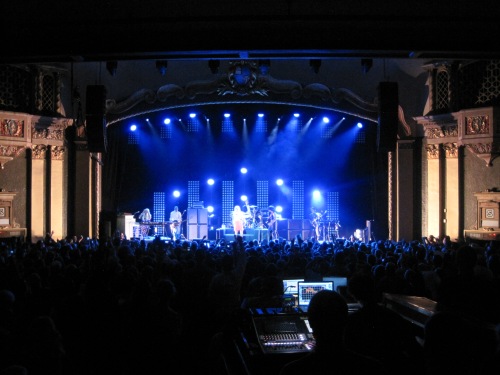 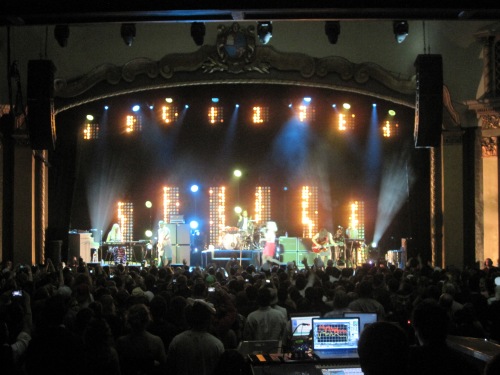 Someone kindly posted an approximate set list for the night on setlist.fm:

Why Am I The One

All The Pretty Girls

You Can’t Always Get What You Want (Rolling Stones cover) 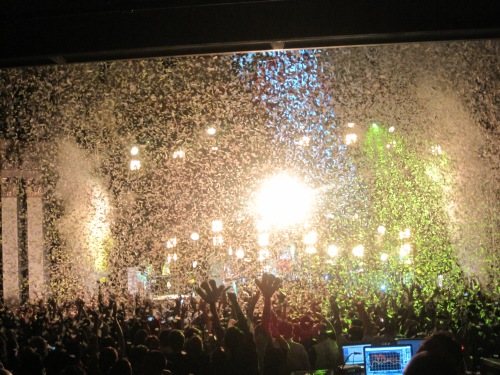 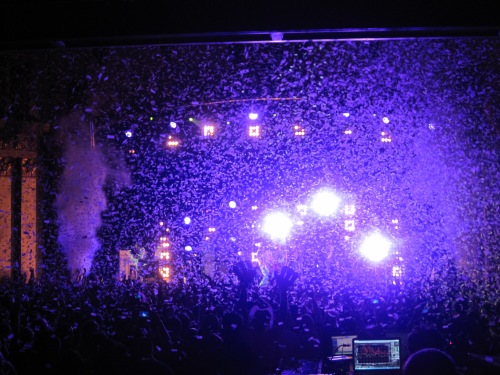 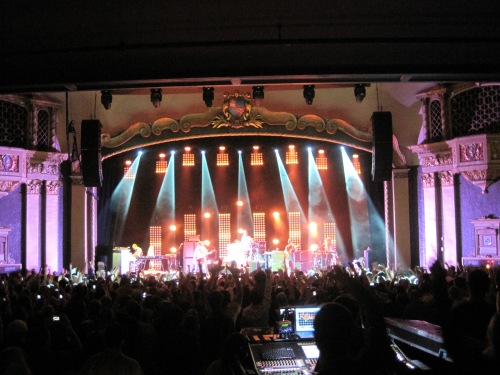 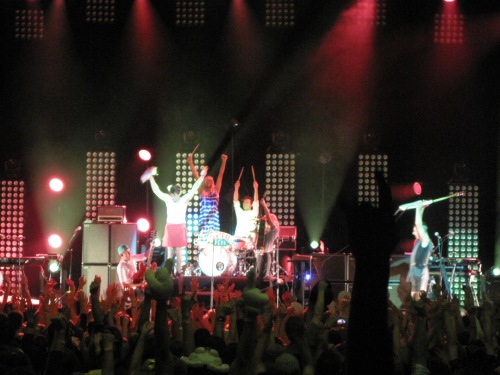 “Why Am I The One” was a favorite of mine. I loved hearing “The Gambler.” It’s the first fun. song I ever heard and my friends Megan and Adam danced to it as their first song at their wedding last summer. I also really love “Carry On.” I was completely impressed with fun.’s stage presence and energy. They worked the stage tirelessly and Nate’s voice impressed from start to finish. Shaun and I started making a list of songs we’d like to hear him cover—classics like Whitney Houston, Michael Jackson, and Journey. He has such power in his voice. A few people who knew I went to the show asked me afterwards if fun. was any good live. Since they use some audio effects and auto tuning on their album, I guess some people think it means that fun. can’t sing. That’s absolutely not the case. Everyone at the show can back me up on that. 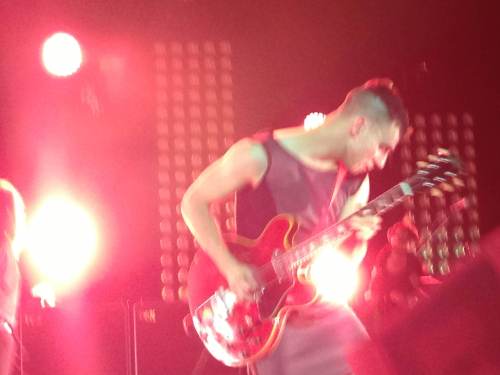 Photo courtesy of Nicholas Beaudoin. He was WAY closer to the stage than me!

Great close up of Nate Ruess. Photo by Nicholas Beaudoin.

I laughed during their cover of “Smelly Cat” from Friends and thought it was adorable how the band stuck to the theme all night. They covered us in confetti and sweat and high notes and messages about how honored they were to be in Maine supporting marriage equality. fun. bridged the gap between stage and audience and made us feel part of something special. They got the crowded incredibly worked up towards the end of their set, wrapping it with “We Are Young,” “Carry On,” and the Rolling Stone’s “You Can’t Always Get What You Want.” We heartily asked for an encore and they continued to impress with “Some Nights” and “Stars.”

With one final round of “I’ll Be There for You,” fun. took their leave and Shaun and I (and the tired preteens sitting near us just below the bar snuggled with their moms well after bedtime) left the State pretty early on a school night, energized by the music and impressed by the performance. fun. does not disappoint! I have a feeling they’ll come back to Maine, too. We have a lot to celebrate! I so appreciate what fun. did to contribute to helping Mainers earn marriage equality. I always respect people who use their talents to help others. Thanks, fun.! See you soon!?!