I don’t think I’ve ever been caught up on blogging. Ever. It’s pretty awesome. My dear friend and uber outdoorsman Chris Bartlett is writing a guest post about the fantastic Martin Sexton show we saw a little over a week ago, so I had some free time to finally tell you about Caitlin Canty’s delightful fan-funded sophomore album, Golden Hour. I’m on my way to Boston to see Mumford & Sons tonight, so I’ll be back to writing tomorrow.

I first saw Vermont-native singer-songwriter Caitlin Canty completely by accident when I was at a Jeffrey Foucault show back in May of 2012 at One Longfellow Square and he called her up on stage to sing a couple of songs. I was immediately struck by her lovely voice, and we chatted a bit after the show. I learned she was in Portland recording her second album Golden Hour. I was already excited to see her headline a show, even though I haven’t been able to make that happen just yet. 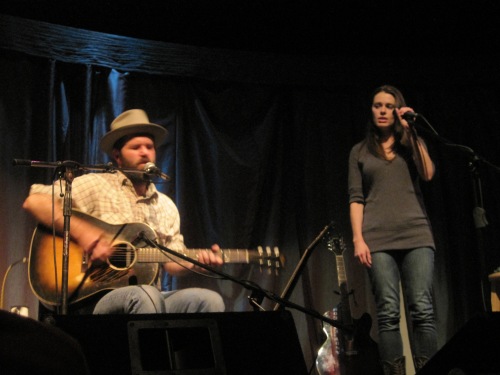 Jeffrey Foucault and Caitlin Canty at OLS in May 2012

We stayed in touch, and Caitlin kindly sent Golden Hour to me after it was released in early October. I love it. Her voice is strong and clear but still delicate. It’s got country grit and it’s dark in places—which is an interesting juxtaposition to her sweet, airy voice. I’m at a bit of a loss to name my favorite songs on the album. I listen to it all the way through quite often. I think the truly haunting “Do Not Stand At My Grave” stands out. “Never Again” laments the mistakes we make without being self pitying. I like the lyrics “where did my time go/your sugar coated words sounded rehearsed/but if I have another one/just one poetry will come/I’m too old to be this young.”

Canty’s cover of Darlingside’s “Sweet and Low” reveals parts of the song I hadn’t noticed before. I am thrilled to have discovered Darlingside in 2012. Their show was easily one of the best shows I saw in 2012 (I saw 45, so that means something). Here’s a video of some of Darlingside covering Damien Rice’s “Volcano” with Canty. Sam Kapala of Darlingside recorded and co-produced Golden Hour. Most of the members of Darlingside (who also went to Williams College and are good friends of Canty’s) also lent their vocal and instrumental talents to the album. Canty’s been touring lately with Harris Paseltiner, Darlingside’s virtuoso cellist.

Darlingside at OLS in September 2012

Good things are happening for Caitlin Canty, and they are well deserved. Her music is in rotation on the “Country and Folk” channel on Lufthansa flights. Her second album has been well received. People are getting out to see her live. Check out this glowing look at Caitlin’s career that includes a lot of biographical information. I love knowing where a musician comes from and what’s inspired them. Check out Canty’s touring schedule here. I hope to see you at one of her shows sometime soon!