This show was one of those rare gems—it was such a treat to see both of these bands live!

I’d seen Dan Mills play at Bowdoin College in the fall of 2009—my dear friend Megan worked in student activities then and organized a “Shameless Plugs” concert (I found a video) of musicians with ties to Bowdoin. Dan is outgoing Bowdoin College President Barry Mills’ nephew. I joined Megan for the show and was impressed. I’d stayed on his mailing list all of these years, and was excited when he let us know he’d finally be back in Maine for this show at One Longfellow Square.

The One Longfellow Square board member who welcomed us introduced Dan Mills as Dan Hill. Dan smiled and came to the stage, played a sweet song and then said “it’s totally no big deal, but I figured I should tell you early on that I’m actually Dan Mills.” He handled it graciously and showed no ego—a big plus. Newly engaged Dan played a song about asking a girl’s father for her hand. It was a funny juxtaposition with the chatty girl sitting behind me who was texting with boys she was meeting on Tinder during the show (we moved during intermission). Dan appreciated the overall very attentive audience and said it was like playing in his living room. He told us they usually tour as a five-piece band, but it was just Dan, Adam Podd on upright bass, and Mark Goodell on guitar. I particularly liked “The Good Son” and singing along to “Lonely When You’re Gone.” I think Dan’s voice has a James Taylor thing going on. He’s great. 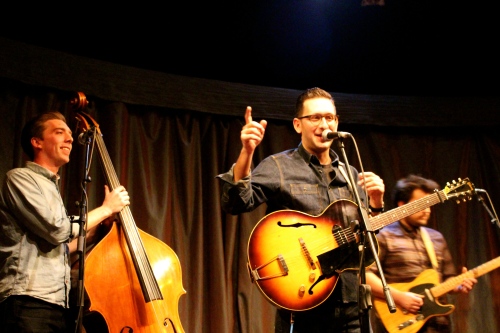 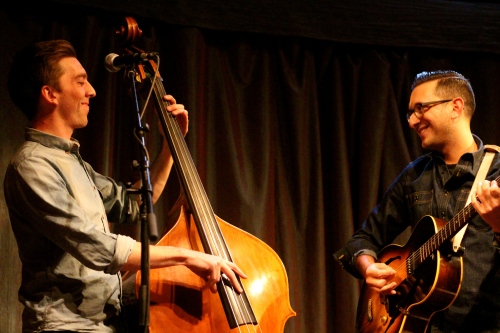 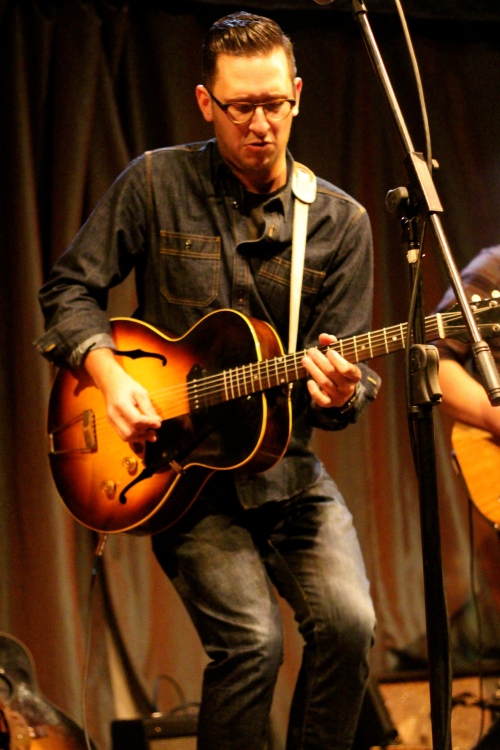 I’d never heard of North Carolina’s Mipso, and am SO very glad that I happened to be front and center to see them live. I’ve haven’t been seeing many new-to-me bands lately, and so this fresh, charming, talented group was such a pleasant surprise. From left to right across the stage, Mipso is Jacob Sharp on mandolin, Wood Robinson on upright bass, Joseph Terrell on lead vocal and guitar, and Libby Rodenbough on fiddle. Their website aptly says “the renegade traditionalists of Mipso are doing their part to take three-part harmony and Appalachian influences into new territory.” I liked them immediately. Their songs are meaningful and it was so refreshing to be able to hear every single lyric sung by Joseph with his crystal clear, bright voice. The harmonies and vocals added by Jacob, Wood, and Libby throughout the night made rounded out their lovely, airy sound. I’m going to go on a little bit more because I do that when I’m excited about a band, but if you need to stop reading now just know that this band is one of the best I’ve seen in a while. 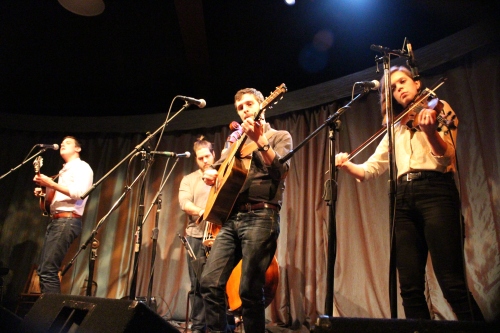 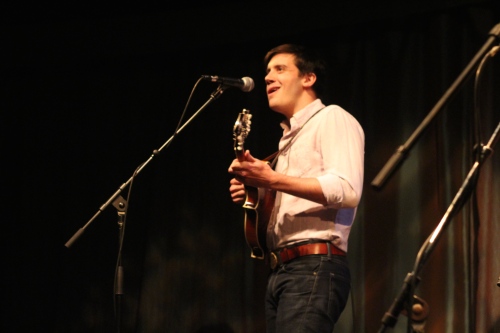 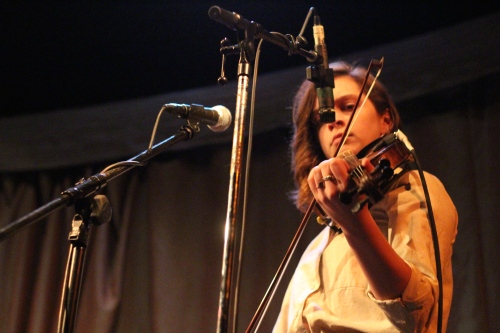 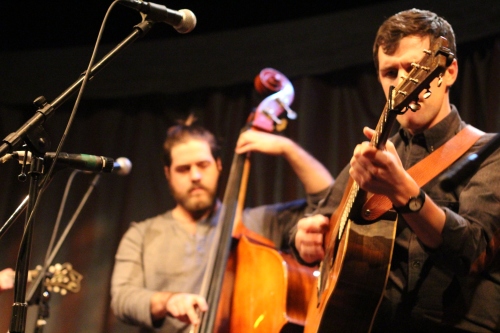 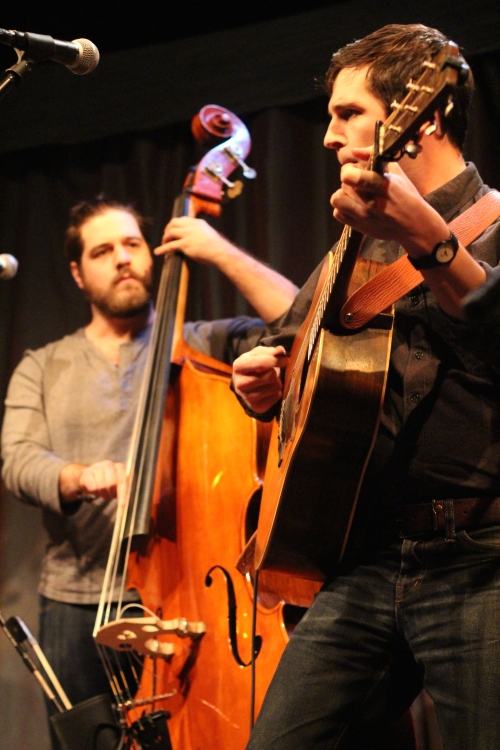 Mipso told us it was their first time in Maine and they’ve played 160 (!) shows in the last year, including touring Japan (check out this documentary)! The band met at UNC Chapel Hill and Jacob, Wood, and Joseph toured for a year after graduating together while Libby finished her senior year. They joked they’d never had someone open the show for them that was such a show stealer (a nice compliment for Dan Mills and his band). Everyone was genuine and engaging on stage and I found myself completely drawn in. Jacob showed off his flashy “Bluegrass” belt buckle and said (joked?) he’d bought it for a friend for Christmas, but that for some reason they weren’t in touch anymore. When they introduced “Red Eye to Raleigh,” Libby chimed in to tell us “Raleigh is in North Carolina—just for context.” 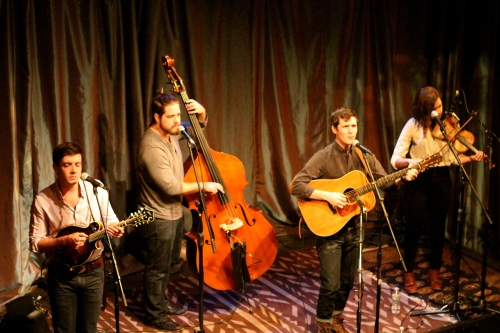 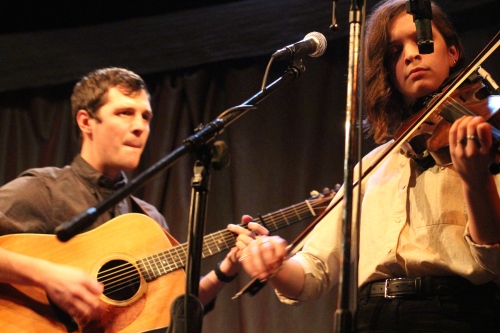 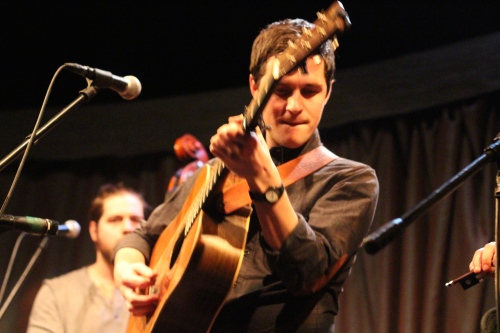 Joseph told us about growing up playing guitar with his grandmother and sang “When I’m Gone” for her. I found this blog post with an entire article about the inspiration for just this one song. I love context! Joseph won first place in the Chris Austin Songwriting Contest at MerleFest in 2014 for “Angelina Jane Is Long Gone.” No wonder he won, right? The band told us how much they’d enjoyed their time in Portland—being hosted by The Ghost of Paul Revere, meeting talented violin and guitar makers, enjoying local beer and ramen, and having dinner with Joe Walsh (one of Jacob’s idols). It sounded like a great visit to Portland, and the show was packed with people who obviously knew Mipso personally (friends from North Carolina going to medical school in Maine) and a handful of fans who even knew all of the words to their songs. I’m not sure why I’m so late to the Mipso phenomenon, but I’m on board now. 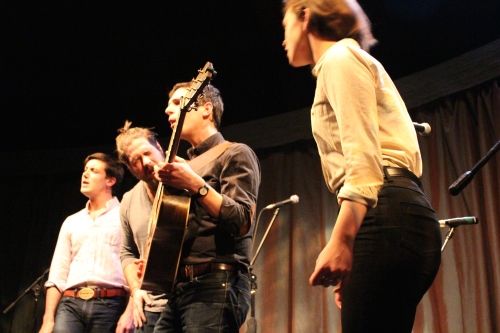 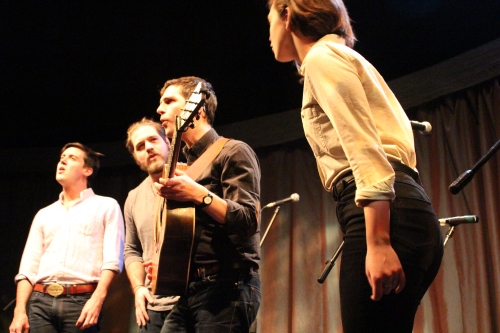 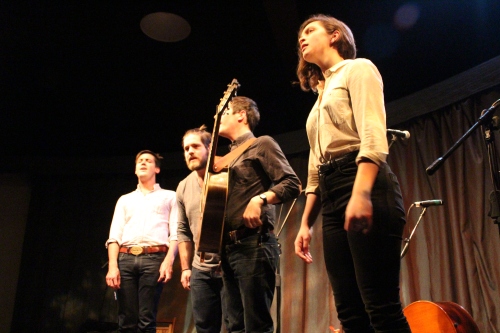 I loved Libby’s rich lead vocals on “Down in the Water,” and the guys harmonized particularly beautifully on that tune. They tried out a couple of new songs (and a new verb—“guinea pigging”) on us, including one they’d never played anywhere before that I really liked called “50 Bucks.” Another of my favorites of the night was “This Lonely Town” which included the very pretty lyric “When the seasons change/I hope I never stay the same.” I started to be sad about halfway through Mipso’s set when I realized that they’d eventually have to stop playing, and when Mipso said goodnight, I was bummed. Luckily, they played a last song completely unplugged—a New Grass Revival cover—as a lovely sendoff. Mipso–hurry back to Maine! Friends–check this band out!