My dear friend Dot asked if I wanted to join her for her very first Ellis Paul show. Of course I wanted to! I love going with Ellis Paul first-timers to see their reaction to his fantastic storytelling and engaging live show. Dot and I met after school and carpooled to Boothbay Harbor, where we boldly invited ourselves to share a big table with a man and his son at the very crowded The Thistle Inn (who, of course, we found out we had people in common with) and made it over to the Boothbay Opera House when doors opened. I hadn’t been to the Boothbay Opera House in years and it looks fantastic!

Guitar prodigy Shun Ng took the stage and wowed with very impressive, complex guitar pieces and reinterpreted songs, including “Bohemian Rhapsody.” Ellis is a mentor to this talented 25 year old, and helped him write the lyrics for the first of the songs he played that night. When Ellis’ guitar string broke later in the evening, Shun brought Ellis his own guitar to use. I liked seeing their friendship and admiration for each other, and am happy to see Ellis’ continued support of young musicians.

Ellis took the stage and welcomed us warmly. He lived for a couple of years in the midcoast and many of his friends and neighbors from those years were at the show. This was my 44th Ellis Paul show, and I think he sounded the best he has in ages (even though he told us later in the show that he had a bit of a cold). The majority of songs he played over the course of the evening were from his most recent fan-funded album, Chasing Beauty, and his 2010 release, The Day After Everything Changed. Ellis showed us the vinyl version of Chasing Beauty and a copy of his first children’s book The Hero In You. He reminisced with the crowd throughout the night about shows he’s played in the area, including a show years ago at Bowdoin College (I couldn’t help myself and shouted out that the Bowdoin show was my first time seeing him and he joked that “you never forget your first time!”). Laurie MacAllister, who plays bass for Red Molly, joined Ellis for two songs. They honored the late Pete Seeger by playing his “If I Had A Hammer” and closed the night together with a beautiful version of “Let It Be.” I see Ellis live so often that I am very familiar with the content of his live show, but I got a special treat because he played a song I’d never heard before–“I Ain’t No Jesus”—which I loved.

I was glad that Ellis played some of my favorites for Dot to experience live—including “Maria’s Beautiful Mess” and “Hurricane Angel.” We got to sing along on “Kick Out the Lights” about Johnny Cash kicking out the lights at the Grand Ole Opry. Ellis hopped off stage and played “Annalee” and “The World Ain’t Slowin’ Down” unplugged from the floor. He asked us to sing along and at some point I realized mine was the only voice besides his I could hear. It was as close to singing a duet with Ellis that I’ve come. Maybe we should do a song together at my 50th Ellis show? It won’t be long. Thanks for a great night! 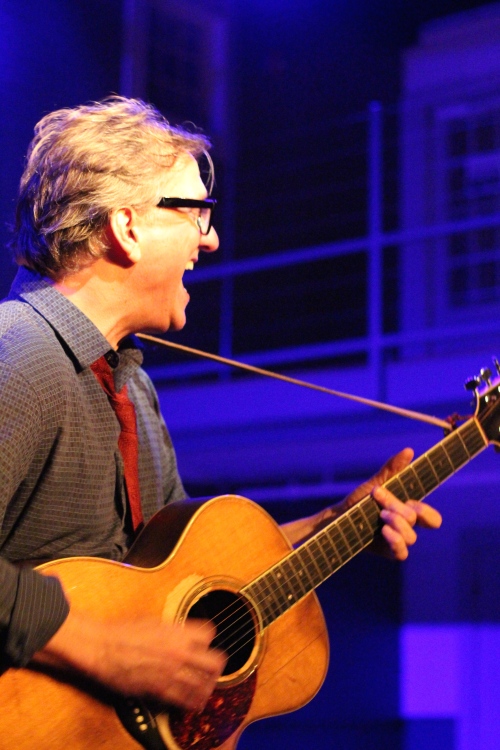