I snagged a ticket for this show at Thompson’s Point the moment they went on sale, and I am so glad I did. The show sold out early (impressive, given the capacity at outdoor Thompson’s Point), and as show openers were announced, I got more excited, because both Langhorne Slim and Rayland Baxter have both been on my radar for ages. I feel really lucky that I got to see three great bands for the first time at a fantastic venue on a perfect summer night.

I picked up my friend Marian and we got to Thompson’s Point early to grab a spot up front. We ended up seventh row center, surrounded by great people who’d also arrived early to enjoy the music up close. There was a brief bit of drama where a woman pushed her way through the crowd to get a better spot, but another woman who’d been there since doors opened with her kids convinced her to do the right thing and leave. Concert etiquette–if you want a good spot, arrive early. You can’t push your way to the front and expect to stay there and have people welcome you with open arms. It’s rude. Don’t do it.

Nashville’s Rayland Baxter took the stage and was friendly with the crowd. 98.9 WCLZ has been playing his song “Yellow Eyes” for ages, and I was glad to hear that live. He seemed like a chill guy and his country music inspired jam band was a fine opening to the night. 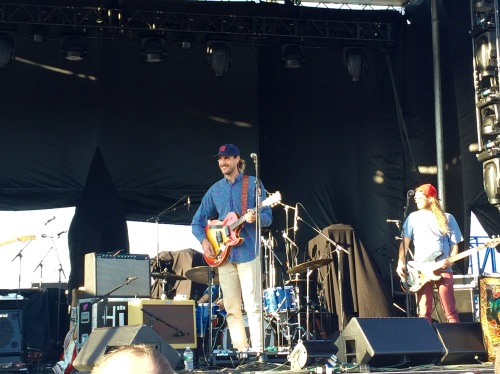 I have a handful of friends who are devotees of Langhorne Slim, so my expectations were high. Langhorne Slim & The Law took the stage and worked it. I like the lyrics to his opening song “Airplane”—You and I’ve got our backs against the wall/When you don’t move, no one throws you the ball/Life’s a dance between riding the bench and/Waiting for your chance to swing for the fence.” “The Spirit Moves” sounds a lot like a song The Lumineers would write, so it seemed fitting that Langhorne (born Sean Scolnick) would open for them. We sang along on “Love Crimes” while Langhorne jumped off stage and into the crowd and sang most of the song sitting on a fan’s shoulders. I was glad to hear “Changes” live. Langhorne Slim & The Law will kind of incredibly be back to Portland to play at teeny One Longfellow Square on Friday, October 28. It will be a great show and will sell out early. 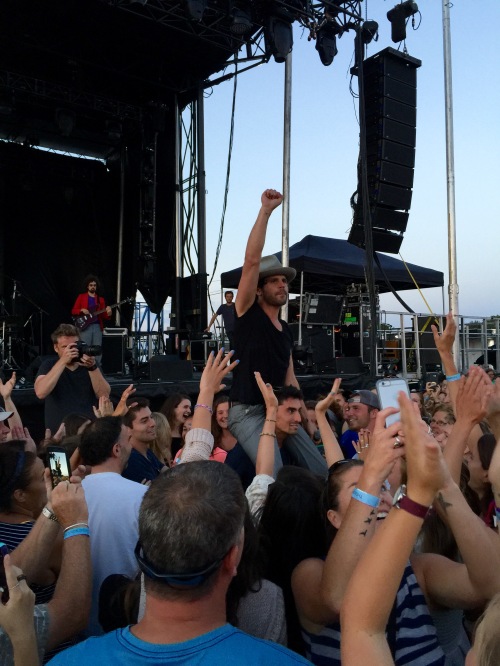 The Lumineers took the stage and the audience roared. My friend Ken Templeton introduced me to them back in 2012. I fell in love with their Daytrotter session he recommended and looked up their tour schedule, just to find I’d missed them playing at teeny tiny Red Room at Cafe 939 at Berklee in Boston by three days. I’ve been waiting for four years to see this band. I also sang their breakout hit, “Ho Hey,” at my best friend’s little brother’s wedding. He’d played the song to woo his now-wife and I sang it while they had their first dance.

The huge crowd roared with applause and sang along every word of every song. It was such a feel good night. I loved hearing “Ophelia” and “Ho Hey” early in the set. Lead singer Wesley Schultz made a deal with the enormous crowd that we’d all put our cell phones away after “Ho Hey” and just be present in the moment. It was so refreshing to see a show without having to watch through the cell phone screen of the person in front of me. Wesley told us that “Cleopatra” is a true (and heartbreaking) story of a female taxi driver who he met in the Republic of Georgia.

The band grabbed their instruments and ran back to rear of the crowd and played a few songs on a small stage set up there, including “Gale Song,” which was featured on the Hunger Games soundtrack. I thought it was cool that the band wanted to reach as much of the crowd as possible. When Wesley returned to the main stage, he walked through the huge crowd and right by me! The Lumineers returned to the main stage for another eight or so songs and a three song encore. They wrapped the night with “Stubborn Love,” which the happy crowd ate up. What a night! I feel lucky I got to be at this show. Seeing The Lumineers live was well worth the wait.