Ellis Paul is my favorite singer-songwriter. A Maine native, he’s an incredible storyteller, and I have taken every opportunity possible over the last thirteen years to see him live. This was a delightful night, and I’m so glad to have been in the audience. I’d asked Johnson Hall’s Executive Director Mike Miclon to bring Ellis Paul to Johnson Hall when he first took charge of the venue a couple of years ago, and he readily obliged. Before Mike introduced Ellis to the stage, he singled me out and said that this was my 47th Ellis Paul show and gave a kind shout out to whatbreesees.com, as well. Mike said that he trusts my taste in music, so takes my booking advice seriously. It was such a feel good moment for me, and one of the reasons I love seeing shows at Johnson Hall in teeny Gardiner, Maine so much. It feels like home. 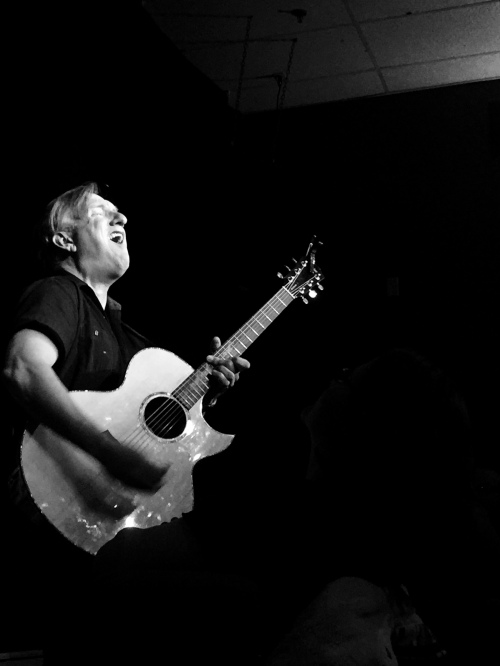 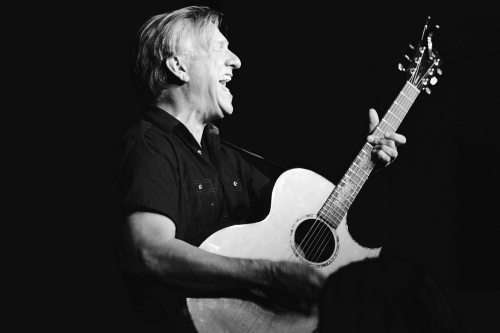 Ellis took the stage and said his pickup on his guitar wasn’t working, so he came down into the audience and played the bulk of his set unplugged from there. It was such an intimate experience, and we loved it. Ellis had written a new song about traveling that he was still using notes for, and a sweet older gentleman was clearly over the moon to be asked to hold it for Ellis while he sang. 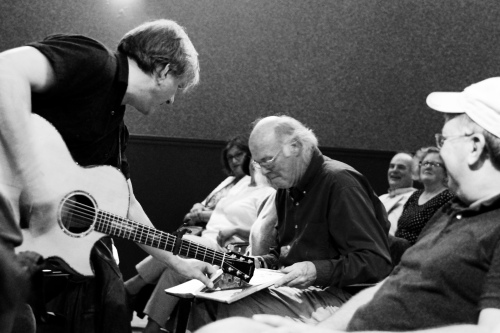 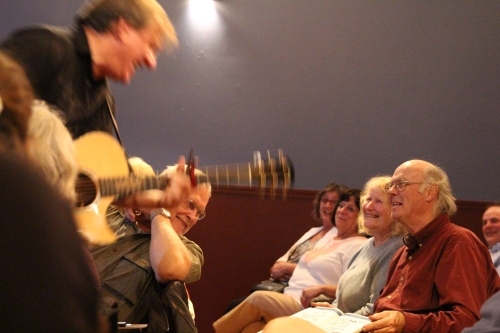 Ellis told us about his experience putting Woody Guthrie’s song “God’s Promise” to music (even after embarrassing himself by awkwardly showing Woody’s son Arlo his Woody Guthrie tattoo). I wasn’t surprised that Ellis ended the night with an impromptu ditty on the piano about how women outnumber men 60/40 in colleges and universities and are clearly poised to take over the world. He sang that he’d be voting for Hillary for his two daughters, made a joke about Trump’s bad hair, and got off stage. It turned out that someone in the audience that night wrote him a letter to explain why Hillary is the Anti-Christ and admonished Ellis for talking about politics at a folk show. Clearly, someone is very lacking in the roots and purpose of folk music! 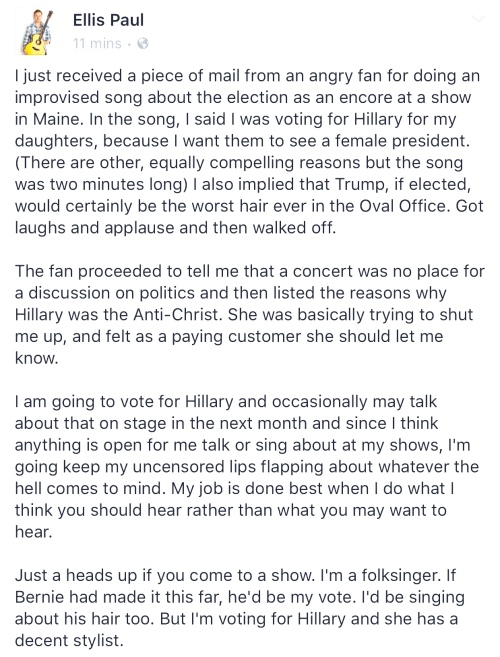 As always, it’s a pleasure to see Ellis live. I went up to see the unfinished Opera House on the top levels of Johnson Hall after the show (there’s been some new money pledged to the renovation project, too!) and just before I left, Mike told Ellis that I can really sing and that we should do a duet at my 50th Ellis show. Sounds like a plan to me!