Some nights just feel really good, and this was surely one of them. I was surprised by how quiet it was at Port City Music Hall for this triple bill on a Friday night, but it meant the small crowd had plenty of personal space and room to dance, which was a treat.

I got to Port City around 7:45 and noticed a guy I’d seen at Jamestown Revival, so I said hi. He said, “don’t you write that music blog?,” which made me feel a little famous. Sean and I chatted about bands we love and upcoming shows until Seattle’s The Native Sibling took the stage. My Spotify “discover weekly” playlist introduced me to them a while back, and I kept going back to their songs and was really excited to see them in person. Brother and sister duo Ryan and Kaylee Williams were engaging, kind, and genuine. Ryan asked if anyone knew their music, and I raised my hand from front and center. I bought their 2014 album, Letters Kept to Ourselves, after the show and have listened to it on repeat. Kaylee and Ryan were nice in real life and were glad to know I’d already been a fan. Sometimes their song “Here With Me” makes me a little teary. If you like lovely songs with airy harmonies, you’ll like The Native Sibling. 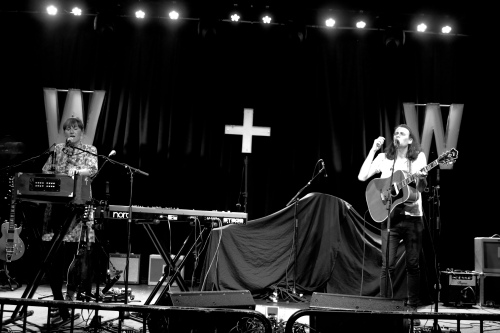 The Native Sibling–Kaylee and Ryan Williams

Hawaii’s Justin Kawika Young took the stage next, and my friend Marian showed up to enjoy the rest of the night with me. He had tons of stage presence and warmly interacted with the crowd. He asked if any of us had been to Hawaii, so I raised my hand and we ended up having a quick chat during his set. He told us he’d written a song about justice based on a book he’d just finished reading and I was impressed with his passion for social justice. He also played a fantastic medley of songs from the 90s that made my night. Justin had a smooth voice and lots of charisma. Here’s a video of Justin performing his song “Three Weeks From Tomorrow.” I spoke to Justin after the show and he told me that I sounded like a native when I pronounced Hawaiian places, which was a huge compliment. 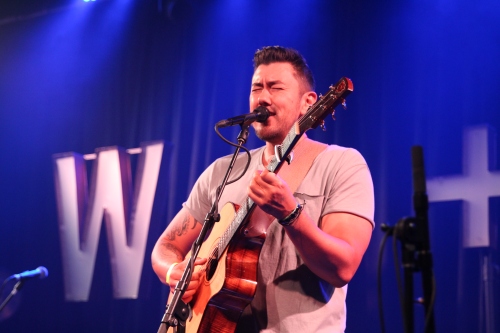 Aimsel Ponti showed up just in time for The Wind and The Wave’s set. She’s a fan. You can read her interview with the band here. Austin’s The Wind and The Wave sounded great. Patty Lynn has a lovely voice. Guitarist/vocalist Dwight Baker told us he was really high, and it showed. The band didn’t interact with us hardly at all. I know we were a small crowd (which might have been disappointing to them), but we were enthusiastic, and it was a bummer that we didn’t get a chance to get to have much of a show experience. Their newest album, Happiness Is Not A Place, was recorded live and is worth a listen. Maybe the band had an off night, but that album is better than their live show was. I ended up chatting with Patty Lynn after the show, and she was very nice, so I expect they have the potential for a more energetic, engaging live show. Their song “Grand Canyon” is about not taking things for granted, and it’s excellent.

Overall, this was an effortless, fun night, and I am glad I was there.

Tagged as Aimsel Ponti, Grand Canyon, Here With Me, Jamestown Revival, Justin Kawika Young, Letters Kept to Ourselves, Port City Music Hall, The Native Sibling, The Wind and The Wave