Jamestown Revival with Hannah Daman and the Martelle Sisters

Some shows totally catch you by surprise, and this was definitely one of them. It was well timed, too, because it was also my birthday. This show really made the first day of my new year a special one. I got to Port City Music Hall early enough to snag my favorite spot, and I ran into and got to catch up with Maine Youth Rock Orchestra Executive Director Kevin Oates. It was a treat to be greeted with a big “Happy Birthday” and a hug from him to start the night. Kevin had to head backstage to get ready, and a small crowd emerged just in time for Hannah Daman and the Martelle Sisters’ opening set.

I saw Hannah and the Martelle Sisters for the first time back in September, when they played with a bigger band and opened for Kaleo. I liked them back then, but they were even better at this show. They took the stage, just the three of them, with a guitar, mandolin, and violin. I was impressed by the fullness of the sound they created. I was glad my friend Marian showed up early on in their set to enjoy it with me. Kevin joined them on cello for a couple of songs, and it’s always a pleasure to hear him play.

A proper crowd streamed in during the opening set, and people were clearly pretty pumped to see Magnolia, Texas’ Jamestown Revival. I’d skipped their first visit to Portland back in October because I didn’t know their music then and it can be tough to get pumped for Sunday night shows, but I regretted it. I was glad for the chance to rectify the situation. Plus, The Ghost of Paul Revere is currently out on tour with them and has spoken very highly of them. Their endorsement matters. I got to catch up with Griffin Sherry after the show, too. He’s the best! 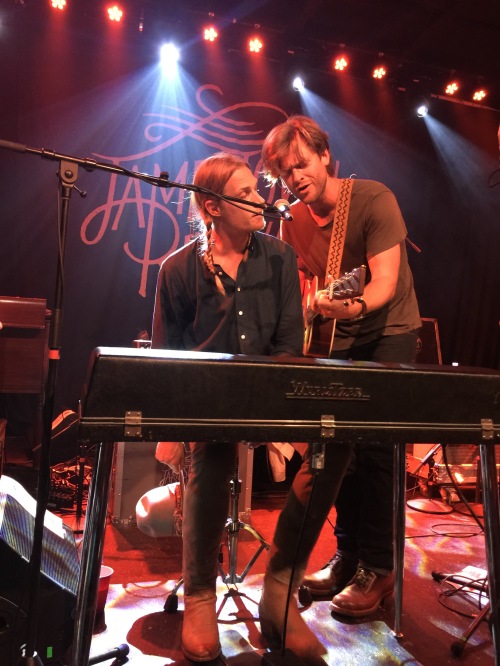 I was impressed by Jamestown Revival. I loved that the band took the stage sporting some combination of ten-gallon hats, cowboy boots, and toothpicks in a totally unironic way. Zach Chance and Jonathan Clay are the frontmen of the band, and they’ve been friends since high school. The band slayed. Every song was strong–and they interacted warmly with the crowd, played requests, and really made it a fantastic night for us. The audience was great, too. There were a lot of fans in the house and people danced and sang along. Early on in the set, Zach said that he could tell this was going to be a special night, and it truly was. 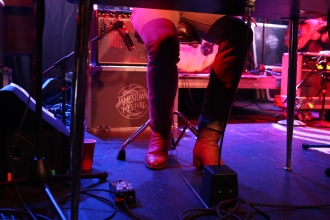 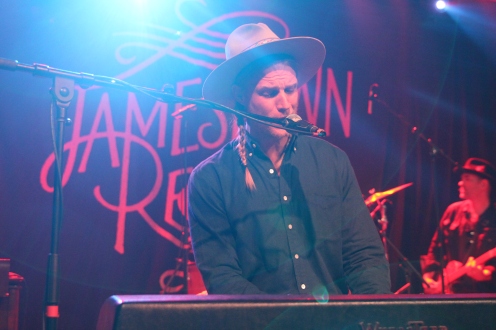 I particularly like “Love Is A Burden” from Jamestown Revival’s 2016 release, The Education Of A Wandering Man. That song is a hit, and you’ve probably heard it on 98.9 WCLZ (who sponsored the show). I enjoyed “Revival” and “California (Cast Iron Soul)” from Jamestown Revival’s 2014 album, Utah. They played “Medicine” from that album at the request of an audience member, even though it wasn’t on their set list. They also did a very pretty cover of Neil Young’s “Harvest Moon.” 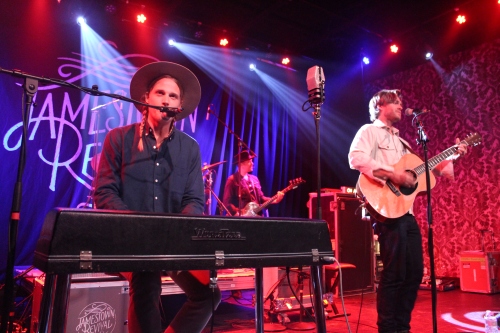 The crowd was a delight that night (which has such an impact on a show experience), and Jamestown Revival really brought it. The moment the band left the stage, Port City turned the house music on and “Footloose” flooded the room. An impromptu dance party broke out, and a woman I didn’t know grabbed me to dance with her. It was a total blast and shows perfectly the mood Jamestown Revival created in that room that night. We didn’t want the night to end. What a show! Definitely see this band live!

A blurry picture of a happy moment dancing to Footloose after the show!