U2 with The Lumineers

Seeing U2 live is always an experience. My friend Kim is a superfan, and I don’t think I’ve ever seen a U2 show without her. She organized a tailgate and we got to Gillette early to meet up with some other fans and beat the traffic. We got to hear soundcheck from the parking lot, too, and fans were pumped. My friends Aimsel and Colin did the GA thing, and we stopped by to say hello to them, as well. Kim and I did GA back in 2011 in Montreal, and well it was well worth it to be a few rows from the stage. However, it makes for an exhausting experience, especially standing outside for all of those hours in the middle of the day in the summer. Turns out, I was jealous later when I saw their pictures, so I’ll have to reconsider my position on GA next time U2 tours. You can check out Aimsel’s show recap and pictures from the GA section here. 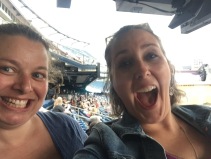 The Lumineers are excellent live, and I was really excited that they were opening the show. I saw them last summer at Thompson’s Point in Portland, and they put on a fantastic show. I loved hearing “Ophelia,” “Ho Hey,” and “Stubborn Love” again in person. I bet they had a blast playing for such a massive crowd, too. 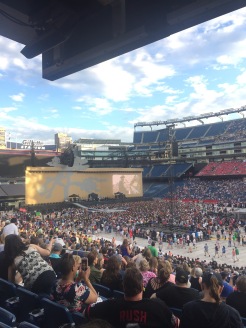 U2 took the stage and brought their A game. They opened with a mini set of “Sunday Bloody Sunday,” “New Year’s Day,” “Bad,” and “Pride” before playing their entire 1987 Joshua Tree album from start to finish. It was incredible to hear The Joshua Tree all the way through. Those songs are the soundtrack to so many lives, and it’s hard to believe the album came out 30 years ago. I feel lucky I got to be there. Also, “Where The Streets Have No Name” is definitely my favorite live U2 song, and it was exhilarating to enjoy it with 60,000+ other fans. 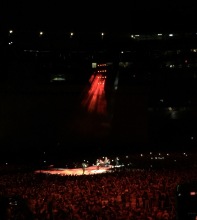 U2 always creates a phenomenal concert experience, and this night was no different. Their stage design was incredible, with the extension stage in the shape of a joshua tree. They projected stunning videos all night on a 200-foot long 45-foot-high LED screen. Also, it always feels a bit like worshipping at the Church of Bono, as I like to call it, and it’s always interesting to hear what global issues Bono will talk about. He dedicated “One Tree Hill” to Boston Marathon Bombing victim Martin Richard and told us that his family was in the audience. He said “there is no end to grief, and that’s how we know there’s no end to love.” He gave a shout out to John Kerry for his early support of HIV/AIDS research and told us that millions of people are now living long lives despite HIV/AIDS. They did a whole video montage about great women and promoted women’s equality. Finally, during “Miss Sarajevo,” we watched a video of of young woman in Syria who dreamed of making it to America someday and passed an enormous sheet with her face on it around the stadium. Bono sure knows how to use his platform to stir up emotion and affect change. 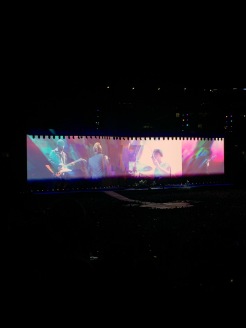 They turned up the energy for “Beautiful Day,” “Elevation,” and “Vertigo,” and closed the night with “One.” Since Boston is their favorite American city, they also treated us to “The Little Things That Give You Away,” from their forthcoming album, Songs of Experience. It’s always a treat to see U2 live. They’re nothing quite like singing along with 60,000+ other fans and worshipping at the Church of Bono.

Tagged as Bono, Gillette Stadium, Martin Richard, The Joshua Tree, The Lumineers, U2, Where The Streets Have No Name