Portland House of Music and Events

My friend Aimsel Ponti hosts the Music from 207 radio show on WCLZ. She’s been playing “I Couldn’t Be” by Portland’s SnugHouse regularly, and it hits me right in the feels. Aimsel also called “I Couldn’t Be” one of her favorite songs of 2017. I finally looked SnugHouse up, and have been listening to their songs nonstop for weeks now. Nikhil Dasgupta is the primary songwriter for SnugHouse, and we talked local music shop talk by email and he let me know they were playing at Portland House of Music and Events last night. I decided to stay up late on a school night and check them out live mostly to hear “Brunswick” live, but also because Nikhil is also a Bowdoin College alumnus and that makes us family. SnugHouse was excellent live. Put this band on your radar.

I am a person who likes context, so I read this band feature on Rawkus and listened to their Studio Z performance on WCLZ to learn a bit about where SnugHouse came from. In it, I learned that their name is derived from local Portland pub, The Snug. It’s also evident that SnugHouse has gone through a few lineup and genre changes, but they seem to have settled on their current folky vibe and the lineup of Nikhil Dasgupta, Alex Millan, Rosie Borden, and Laura Pauline. SnugHouse also played on 207 this week ahead of their show at PHOME.

I grabbed a quick dinner at El Rayo, and made it to PHOME with time to catch up with my concert friend and fellow Bowdoin alumna Ally and her roommate, Jill. I met them both this summer at The Head and The Heart’s show at Thompson’s Point, and Ally and I have run into each other at lots of shows since then already. I found a good spot to take some photos of the band, and I ended up chatting with Nikhil’s adorably proud dad, who’d driven up from Boston from the show and had Nikhil’s mom on FaceTime the whole night so she could watch the show. It was precious.

SnugHouse played a long opening set–over an hour, and the audience was hooked. Everyone in the band took the lead on at least one song, and most of them write songs for the band, too. This is a talented group of musicians–with soulful songwriting, multi instrumentalists, and rich, lovely harmonies. They are wise beyond their years.

SnugHouse played some incredibly well-received and creative covers, too–Bruce Springsteen’s “Thunder Road” and “Philadelphia,” the Bee Gees’ “Stayin’ Alive,” the Commodores’ “Easy,” and “I Can’t Make you Love Me.” I was so glad to hear “Brunswick” and “I Couldn’t Be” in person. I really liked the songs that Rosie and Alex wrote and took lead on, too, including the one that Alex wrote and the group performed on 207 earlier this week. 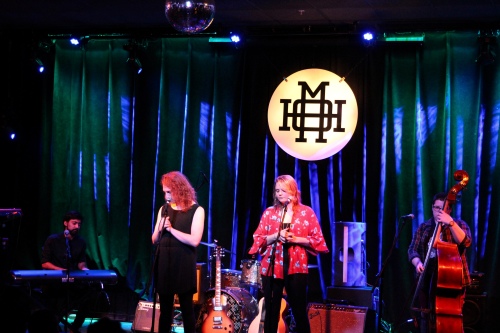 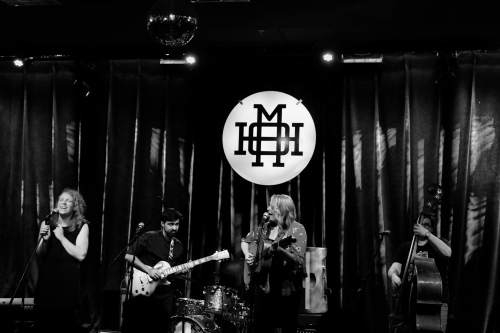 I chatted with Nikhil’s dad after the show for a while, and got to talk to both Nikhil and Alex for a while. This is a creative, talented group of musicians with many musical projects going, but I like the sound and vibe of this particular ensemble A LOT. Check them out!