There’s nothing quite like starting the weekend with not one, but two, of your favorite live acts! And, in this case, they played a show together!! This show was my dream double bill, and it was everything I knew it would be. I got a killer parking spot in front of PHOME right before 8pm. I love that seats were set up for us, because neither of these bands is putting out a dance album anytime soon (challenge accepted?!), and I got a second row spot a few minutes before my friend Max Garcia Conover took the stage. Sophie sat with me, and I was so glad to get to see her excited facial expressions as her husband put on a truly inspired show. Max came out of the gate with “Crow Song,” “My Neighbor Joe,” “Self Portrait,” “New Sweden,” and “Rich Man.” I find Max’s live show so compelling–he’s earnest and humble–a true storyteller. On this night, he played hard, sang loud, thumped his kickdrum, and had the crowd in the palm of his hand (as usual). 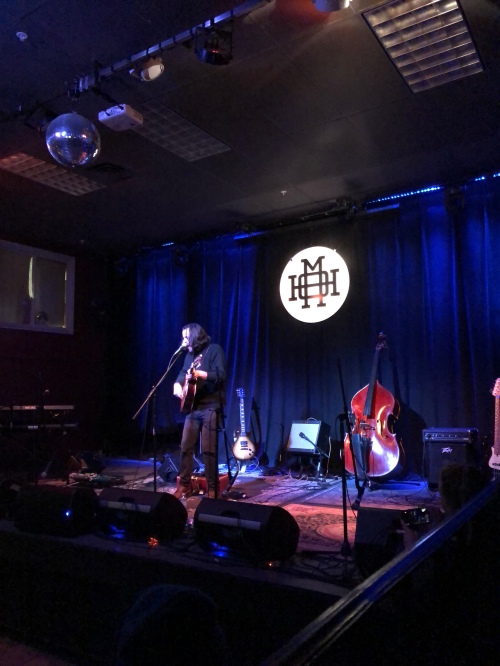 SnugHouse is such a delight. I love their shows because they’re a total lovefest. Nikhil Dasgupta, Alex Millan, Laura Pauline, Rosie Borden, and new-ish fifth member Sam Kyzivat have chemistry and talent to spare. They played virtually every song they’ve written in their short tenure as a group, including “I Couldn’t Be” (sung around one microphone), “Irie,” and “Glass” (from their 2018 EP, Like Water). Rosie brings an effervescence to stage that juxtaposes nicely with SnugHouse’s typically reflective songs. Rosie’s parents were in the audience and had driven up from Connecticut for the show. They were adorable and blew kisses to Rosie from their seats on the floor. Laura’s folks were there from Florida, and I chatted with Nikhil’s dad after the show. I told you that SnugHouse shows are full of love, and it’s not an exaggeration.

I really appreciate that everyone in SnugHouse shares the spotlight, writes their own songs, and plays multiple instruments, too. Laura debuted a new song she wrote at SnugHouse’s EP release show back in November called “A Love I’ve Never Had Before,” and I loved hearing it with a full arrangement. Her vocals on their covers of “Stayin’ Alive” and “Fever” are crazy impressive, too. The crowd was captivated and asked for an encore. I was hopeful when Nikhil sat down at the piano and said that they hadn’t played this song in a while. I wondered–could it be my favorite SnugHouse song–the one I’ve listened to seriously no fewer than 100 times?! He said that “it’s about having to say goodbye to a place when you’re not ready to” and then he scanned the crowd, saw me, and said “this song is dedicated to Bree” and I was so touched. “Brunswick” (Bowdoin’s my alma mater, too) shows the maturity of Nikhil’s lyrics. My favorite in this song–“So find my hand and walk me through the unfinished parts. Through my search for beginnings in the end, the truth that I can’t bend.” What a delight to hear that song in person for the first time and frankly it was an honor to hear my name mentioned from stage, too. Thanks so much for that surprise, Nikhil. SnugHouse–I love y’all so much. What you have created together is truly special.

I’m a big fan of Portland’s SnugHouse, and based on the love in the room at this near sell-out EP release show, many of you are, too. SnugHouse’s star has risen quickly in the year they’ve been a band. They played the WCLZ stage at the Old Port Festival in June, are played in regular rotation on Aimsel Ponti’s Music from 207 show on 98.9 WCLZ, and have been featured on 207 twice. If you somehow haven’t heard about SnugHouse yet, let me introduce you. Nikhil Dasgupta, Alex Millan, Laura Pauline, and Rosie Borden came together as solo artists and regulars at the open mic night at the Dogfish Bar in Portland. What they’ve created together is really special.

I was surprised to learn this was only my second SnugHouse show, because I like them so very much. I ran into Nikhil and Sam Kyzivat from Maine Youth Rock Orchestra a week earlier at a Mipso show at Portland House of Music and Events. Sam told me that he was joining SnugHouse on violin and keys for their upcoming tour, so I was even more excited for their Like Water EP release show at One Longfellow Square. I asked Dan to join me and he surprised me by making my favorite Indian dish and pakoras at home before the show. We made our way over to OLS and it was crowded when we got there at the end of the show opener’s set. We grabbed a front row balcony seat, and I got to say hello to Kevin Oates of MYRO and Geneviève Beaudoin (my delightful former student!) of Dead Gowns during intermission.

The energy in the room was supportive and warm. The audience was clearly full of friends, family, and fans, and the band obviously felt the love and were all smiles all night. They told us a bit about some of their songs, their recording process, and highlights from their EP release tour. I always appreciate storytelling on stage–it makes a show more of an experience. Something else I like about SnugHouse is that everyone in the band is a songwriter and multi-instrumentalist. They share the lead depending on who wrote the song they’re playing and move about the stage from instrument to instrument.

I thought their cover of “Fever” was fun and Laura debuted a new song she wrote called “A Love I’ve Never Had Before.” Laura told us that they didn’t have time to arrange it to play with the full band, so everyone cleared the stage while she sang and you could feel the positive energy her bandmates sent her way from the wings. It makes me happy to see a band that genuinely likes and supports one another. SnugHouse covered a sad, beautiful song by Donovan Woods called “I Ain’t Never Loved No One.” The original song features Rose Cousins, who is one of my top favorite artists.

Take a few minutes and check out SnugHouse. They’ve just put out videos for “Firefly” and “Glass” from Like Water.  They’re a treat in person.

This was my fifth Mipso show. Libby Rodenbough, who plays fiddle and sings in Mipso,  emailed me back in 2015 to invite me to their first-ever show in Maine at One Longfellow Square in Portland, and I’m so glad I went. I don’t think I’ve missed them in Portland since. They’re touring to support their brand new album, Edges Run. Dan really liked “Moonlight” from that album and has mentioned it a couple of times since the show. “People Change” is also from their new album and it’s so depressing, which is right up my alley. The lyrics– “I used to love you like the world would end. I used to love you like a child. The thing about people is that they change when they walk away.” Ugh. I love an honest lyric.

Mipso has an Americana, bluegrassy vibe, and I love their heartfelt songs and tight harmonies. Jacob Sharp (mandolin), Wood Robinson (upright bass), Joseph Terrell (lead vocal and guitar), and Libby Rodenbough (fiddle) met at UNC Chapel Hill and have been a band for about five years, but they play together like it’s been longer. They added Yan Westerlund on drums in 2017, too, which has amplified their sound. The most important thing to me about Mipso’s music is that their lyrics are crystal clear and are at the forefront of their songs. For me, lyrics are the most compelling reason to fall in love with a song. I especially like “When I’m Gone” and “Down in the River.” They also circled one microphone to cover Robyn’s “Call Your Girlfriend.” It was perfect and Dan and I have watched the video more than once in the few days since the show.

If Mipso isn’t on your radar, you’re missing out. Mipso IS on SnugHouse and Maine Youth Rock Orchestra’s radar. I saw both Nikhil Dasgupta and Sam Kyzivat at the show, and they’ll be celebrating the release of SnugHouse’s new EP, Like Water, together on Friday night (November 9) at One Longfellow Square. I will definitely be there, and you should come check them out, too!

Portland House of Music and Events

My friend Aimsel Ponti hosts the Music from 207 radio show on WCLZ. She’s been playing “I Couldn’t Be” by Portland’s SnugHouse regularly, and it hits me right in the feels. Aimsel also called “I Couldn’t Be” one of her favorite songs of 2017. I finally looked SnugHouse up, and have been listening to their songs nonstop for weeks now. Nikhil Dasgupta is the primary songwriter for SnugHouse, and we talked local music shop talk by email and he let me know they were playing at Portland House of Music and Events last night. I decided to stay up late on a school night and check them out live mostly to hear “Brunswick” live, but also because Nikhil is also a Bowdoin College alumnus and that makes us family. SnugHouse was excellent live. Put this band on your radar.

I am a person who likes context, so I read this band feature on Rawkus and listened to their Studio Z performance on WCLZ to learn a bit about where SnugHouse came from. In it, I learned that their name is derived from local Portland pub, The Snug. It’s also evident that SnugHouse has gone through a few lineup and genre changes, but they seem to have settled on their current folky vibe and the lineup of Nikhil Dasgupta, Alex Millan, Rosie Borden, and Laura Pauline. SnugHouse also played on 207 this week ahead of their show at PHOME.

I grabbed a quick dinner at El Rayo, and made it to PHOME with time to catch up with my concert friend and fellow Bowdoin alumna Ally and her roommate, Jill. I met them both this summer at The Head and The Heart’s show at Thompson’s Point, and Ally and I have run into each other at lots of shows since then already. I found a good spot to take some photos of the band, and I ended up chatting with Nikhil’s adorably proud dad, who’d driven up from Boston from the show and had Nikhil’s mom on FaceTime the whole night so she could watch the show. It was precious.

SnugHouse played a long opening set–over an hour, and the audience was hooked. Everyone in the band took the lead on at least one song, and most of them write songs for the band, too. This is a talented group of musicians–with soulful songwriting, multi instrumentalists, and rich, lovely harmonies. They are wise beyond their years.

SnugHouse played some incredibly well-received and creative covers, too–Bruce Springsteen’s “Thunder Road” and “Philadelphia,” the Bee Gees’ “Stayin’ Alive,” the Commodores’ “Easy,” and “I Can’t Make you Love Me.” I was so glad to hear “Brunswick” and “I Couldn’t Be” in person. I really liked the songs that Rosie and Alex wrote and took lead on, too, including the one that Alex wrote and the group performed on 207 earlier this week.

I chatted with Nikhil’s dad after the show for a while, and got to talk to both Nikhil and Alex for a while. This is a creative, talented group of musicians with many musical projects going, but I like the sound and vibe of this particular ensemble A LOT. Check them out!