I’m a big fan of Portland’s SnugHouse, and based on the love in the room at this near sell-out EP release show, many of you are, too. SnugHouse’s star has risen quickly in the year they’ve been a band. They played the WCLZ stage at the Old Port Festival in June, are played in regular rotation on Aimsel Ponti’s Music from 207 show on 98.9 WCLZ, and have been featured on 207 twice. If you somehow haven’t heard about SnugHouse yet, let me introduce you. Nikhil Dasgupta, Alex Millan, Laura Pauline, and Rosie Borden came together as solo artists and regulars at the open mic night at the Dogfish Bar in Portland. What they’ve created together is really special.

I was surprised to learn this was only my second SnugHouse show, because I like them so very much. I ran into Nikhil and Sam Kyzivat from Maine Youth Rock Orchestra a week earlier at a Mipso show at Portland House of Music and Events. Sam told me that he was joining SnugHouse on violin and keys for their upcoming tour, so I was even more excited for their Like Water EP release show at One Longfellow Square. I asked Dan to join me and he surprised me by making my favorite Indian dish and pakoras at home before the show. We made our way over to OLS and it was crowded when we got there at the end of the show opener’s set. We grabbed a front row balcony seat, and I got to say hello to Kevin Oates of MYRO and Geneviève Beaudoin (my delightful former student!) of Dead Gowns during intermission.

The energy in the room was supportive and warm. The audience was clearly full of friends, family, and fans, and the band obviously felt the love and were all smiles all night. They told us a bit about some of their songs, their recording process, and highlights from their EP release tour. I always appreciate storytelling on stage–it makes a show more of an experience. Something else I like about SnugHouse is that everyone in the band is a songwriter and multi-instrumentalist. They share the lead depending on who wrote the song they’re playing and move about the stage from instrument to instrument. 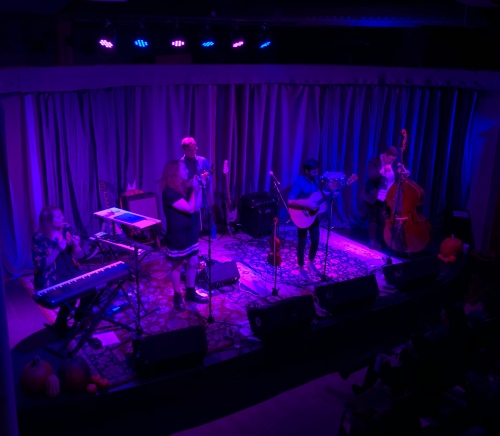 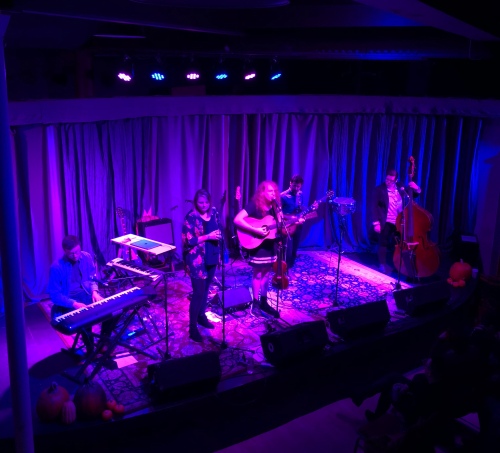 I thought their cover of “Fever” was fun and Laura debuted a new song she wrote called “A Love I’ve Never Had Before.” Laura told us that they didn’t have time to arrange it to play with the full band, so everyone cleared the stage while she sang and you could feel the positive energy her bandmates sent her way from the wings. It makes me happy to see a band that genuinely likes and supports one another. SnugHouse covered a sad, beautiful song by Donovan Woods called “I Ain’t Never Loved No One.” The original song features Rose Cousins, who is one of my top favorite artists.

Take a few minutes and check out SnugHouse. They’ve just put out videos for “Firefly” and “Glass” from Like Water.  They’re a treat in person.