Kacey Musgraves was just announced as an addition to the Newport Folk Festival lineup this summer. The Newport Festivals Foundation will be supporting her alma mater–Mineola High School in Texas–by purchasing new instruments for the band program there, too. Kacey said she grew up in a tiny Texas town at the show, and Google tells me that the population of Mineola was 4,515 in 2010, so she’s no liar.

I got to see Kacey Musgraves last week at State Theatre, and she was a delight. I went on faith–having only heard her song “Slow Burn,” but she’s received so many accolades for songwriting that I decided I needed to be there for what will surely be her first and only State Theatre show. The show was sold out because Kacey is already well-known in the country music world (I think? I wouldn’t know, really), but Sean and I both got half priced tickets on StubHub so we could be there.

Natalie Prass opened. She looked like Rainbow Brite in a pleather blue dress, and her band was all dress in blue, too. She told us she was from Richmond, Virginia, but has lived in Nashville for almost a decade and that she’d played the State Theatre twice before with other groups. I looked it up, and she’d been the keyboardist in Jenny Lewis’ band. Natalie worked the crowd and had spunk. I recognized “Short Court Style” from 98.9 WCLZ.

The break between acts was pretty long, and it was because Kacey’s staging was awesome. She took the stage dramatically by climbing up a staircase and suddenly appearing with a spotlight behind her while she opened with “Slow Burn.”The crowd went wild. Kacey is beautiful. She wore sequins. Her songs have heart and honesty and a spirit of inclusion. She kind of took me by surprise, because that’s not the vibe country music gives off. Kacey said as much when she introduced “Follow Your Arrow.” She said something like, “country music isn’t very inclusive, and I say ‘fuck that!’” She also thanked her band (who were dress all in maroon with turtlenecks and gold chains) and touring staff profusely for all of their hard work to “get the job done” and her fans for being there for her.

Kacey told us that Golden Hour, her 2018 album that won CMA’s Album of the Year, is all about falling in love with her husband, Ruston Kelly. WCLZ has also been playing his song, “Mockingbird,” and he’ll be opening for the incredible Patty Griffin at the Music Hall in Portsmouth on April 7. I already have my ticket, and am eager to see him live, too. “Butterflies” is certainly about their relationship.

The crowd sang “Merry Go ‘Round” together, and that and “Follow Your Arrow” were two of my favorites from the night. Both are from Kacey’s debut album, Same Trailer Different Park. I appreciate how she encourages people to be themselves and to ignore haters in “Follow Your Arrow,” singing–“If you can’t lose the weight/Then you’re just fat/But if you lose too much/Then you’re on crack/You’re damned if you do/And you’re damned if you don’t/So you might as well just do/Whatever you want.” That song was definitely a crowd favorite of the night, and Kacey ended her set with it right after a fabulous cover of “I Will Survive” that Natalie Prass sang with her. 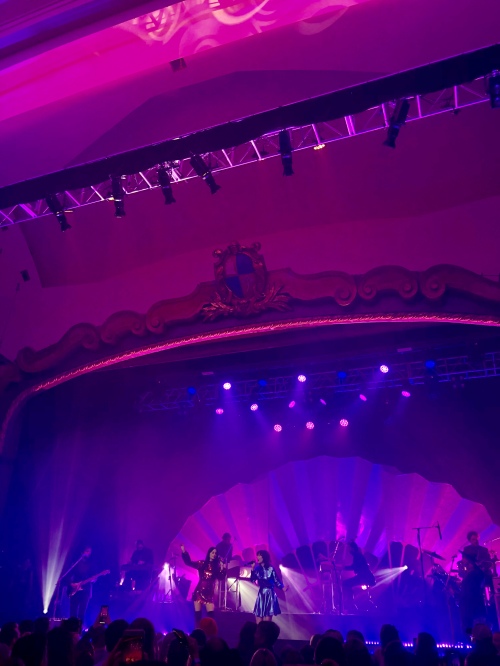 Kacey played a three-song encore, starting with “Rainbow,” which is gorgeous song. The lights changed and the room lit up in rainbow colors while everyone sang along to these lyrics–”But you’re stuck out in the same old storm again/You hold tight to your umbrella, darlin’ I’m just tryin’ to tell ya’That there’s always been a rainbow hangin’ over your head.” Did I mention that this was an uplifting show? It really was. She closed her encore set with “High Horse,” which is a favorite of mine from Golden Hour. 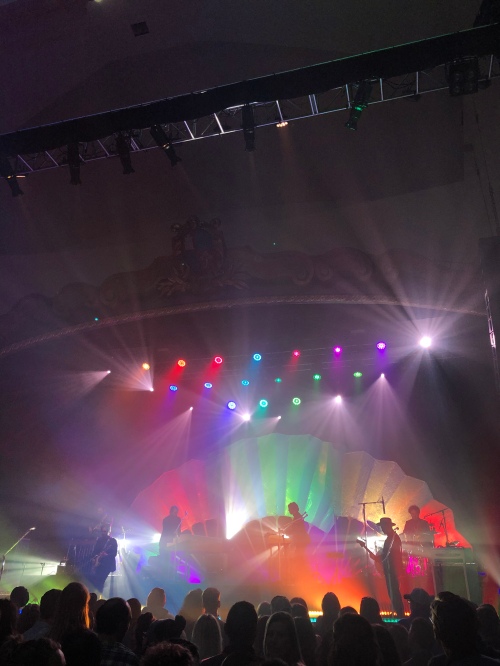 Writing this almost two weeks later, I’d almost forgotten about the drunk girls who took selfies and talked through the whole show who stood (inevitably) right in front of me and Sean! OH! And one of then cried for a while (not about the touching songs) while her friends consoled her. Concert goers–chat with your friends and cry your eyes out if you want–but do it in the back of the room!

Kacey’s already too famous to be playing a venue as intimate as the State Theatre, so I’m pumped I got to be in the room for this one!