This was such a lovely night of music. It’s been rare to see shows with a listening audience, but SPACE seems to draw the right folks who really care about the craft of songwriting. I was so pleased to be able to hear the whole show instead of it being drowned out by people treating the show as background noise. I attribute it, also, to the evident love folks in the crowd had for all three artists. So many people sang along and were really joyful all night. It was such a salve for the sadness show-going has brought me in the last couple of years. I’m glad my concert buddy Sean was there to witness it with me, too.

Fenne Lily didn’t introduce herself until the very end of her set, but I was curious about her from the first few bars of her first sad song. Her guitarist’s name is impressively hard to find online, but they were clearly great friends. Both on electric guitars, Fenne Lily’s songs were honest and she shared what inspired nearly all of them (which is solid gold for me at a show). She was charming and funny and I’ll definitely listen to more of her. I did see that she’s somewhat internet famous. Her song “Top to Toe” has over 30 million plays on Spotify. If you like context like I do, check out this interview with Fenne Lily. She complemented the audience last night. She said “thank you for being loud and quiet in the right places.” I totally agree. It was SO NICE to see a show surrounded by people who wanted to be there for the music. It’s becoming more and more rare these days.

Mal Blum took the stage and I had to quickly search my bag for my earplugs. They were LOUD, but in a captivating, well-oiled way. Mal introduced the band and told us they’re all great friends and grateful to get to make music and tour together. Mal told us “Things Still Left To Say” is about being closeted, and told us they got to have a “Lady and Tramp moment with a turtle” in the video. Mal’s music is about heavy subjects–identity, acceptance, loss–and I was so impressed by how open Mal was when introducing songs. Mal also had self-deprecating charm and self-awareness that I thought was really refreshing. I was also a little bit caught off guard (in a fun way) but how rocking these sad songs were. Folks loved their set and sang along a lot. There were clearly a lot of people in the room to cheer on this band. 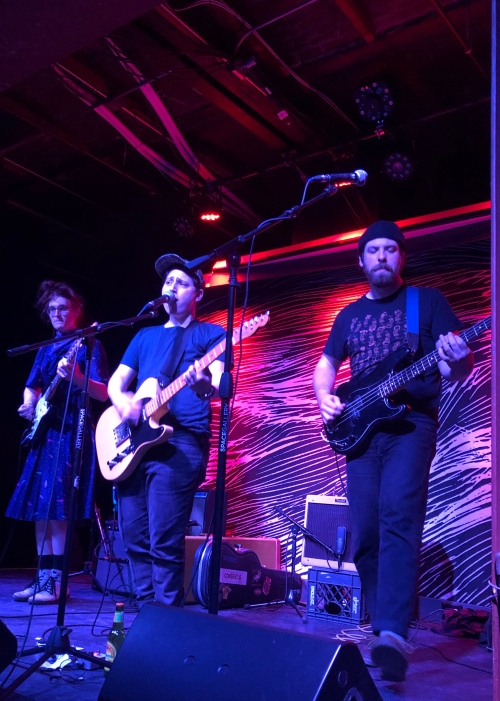 Lucy Dacus took the stage and opened with a new (beautiful) song, “Fool’s Gold.” Lucy really lit up the room with her heartfelt songs and humility. I was standing right in front of the drum kit, so I wished I could have heard her lyrics better, but we were entranced. I’m trying to figure out how someone who is 23 years old has her profound ability to capture emotion in lyrics. Lucy is really impressive. I was introduced to Lucy by her 2016 NPR Tiny Desk Concert and love her collaboration with Julien Baker and Phoebe Bridgers in boygenius.

Lucy asked if anyone had seen her play at One Longfellow Square back in 2016. She said a lot has changed in the few years since that self-booked show. Lucy and her band played songs about equally from her 2016 album, No Burden, and her 2018 album, Historian. Everyone in the crowd was super attentive and sang along. Her band stayed behind for her solo encore. She warned us that “if you wanted to leave on a high note, you might want to leave now” before playing another new song about a friend’s difficult relationship with her father that just floored me. It was such a pleasure to be in the room for this sold out show. Thanks, Lucy!