I was prepared to not like this show. In fact, I almost skipped it out of sheer frustration. I’d emailed back and forth with Maggie’s publicist about a press pass back in August for the originally scheduled November date at State Theatre. I reached out again closer to the rescheduled date in late February and got the runaround about a press pass and then a final no the week before the show. By then, the show was long sold out. I hadn’t wanted to take a ticket from a fan if I was going to be covering the show, so I didn’t buy one. I can say that I can’t remember a time I worked so hard to get a single ticket to a show. I ended up posting in every Facebook event related to the show and finally a real person messaged me and was selling a ticket AT COST. Two things–there were SO MANY fake Facebookers selling fake tickets in the Facebook event thread. If a person doesn’t have a single Facebook friend–they’re a scammer. Watch out! I connected with a real person who I have mutual friends with on Facebook and they wanted $100 for a single ticket. Bad concert karma to folks who jack up ticket prices! Dear Katia asked for $40 for a single ticket, which covered just the cost of the ticket and fees. Good on you and many, many thanks, Katia.

Saw so many friends at the show!

Turns out, I am so damn happy I worked so hard to find a ticket to this show. I know Maggie is coming back to Portland at the end of July to play Thompson’s Point, but I really hate that venue and have decided I just can’t have a quality concert experience there. It is simply too big a venue for me personally, especially when proximity to the stage is so important to me. Actually, I’d really love the opportunity to talk with the Thompson’s Point team about a trend of simply awful concert etiquette I’ve experienced there and see what we might do as a community to make shows better for everyone. The number of times I’ve been physically pushed at shows there, and often by women in their 50s telling me “it’s a concert!,” (which I found surprising at first), despite many clear statements to people to STOP TOUCHING ME is alarming. Many folks have such little regard for others at that venue particularly, and I just can’t enjoy a concert there anymore.

I digress. I won’t see you at Thompson’s Point, Maggie Rogers, but your electric, captivating, darling sold out show at State Theatre really *almost* makes me want to ditch my Thomspon’s Point boycott.

Maggie Rogers was pure delight. She came out ready to party in a silver shirt that shone all night like her smiling face. She grooved the entire show and worked every inch of the stage. She put on an excellent show, and I am so, so grateful that I had the opportunity to see her live. Sean and I snagged our favorite spot (it’s a secret) and had a great view of the stage. Everyone was so excited for the show and people danced and sang along and threw their hands up in the air during her 75-minute set. It had been awhile since I’d seen a show at State Theatre where concert etiquette wasn’t a huge issue for me. I suppose most folks this night were so into Maggie that they were too busy dancing and singing along to be awful, or, I just got lucky.

Maggie introduced a few of her songs with honest, open details, and seemed genuinely moved to be headlining the State Theatre, which she’d known from years of attending summer camp in Maine. She expressed sincere gratitude about waiting so long for the show and for being willing to reschedule. She thanked us “for being so understanding and for being so open about changing your plans–your hotels, your planes, your trains, your buses–so that I could go do Saturday Night Live.” It turns out, I was glad to see Maggie live for the first time after the release of her 2019 Heard It In A Past Life debut album, because we got to hear every single song from the album in person and had listened to it enough times through (on repeat in my car, at least) that we knew all of the words, too!

Sean lost his mind a little during Maggie’s cover of Taylor Swift’s “Tim McGraw” and he was coincidentally wearing a Taylor Swift shirt to the show! Maggie sang “Light On,” and told us it’s about graduating from college and figuring out adulthood. She said it recalls a “time when I was scared and overwhelmed. I got on stage every night and felt like I could be vulnerable and could share and I felt so supported doing this thing I love to do more than anything else in the world. SNL is part of the dreams you don’t stay out loud, but so is Thompson’s Point, and I can’t wait to be back here this summer.” Friends–I assure you–Maggie Rogers will kill it at Thompson’s Point. If you like the big venue thing, you should totally go see her there. 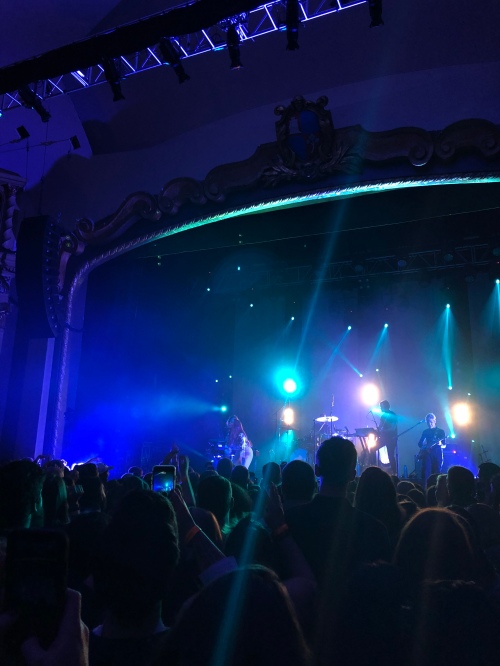 Maggie put on a hell of a show and she told us, “You can journal and you can go to therapy, but sometimes you just need to dance things off. I’m up here because singing makes me super happy, but it also gives me a lot of joy to help people release.” And it shows! I think Maggie closed with “Fallingwater,” and the crowd roared for an encore.

Maggie came back to the stage solo and spoke to us about how hard it’s been to fall asleep after the shows because “we create a lot of energy in this space together and being loud together is amazing. But I’ve been thinking a lot lately about being quiet with a group of people. I’m going to sing and it’s important to know it’s a camp song I grew up singing in Maine in the woods in the dark and it’s special to have my fellow campers’ blessing to sing it. There’s not really rules at concerts, but there’s like guidelines, and if you feel like yelling something, you should wait till after cause that’s rude (AMEN, Maggie!).” Maggie sang “Color Song” from her Maine summer camp a cappella for us to end the night, and I was so happily surprised when everyone in the room stopped to listen. Thanks for that wonderful moment, all!

This was such a happy show and I was so glad to be there. Also, State Theatre played “I Wanna Dance with Somebody (Who Loves Me)” just after the house lights went up, and it kept the good vibes going all the way out the door.