I’m grateful to Brandi Carlile for putting Courtney Marie Andrews on my radar. They toured together in 2018. When Brandi recommends an up-and-coming artist, I listen. I was so glad to see Courtney Marie Andrews was opening for Deer Tick at Port City Music Hall last week. I’m the senior class advisor and teaching a new course in American Foreign Policy this year, so I’m often short on time. Even so, I got myself down to Port City just in time to snag an available front row spot a few minutes before she took the stage. I knew I didn’t have the energy to stay up late for Deer Tick, so I drove 80 minutes round trip to see Courtney Marie Andrews play for 45 minutes. She was SO worth the effort! Do you ever feel that excited energy of knowing an awesome secret before other people? I feel like that with her, though I dug into her background a bit and was surprised to learn that she’s already been making music for over a decade. I am actually really late to the Courtney Marie Andrews party, but am here to invite you anyhow. 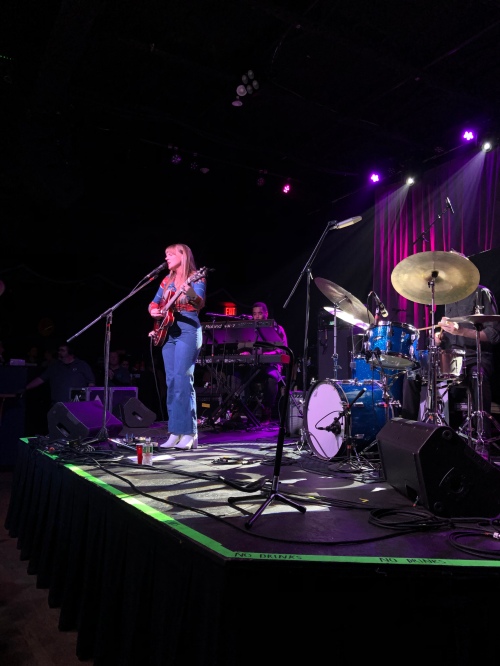 Originally from Phoenix, Arizona, Courtney Marie Andrews shared the stage with a drummer, bassist, and pianist. She played electric guitar and just stunned the room with her powerful lyrics and transcendent voice. The show was sold out and lots of people were clearly in the room ready for Deer Tick, but Courtney Marie Andrews held the crowd in the palm of her hand. Listen to “Rough Around the Edges” and “May Your Kindness Remain” to hear for yourself how powerful her voice is. If I had any wish for her live show, I’d (of course) want a bit more banter and to learn something about some of her songs in person. Even though she stuck almost exclusively to the songs, I was so blown away by her voice that I’d see her again in a heartbeat. Check out this live set and interview from KEXP for a bit of context about Courtney Marie Andrew’s background as a bartender and experience as a touring musician. Read NPR’s review of her 2018 album, May Your Kindness Remain, too. She’s the real deal, y’all.