I was so pumped for this show. I’ve been listening to country singer-songwriter Shakey Graves for a while now. I am not at all embarrassed to say that I first recognized Shakey Graves (Alejandro Rose-Garcia) from his role as “The Swede,” Julie’s summer crush at the pool on Friday Night Lights. That show was brilliant. Austin, Texas’ Shakey Graves (click here to learn of the origin of the moniker) is truly a one-man band. He has a beautifully raspy, yet perfectly clear voice. He masterfully plays finger picked electric guitar and percusses along with a kick drum fashioned out of an old suitcase all at once. I can’t successfully chew gum and walk at the same time, yet he can do all that. Color me impressed. Shakey Graves was super live. He has clearly developed his chops onstage and was at total ease and put on a great show. He joked that Maine’s like Texas because we like our beer and have guns in Maine, too. But, he added, Mainers can handle the cold better. He said he’d been to Maine before, but this was his first show here. I ran into some friends from Portland’s first-ever adult kickball league I played in, and my friend Paulie said about Shakey Graves, “He sure does make a lot of noise for one guy.” Yep. Really good noise. I promise. Listen to “Roll the Bones.” It will leave you wanting more. 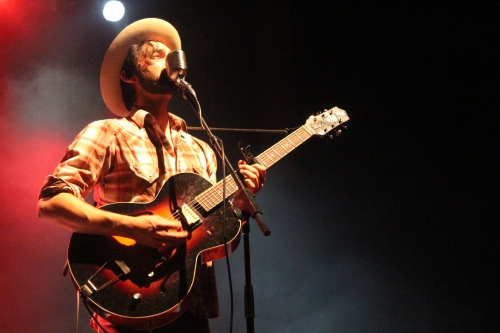 The Devil Makes Three is a bluegrass/rockabilly/Americana (wow, that was hard) trio out of Brattleboro, Vermont that had a loyal following in a very crowded State Theatre. I am quite used to seeing lots of bearded flannel-wearing men at shows in Maine, but this show took it to a new level. There was, however, the addition of a lot more folks in tie-dye with dread locks at this show. Everyone is clearly welcome at a TDM3 show—their music is diverse and appeals to a wide audience. I haven’t been around such a happy, dancing bunch at a show in a long while.

Pete Bernhard (guitar/lead vocals), Cooper McBean (guitar/banjo), and Lucia Turino (upright bass) of The Devil Makes Three are obviously great friends and have been playing together for a long while. I loved their energy on stage and the sideways smiles they sent to one another. They clearly love what they do, and that means something to the audience. 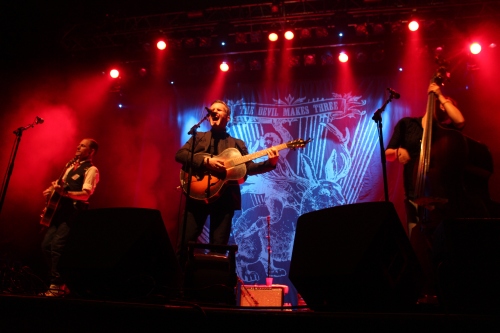 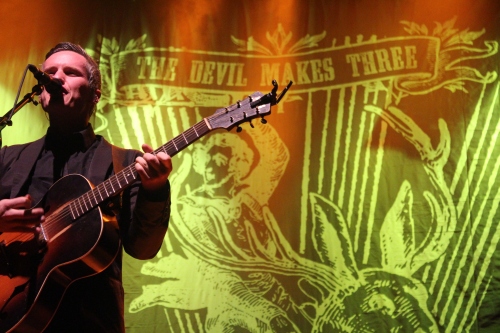 According to their website, TDM3’s most recent album, I’m A Stranger Here, is “part heartbreak songs and part barnburners.” I totally agree. People in the crowd were bouncing around dancing during the beginning of their set and I was impressed to see so much dancing even though there was no percussionist on stage. TDM3’s sound was so rhythmic that I didn’t really notice the absence of a percussionist until after the show.

I particularly liked “The Bullet.” I appreciated Cooper’s tribute to Woody Guthrie when he pulled out his banjo that had “This machine annoys fascists” written in marker on the face. “Spinning Like a Top” stood out, too. They covered Doc Watson’s “Walk On Boy.” “Hallelu” was fun.  I noticed that I preferred (and this comes as no surprise as I love an acoustic singer-songwriter sound) TDM3’s “heartbreak songs.” The rest of the crowd, I think, preferred the barnburners. I loved when they pulled one of the guys from their road crew out on stage to play fiddle on “A Moment’s Rest.” TDM3 played a solid set and I particularly loved their great harmonies. A good time was definitely had by all. While we were all dancing inside, Mother Earth was busy outside snowing for the first time this season. It was an extra long drive home on slippery roads, but worth the drive.

First real snow of the season!