*This is my 100th post on whatbreesees.com! Thanks so much for all of your support in the last (almost) two years!*

I was so excited to see Lucius again. Their website is ilovelucius.com, which is totally appropriate. I saw them over a year ago in Boston at Brighton Music Hall opening for Milo Greene and they were really unique and impressive. Mainers got to see Lucius this summer when they opened for Tegan and Sara at the State Theatre. Portland Press Herald’s Aimsel Ponti was so blown away by Lucius when they opened, that, for her, they stole the show. She called it “The Lucius Effect.” Their new album, Wildewoman, has taken off (check out this killer album review in Rolling Stone) and so the show was moved from its original venue to the larger Port City Music Hall.

My college friends Shaun, Harriet, and Atlee met me for dinner before the show at Empire. I rushed in to meet them after the best first date ever and was in very good spirits. They were over the moon about the duck buns I recommended. If you haven’t eaten at Empire yet, definitely check it out. Sweet Caroline got us out of the restaurant in plenty of time to grab our tickets and grab a spot up front. Naseem, Kingsley Flood’s lead singer, is our college classmate. I’d wanted to see them play this summer at The Newport Folk Festival (here’s their full NFF set), but I was marrying friends on top of a mountain at Sunday River that weekend. How exciting for Kingsley Flood that they’ve already played Newport!

With a decidedly folk-rock sound (emphasis on the rock), Kingsley Flood impressed with the fullness and variety of their sound. I especially liked their use of trumpet, saxophone, maracas, and tambourine. “Sigh A While” premiered on NPR’s All Songs Considered and was probably my favorite song of the night. I loved Janee’s intense and theatrical facial expressions and Naseem really left it all on stage (the pictures will prove it). If anything, I would have liked to hear a little more banter and background information about the songs because that’s really something I’m looking for at a show.

Naseem totally went for it 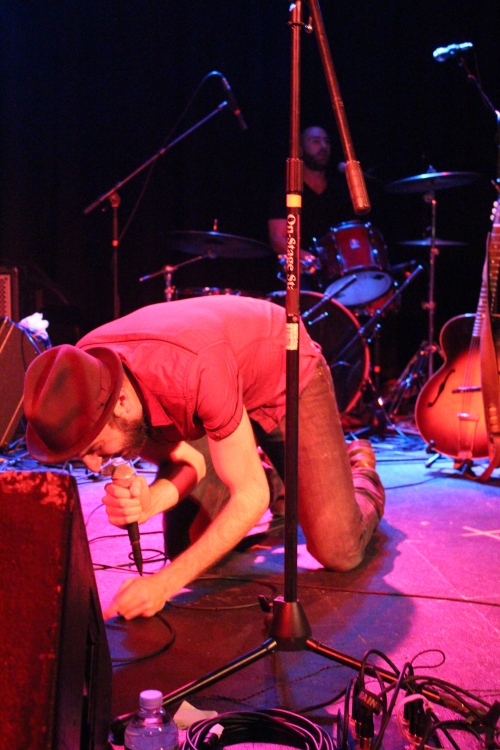 Travis Richter on drums is back there

Something I remembered seeing this summer that I think is very much worth sharing is that Kingsley Flood’s creative video for “Sun Gonna Lemme Shine” landed them a feature on the Huffington Post because it featured a little boy wearing a dress. Definitely check out the story and the video.

Brooklyn’s Lucius took the stage after a long break. I was immediately reminded of their unique 60s vintage style. I was so taken by all of the colors on stage that I ended up with hundreds more photos than I normally take at a show. It took forever (okay, a few days) to decide what photos to share in this post. I love context, so check out this New York Times interview with Jess and Holly of Lucius. 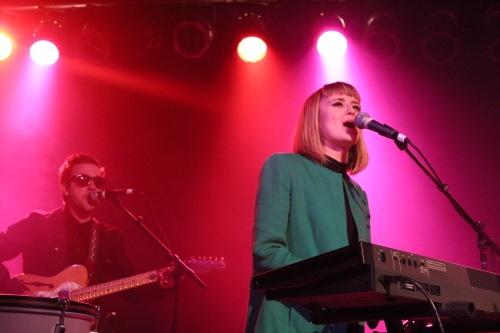 I was looking through my notes from the show and I essentially wrote the title of every song they played with a heart next to each one. My concert buddy Colin joined me for the show and I kept looking back at him to see his reaction. He was totally on board. I also met Megan in the front row who was such a dear. I love shows that bring good people together, and this was one of those nights. 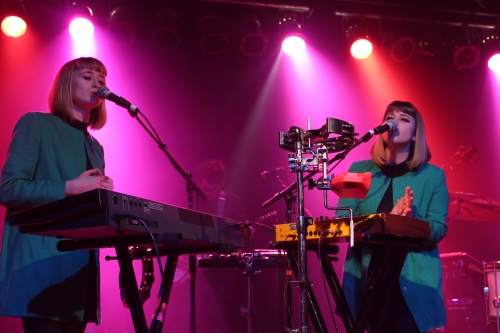 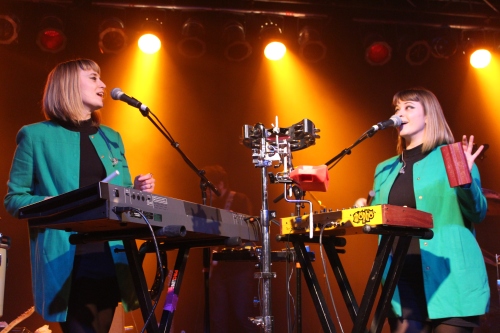 I love this sequence of photos and Holly and Jess’s playful facial expressions! 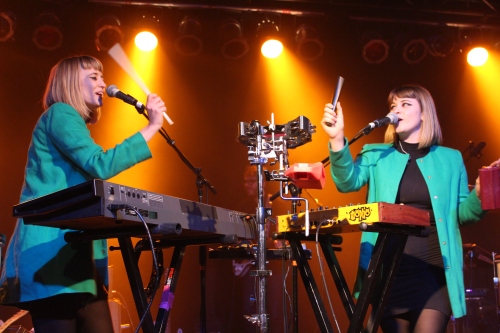 Lucius played a stellar, superb, strong set. I cannot say enough about the power and perfection of Jess Wolfe and Holly Laessig’s harmonies. I’m a big fan of “Don’t Just Sit There” and “Genevieve.” I really, really LOVED “How Loud Your Love Gets.” “Go Home” really shined, too. In my notes next to “Go Home” I wrote love, love, love!!!! So I guess I loved it?! Lucius wrapped their poppy set with “Wildewoman.” The crowd was so into their set from start to finish. From my vantage point, people were singing along—every single word. Drummer Dan Molad was so moved by our enthusiasm that he literally shouted out to us during the song with a huge smile on his face. This was one of those rare shows where a band said very little but I still felt like I knew them. Their music is a bit transcendent in that way. 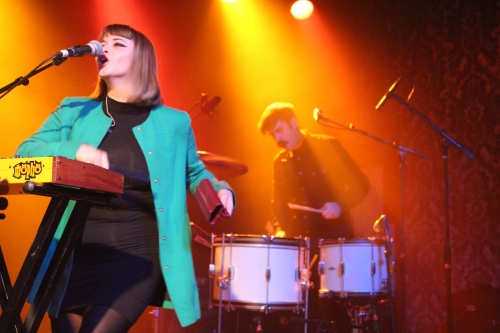 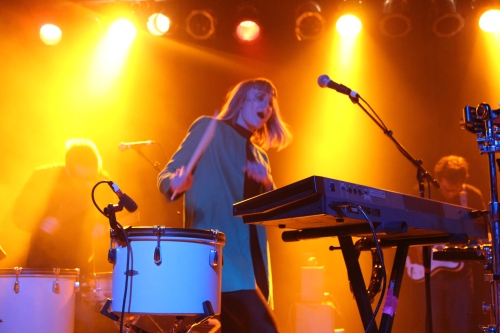 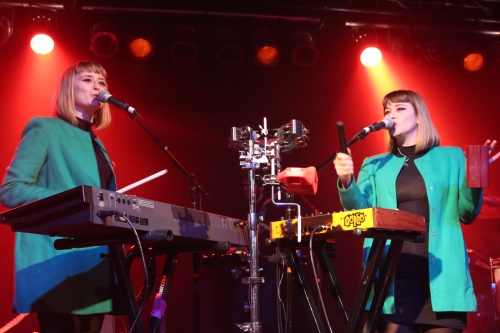 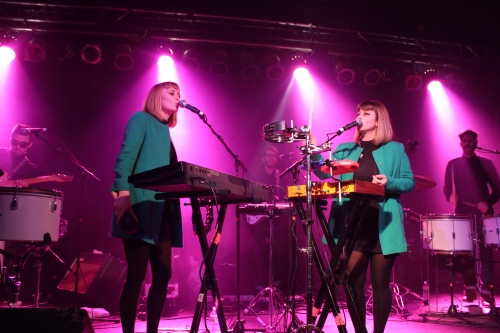 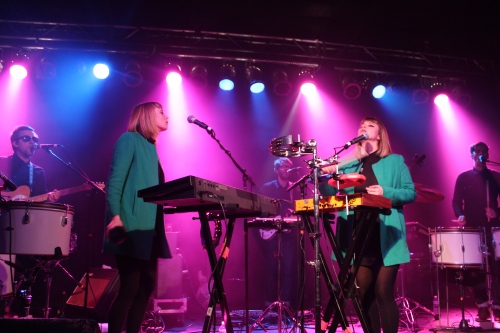 The crowd roared for an encore and Lucius happily obliged. Jess smiled and told us “you guys are too cute. You’re amazing.” I appreciated the joy of the audience and Lucius felt it, too. Heck, they created it. They sang “Turn It Around” for us, which is another of my favorite Lucius songs. I may or may not have been watching an episode of Grey’s Anatomy (an off and on guilty pleasure) sometime last season and heard “Turn It Around” as the opening song. Just as I thought they were going to say goodnight, Lucius stepped off stage and stood on milk crates that the bar dragged over for them to stand on in the center of the room and wowed with “Two Of Us On The Run” completely unplugged. They thanked us and said we’d made them feel at home. They left us with a cover of Paul McCartney’s “Goodbye” from the floor, a perfect way to say, well, goodbye. See Lucius live. I’m a teacher, so I can give you homework. 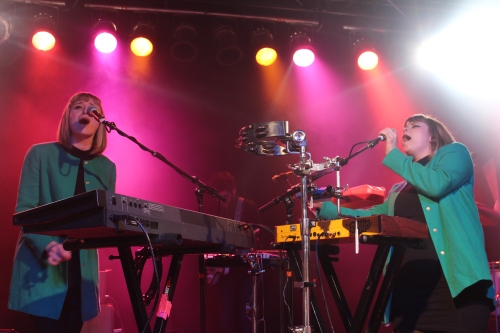 An encore from the floor