I hadn’t seen Ellis Paul in almost a year, so I was excited that my sweetie could take the night off and join me for his first Ellis Paul show (my 41st). When I tell people how many times I’ve seen Ellis live they tend to startle, but those are people who haven’t seen him live yet—or they’d know it’s actually a perfectly reasonable number.

Jeff and I got to Slates in Hallowell (just five miles from my house) in time for coffee and dessert and to settle into our front row seats. Ellis said hello to folks (a lot of familiar faces in the crowd for him, I’m sure) as he took the stage. He opened with “Chasing Beauty,” a song about a road trip he took in his sister’s Ford Pinto when he was 20. He joked about tattoos before playing “Rose Tattoo” and told us that his Woody Guthrie tattoo doesn’t look much like Woody since he got it decades ago. He suggested that tattoo artists show patrons age progression images of our tattoos before letting us actually commit to getting them. 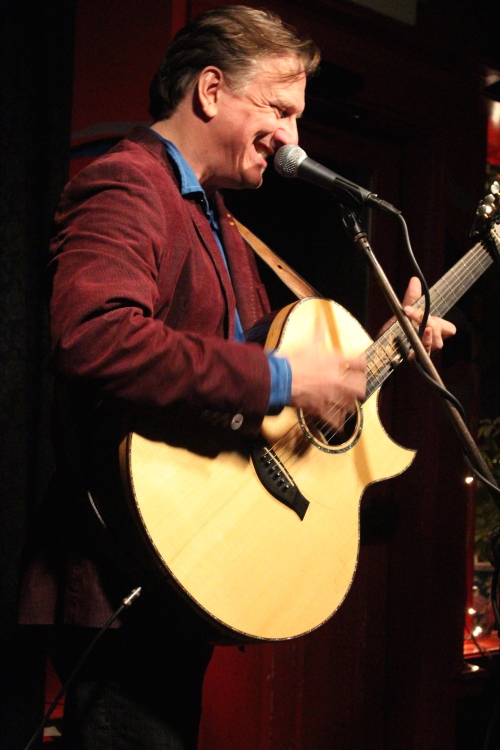 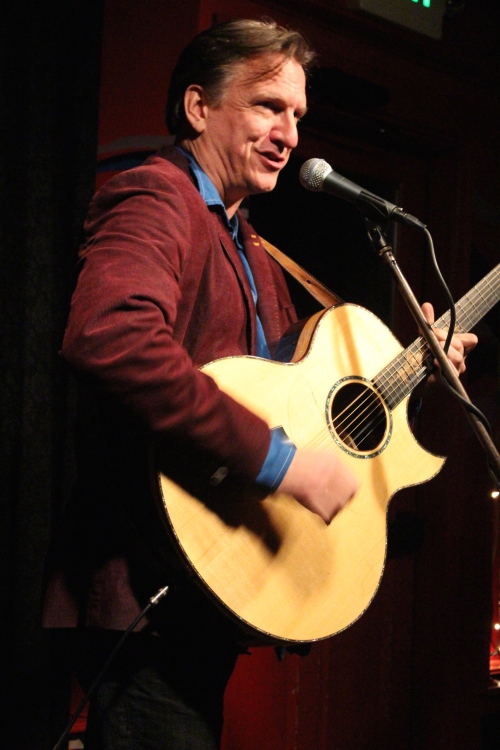 Ellis was chatty that night, and he talked at length about the surge in digital music and how sad it is we’ve lost music we can hold in our hands. He reminisced about how important it used to be to read the liner notes when we bought a new record, tape, or CD. He got home from a show in Texas where he rented a car with no CD player (those are almost gone, he lamented) and went straight home and bought his daughters a record player. He brought it to the show and played a Neil Young album on it. It was nice to hear the grit. Ellis’ newest fan-funded album, Chasing Beauty, will obviously come in LP as well. He’ll be doing a Concert Window show on Wednesday, May 28th at 8pm EST to celebrate the album release and will be playing songs live over the Internet from his home. 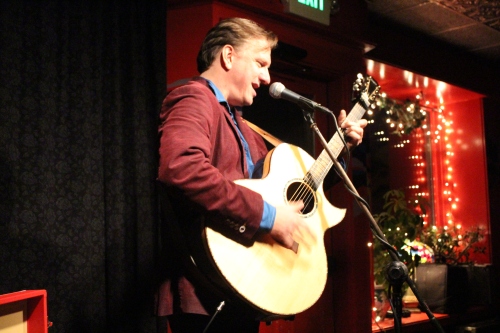 He told the hilarious story of his beautiful guitar Guinness and how Neil Young is a guitar dream crusher. It was exciting that Ellis played a new song for us—one he’d only played live the whole way through on guitar with vocals the day before. Did I write this lyric down right from that song? “Love—you’ve done me in.” I liked it. Even Ellis’ new songs seem tried and true. Jeff mentioned that to me after the show (which he really liked). He said Ellis’ songs felt “complete,” and added, “you know how a song sounds familiar even though you know you’ve never heard it before—that’s how I felt about Ellis’ songs.”

I really enjoyed hearing Ellis discuss his song about the Empire State Building. He talked about Arlo Guthrie’s hit “City of New Orleans” (written by Steve Goodman) in which the chorus is written from the perspective of the train. His song, “Empire State,” is written from the perspective of the building. The Empire State Building was built during the Great Depression. It had never occurred to me, but Ellis reminded us, that the poorest immigrants in our country built that extraordinary structure in less than two years for some of the richest people in our country. “Empire State” is the epitome of a folk song—loaded with social commentary and rich history. 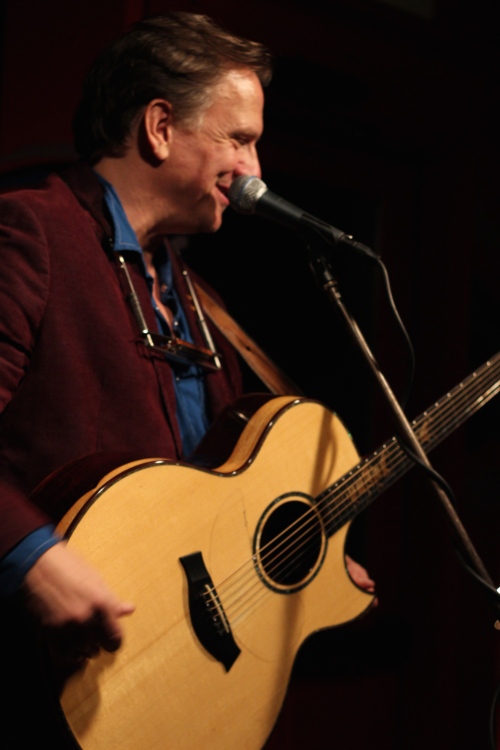 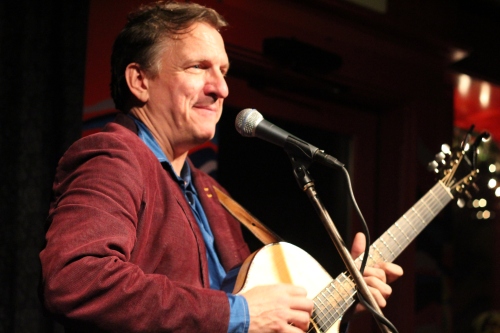 Ellis asked if we had any audience requests and played “Roll Away Bed” for us. He admitted that he was really the one in the relationship with the sleeping issues but says it was his girlfriend in the song. He joked that he ended up in a blanket burrito in the morning while she awoke without covers. The analytics from his website tell him that the number two thing people search that bring them to ellispaul.com is “roll away bed,” which is probably people really looking for portable beds, but he’ll take it.

Ellis gets a lot of letters from soldiers and has written songs about war and its aftermath. His newest is “Plastic Soldiers”—a protest song written with jazz chords. It was a real stand out that night. It’s startling and powerful without being preachy. The chorus goes “Come home soldier/Dinner’s getting colder/It’s time to put your toys away/Marching orders/Backyard borders/You will live to fight another day/Oh, put your plastic soldiers away.”

Ellis told us he was honored to be asked to be the commencement speaker in his homeland at University of Maine Presque Isle where he’ll receive an honorary doctorate next month. He’s also been asked to write their alma mater song. He reminisced about being young in 1982 and a state champion runner to boot. He said he got a hero’s welcome (with fire trucks and all) when he arrived home from competing and was given the key to the city when he was just 17 years old. Aroostook County has been good to him, he said.

Someone asked him to play “The World Ain’t Slowin’ Down,” which is featured in Me, Myself, and Irene starring Jim Carey. Apparently there’s a zombie version of it someone put up on YouTube and another version (among many) with a guy in a cowboy hat dancing all over London. It’s Ellis’ most commercially successful song with over 1.5 million hits on YouTube, but it’s earned him less than $4 in royalties. Apparently, he was recently asked to testify in Washington DC about music rights for singer-songwriters.

Ellis wrapped the show with “Kick Out the Lights”—a song about Johnny Cash kicking out the stage lights at the Grand Ole Opry. It’s a fun song with boisterous sing along parts for the men and women in the audience. It brought us all together to finish a great night. We asked for an encore and Ellis kindly obliged with “Snow in Austin”—a song about a long-distance relationship between two people living in Austin and Boston.

This Extended Play Session featuring Ellis on Alternate Route TV shows him discussing and playing a lot of newer songs. If you can’t make it out tomorrow night to see Ellis at the Camden Opera House, this might have to do until he’s back in town!

Thanks, Ellis! Looking forward to Chasing Beauty and show #42!