The Ballroom Thieves are a rock solid favorite band of mine and I’ve written about them a bunch on whatbreesees.com. I first saw The Ballroom Thieves open for The Lone Bellow in June of 2013 at The Sinclair in Cambridge, Massachusetts. The fact that I am in love with The Lone Bellow, but that I didn’t want The Thieves to rush their opening set, speaks volumes about how good they are. Their infectious, percussive, dynamic sound—with honest lyrics and gorgeous harmonies—makes them the full package.

I send an annual email to Mike Miclon, Executive Artistic Director of Gardiner’s historical Johnson Hall, with a list of my favorite acts I’d like to see perform a mere .2 miles from my house in the upcoming year. He fell in love with The Ballroom Thieves right away and reached out to book them for this great season of shows at Johnson Hall. Coming off their first performance at Newport Folk Festival, I wasn’t sure they’d take a gig in such a small town, but they did!

This abundantly talented Boston-based trio—Maine’s own Martin Earley (guitar/vocals), Calin Peters (cello/vocals), and Devin Mauch (percussion/vocals)—is simply made to play music together. This show coincided with their second anniversary as a group. It’s incredible to think how quickly they’ve become such a strong unit. Their first full-length album, A Wolf in the Doorway, beautifully captures their spirit, and their newest songs (a few of which they treated us to) continue to show their growth and evolving energy as a band. I like their music so much that it’s impossible to pick favorites, but I always appreciate getting to hear “Coward’s Son” (Martin’s folks were in the crowd and he reminded us it’s just a lyric) and “Bury Me Smiling” (featuring Calin on lead vocal) live. Devin sang lead on a fantastic cover of Frightened Rabbit’s “My Backwards Walk,” and it shined brightly as a highlight of the night, especially because I can’t recall ever hearing him take the lead vocal part before. I like the trend towards featuring each vocalist solo from time to time. Their beautiful blend makes it tricky to distinguish their individual voices, so getting to hear each one solo is a treat. 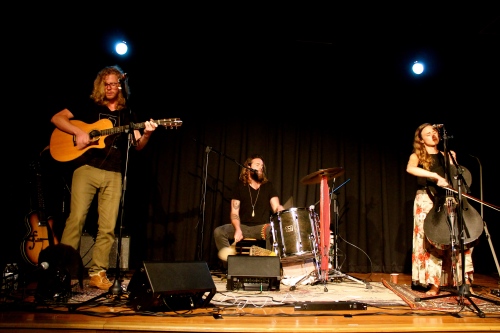 The Ballroom Thieves–Martin, Devin, and Calin 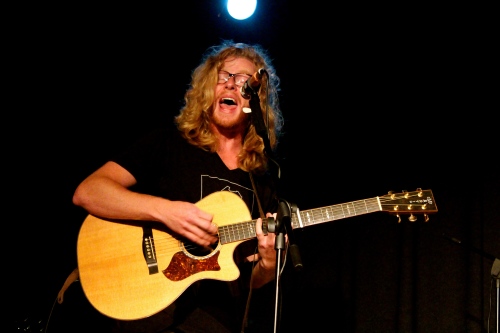 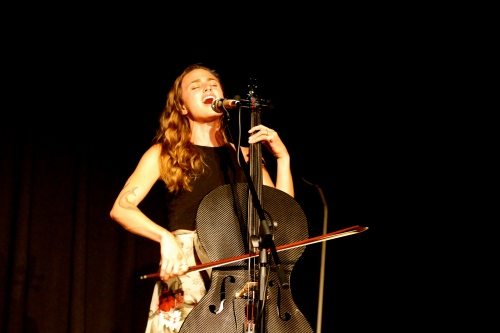 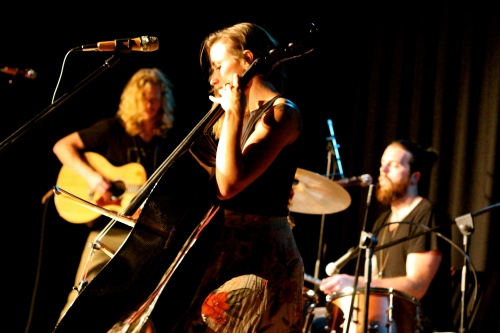 I appreciated that Mike gave me a shout out before introducing the band and credited me with getting The Ballroom Thieves to Gardiner. Although I rarely like to talk to musicians I admire (you never know when they might be having a bad day and it ruins the love you have), I enjoyed friendly banter during the show with all three, which was very kind. After the show, my sweetie pointed out that I chatted with the band enough during the show to be a fourth band member. Devin joked that he must have lost the invitation I sent for putting them up at my house for the night. Funny, because I had meant to send an email to their manager Eric extending an invitation to house them after the show, but I was so busy running Homecoming week at my school that it completely slipped my mind. Sorry, Thieves! You have an open invitation, both to return to Johnson Hall and to escape the van life for an evening at my house next time you come to town! More pictures below! 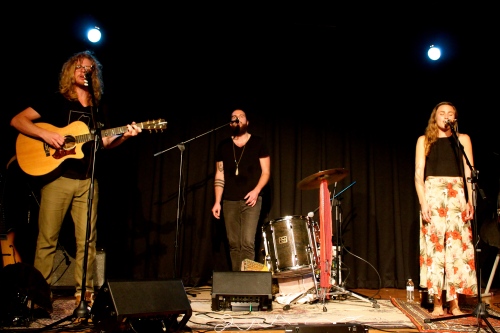 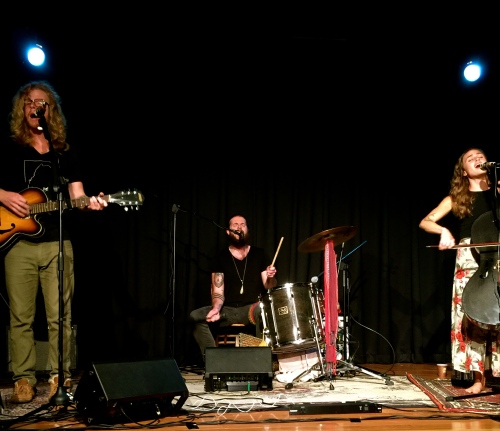 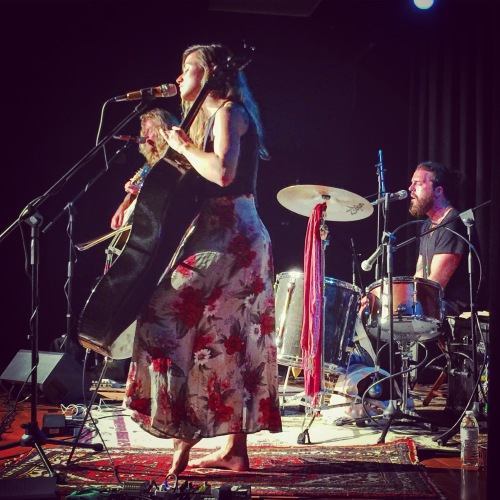 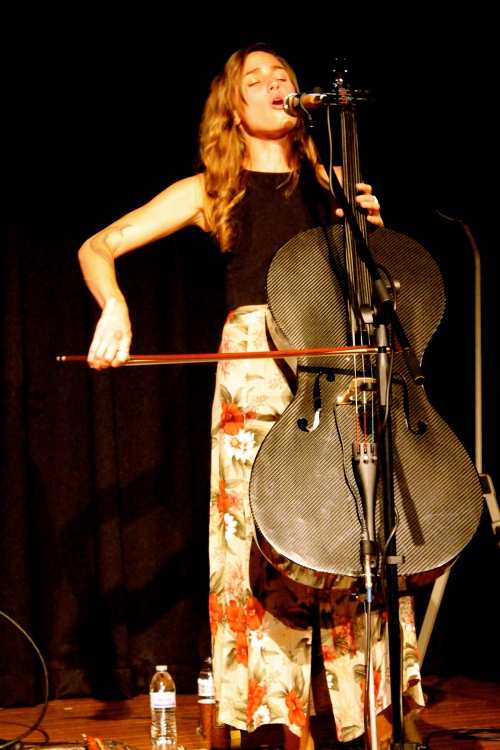 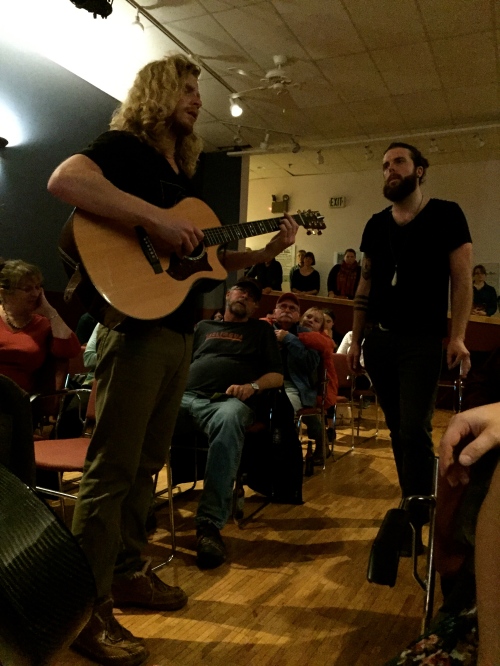 Unplugged encore on the floor 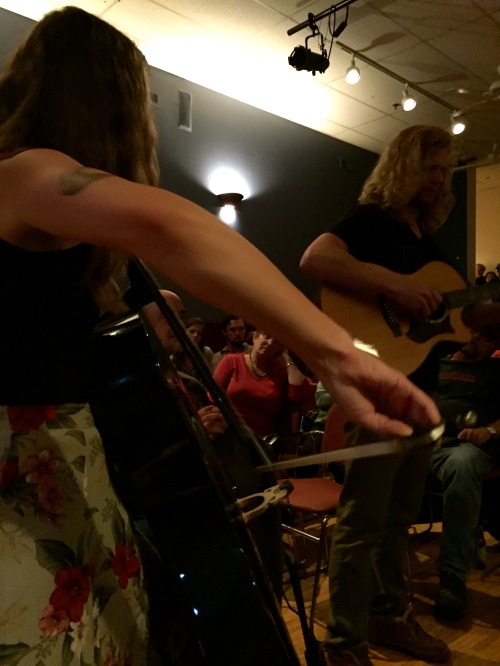 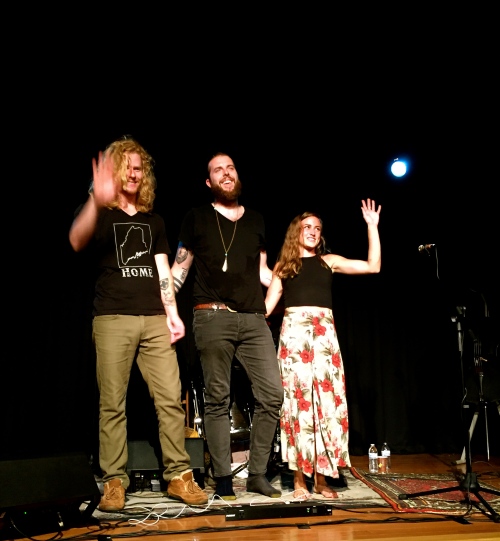