I saw David Ramirez for the first time a year and a half ago opening for Shakey Graves at the State Theatre in Portland. I was drawn to him immediately and enjoyed the sparseness of a man with a guitar juxtaposed with the urgency and passion he demonstrated with his powerful, rich voice. I sadly missed him a year ago at One Longfellow Square (I had tickets, but unfortunately didn’t make it to the show), so was eager to see him again. Colin went to that show a year ago and David played with a full band, which just isn’t really how I want to see him (or so I told myself, since I missed him). I was very excited to learn that I’d be seeing his 2016 Bootleg Tour–just David and a guitar–and each show would be recorded and audience members would get a link to a download of the show the next day. Right up my alley. Add that this was at teeny, intimate One Longfellow Square, and I was pumped.

I got to see my dear friend Fiona who was visiting from Minneapolis after school and then drove down to meet Colin at OLS. He snagged us great seats in the second row and we took in the living room scene assembled on stage–an area lamp, table, some books, and framed picture of Billy Murray–that gave us the feeling of really being in David Ramirez’s living room.

David Ramirez wowed with his incredibly powerful voice and honest lyrics. At some point in the show, it dawned on me that David is probably not the nicest guy in real life. There was a distracting woman sitting right behind us who responded loudly after each song. David would finish a song and she’d shout “yes!” (I forgot her other go-to responses) and then try to initiate a conversation with him in between songs. We get it,  you KNOW him! (WOW!) It was annoying, and I totally chuckled when David realized it was his friend in the crowd who kept making it about her (which it sadly became, at times). Etiquette tip–don’t be that girl. No one came to see you perform if you’re not the one on stage. When I said that to Colin after the show, he smiled at me and said “doesn’t he say as much in his songs?” Good point, Colin. I was especially glad to hear “The Bad Days” and “Harder to Lie” in person. 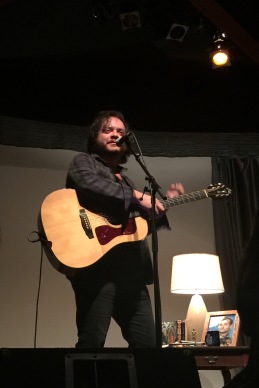 I will say, though, that even though David’s songs and stage banter mostly make him seem like a guy struggling to feed his healthy ego, he ended his set with “Find the Light,” which was a welcome surprise and an about face from his general tone. The song starts with some warm wishes–“I wish upon you peace/I wish upon you grace/I wish for less of what you want and more of what you need.” I’m so glad I went, even if David Ramirez is probably not someone I’d want to chat with or go have a beer with after the show. His voice and songs are layered and beautiful. And we’re all just learning how to be ourselves anyhow, and he seems to do that with his music, which is a healthy way to grow, I think.

I just realized that Spotify has David providing commentary about every song on his newest album Fables, which is right up my alley! Going to go listen now.