This was a perfect day. My 2019 class officers and I delivered hundreds of roses and carnations to kids at school, I had a decadent spa facial after school, and Colin met me at One Longfellow Square for this fantastic show. I hadn’t seenPortland songstress Monique Barrett in too long, so when I saw she was opening forLiz Longley, I eagerly added the show to my calendar. I am SO glad I was in the room for this stellar night.

Monique Barrett was charming and personal with the audience. I always appreciate when a musician interacts with the crowd by sharing stories behind the songs and making us feel like part of a concert experience. Monique does this so well. She played all of her songs about love for us in honor of Valentine’s Day, including a sweet song for her nephew Luca. Monique’s honesty shone through, and we laughed a lot together. Monique told us that she was first introduced to Liz Longley’s music when a friend asked her to learn Liz’s “When You’ve Got Trouble” to sing with her at her sister’s wedding. Monique said that her heart was so full in that moment, and she was honored both to have sung that song for a her friend’s sister on her wedding day and now to share the stage with Liz. She ended her lovely set with my favorite of her songs, “Make It Better.”

I’d somehow never seen Liz Longley before, but she impressed me in mere seconds. I remember leaning over to Colin maybe 30 seconds into her first song and whispering “I LOVE her!” Her voice is so strong and full that it fills the space that sometimes exists in songs by other singer songwriters. I was smitten right away. Liz told us she had to dig really deep into her catalog of songs to find any about love in a positive way. Most of her songs, and Monique’s too, were about love lost. She asked if anyone in the crowd wasn’t on a date. Colin and I raised our hands (were we the only ones?) and she looked at us and said, “so most of these songs are really for you.” I love a good break up song, so Liz’s music is firmly in my wheelhouse. 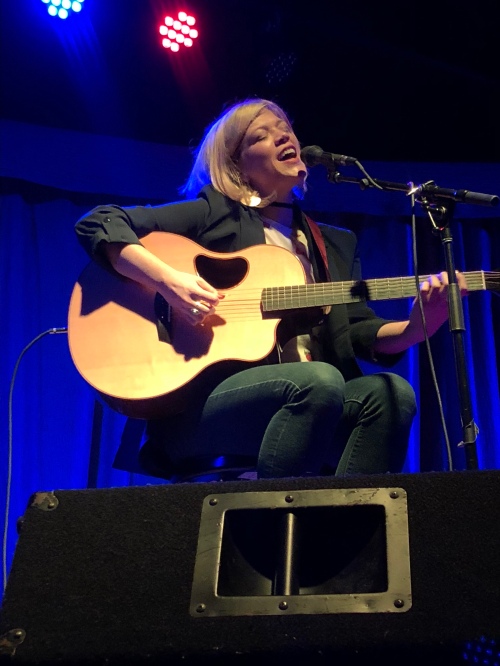 Liz told us that she just turned 30 and was a little freaked out about it, but the crowd reassured her life is better after 30. She wrote a song the day before our show in the car during her six hour drive, and told us that writing in the car can be liberating because she doesn’t getting get stuck in the structure of a guitar or piano part. She also told us that one of her favorite childhood memories was driving home from the Shore with her mom. Her mom used to sing while she drove to stay awake, and “I Will” by the Beatles was a favorite of her songs to sing. Liz sang a beautiful cover of it for us. 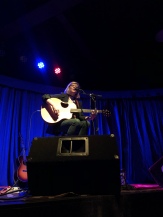 She introduced “Weightless”by telling us that she’d dated someone for three years and they ended up fighting over how to divide their stuff when they broke up even though they’d gotten it all off Craiglist because they were both poor musicians. The lyrics are personal and relatable:

“You can have the couch, the lamp, the diamond ring/the books on the shelf, the dishes in the sink/take take take take take everything.” She told us that she stopped writing music for almost a year afterwards.

I absolutely loved learning that“Rush” was written for Jim and Pam from The Office. Liz said she was watching the episode where they have their first kiss with the sound off, and the words came to her–“as we surrender to it all, have you ever felt so alive/as I feel with you tonight.” Liz told us that she studied songwriting at Berklee College of Music in Boston, and that’s when it clicked for me that I loved her honest, personal, hard hitting lyrics as much as I loved her voice. I realized as I wrote this that I don’t often quote song lyrics, but that’s an area where Liz shines. “Memphis” just slays–“The skies aren’t clear and you’re not here/so I just keep telling myself/you wouldn’t make it to Memphis/you wouldn’t make it halfway/you take that lonely road/and you realize your mistake.”

I read up on Liz after this show, and I listened to her entire musical catalog. She lives in Nashville and makes her living as a musician. I spent some of the night trying to figure out who she sounds like, but she sang the first line to a song I can’t find the name of–the lyrics were “Late in September when autumn came”–and it occurred to me that she sounds like Joy Williams (formerly of The Civil Wars), which is a sincere compliment.

Liz played the first song of hers I ever heard, “When You’ve Got Trouble,”and I was so glad to hear it in person. She joked with us all night–she’s pretty self-deprecating, actually–and told us that she was drunk shopping on Amazon years ago and bought some rollerblades. Turns out, she loves them, and bought another pair for her 30th birthday. She laughed as she told us, “if you need to spice up your life, buy rollerblades!”

Liz earned the standing ovation she received, and she kindly closed the night with an encore–a cover of the Alternate Routes’ “Nothing More.” She played a Concert Window show a couple of months ago to raise money for Hurricane Harvey relief, and attributed the night’s success (they raised $3,500 for hurricane victims) to that song, “because it brings people together, which we need in these times.” I couldn’t agree more.

This was a special night. I felt lucky to be there. I hope you’ll look up both of these talented women and see them live.