This was a picture perfect day. Friends from church invited me to join them for a sail out of Georgetown and Captain Ben even let me take the helm some. It was a hot and sunny day with good wind and great company. Meg and Ben kindly accommodated my need to get back to shore by 4 so I could scoot to Portland to pick up moving boxes I’d found for free on Craigslist (I bought a house!) and make my way to Prescott Park in Portsmouth to see I’m With Her.

I’d seen Sara Watkins, Sarah Jarosz, and Aoife O’Donovan all live, but never together. I’m With Her released their debut album, See You Around, in February of 2018, and I had never listened to it and didn’t know a single one of their songs as a trio. Their other projects were so strong and I love all of their individual voices enough that I got off a sailboat to drive 100 minutes each way to see them in person. 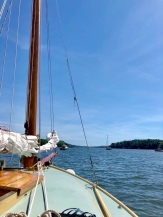 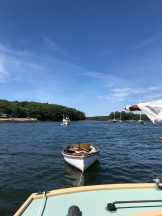 Colin and Sabrina arrived at Prescott Park closer to doors opening and put down a blanket third row center for us (they’re the best!), and I got to catch up with them about their upcoming trip to Canada a bit before the show. I thought Sara, Sarah, and Aoife’s harmonies were lovely, and they told us the backstories to many of their songs, which is always a plus in my book. They’re all talented instrumentalists, too, and played a soothing set juxtaposed with a very busy Seussical set.

Sarah told us that they wrote their songs for their album in Vermont in December. They’d rented a minivan to drive from New York to Vermont, lost cell reception, got rerouted by Google, and were stuck on an icy mountain, unable to move. Sarah said that “a magical mountain man in a pickup truck” helped them turn around and led them back to the highway. The bonus was that they got a song out of it aptly titled “I-89.” Their songs “Hundred Miles” and “Overland” also stuck out as favorites.

I’m With Her also played two incredible and well-received covers of Adele’s “Send My Love (To Your New Lover)” and John Hiatt’s “Crossing Muddy Waters.” I’m With Her will play the State Theatre in Portland on November 11, and a duo that I really like, The Brother Brothers, will open the show. If you like tender songs and strong harmonies, you should check them out!