When Dan and I started dating, he surprised me with a mix CD of some of his favorite songs because he knows how important music is in my life and wanted me to get to know him better through the songs he loves. I melted. My huge music collection lives on a hard-to-access hard drive, so I reciprocated by buying him The Lone Bellow’s first CD from 2013. A week later, he joked with me, “I just want to tell them it’s going to be okay.” I explained the inspiration for those first songs, and then he understood. He picks on me for liking sad songs so much, and we joke that the more unplugged, the fewer percussive instruments, and the more harmonies there are, the more I’ll love a show. He’s not wrong. So when I saw that The Lone Bellow was going to leave the band behind (sorry, Jason!) and tour with just Zach, Kanene, and Brian, I was pumped. I wanted to win Dan over about The Lone Bellow (because they’re my favorite band), so I asked him to join me to see their TRIIO tour at The Music Hall in Portsmouth, New Hampshire. I haven’t seen as many concerts lately because I’m dating someone entrenched in the theater world–we saw 5 shows last month alone–so I was really glad to share an important part of my music world with Dan. I promised him that The Lone Bellow give 110% live and that I was positive he’d love them. I was totally right!

We had a leisurely dinner across the street at The Friendly Toast before the show, but still made it to our seats (my first time in the balcony at The Music Hall) in time for show opener Naia Izumi. I watched his NPR Tiny Desk Concert after he was named 2018 Tiny Desk Concert winner, and am always hopeful that I’ll love an opening act. I was not so lucky this night, however. Naia sat down and played a handful of songs for us. He lacked interest and energy in the performance. I was surprised and disappointed.

Zach, Brian, and Kanene took the stage a while later and the house had pretty much filled in by then. I think they’re mesmerizing, passionate, and generous live–truly the very best a band can be in person. I loved hearing them tell stories, trade instruments, cover Buffalo Springfield’s “For What It’s Worth” and The National’s “Pink Rabbits,” and impromptuly sing some of  “If Tomorrow Never Comes,” too. “Pink Rabbits” is on The Lone Bellow’s new Restless EP. 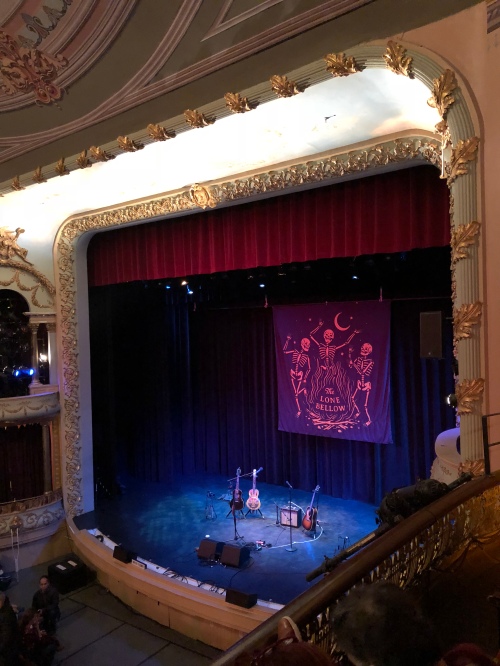 I think “Watch Over Us” is always going to be so stunning live that I catch myself holding my breath every single time. Zach told us the sweetest story about his daughters getting the idea they wanted to build a treehouse the day before he left for tour for three weeks. He and his wife wondered if their friend (and fellow Nashville musician) Hugh Masterson might be able to price out how much one would cost, and, without them knowing, their daughter called him to ask him to come over to do an estimate. Zach told us that his wife sent him a photo of Hugh and their friend Micah out in the backyard building his family a treehouse. He was stunned when he told us, “they built my children a treehouse. They are fellas with jobs, too. I feel so loved by my neighbors and I hope you’ll get to know your neighbors.” I took a couple of screenshots of the treehouse in progress from Zach’s Instagram account to share with you. There so much love in this, and we need it. 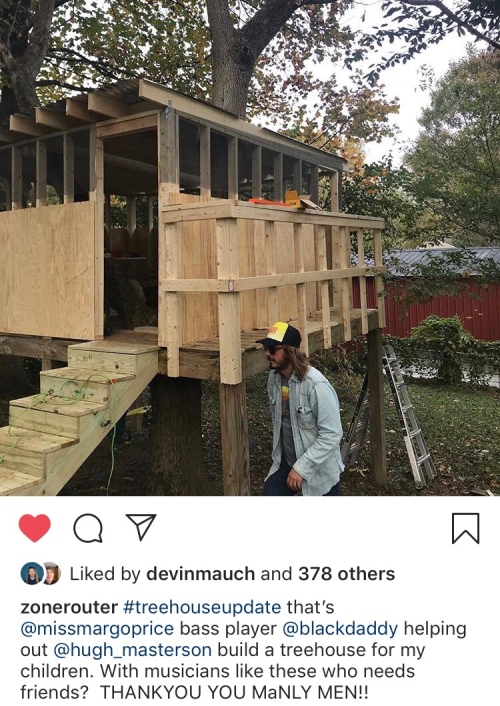 In the next breath, Zach told us what I’m going to call his “nipple story.” He told us that he went on a long run earlier in the day. He joked that “I think I went to Maine.” He’d been wearing the same shirt for several days in a row, and his nipples started to chafe. He hurt so bad that he went to a running store in Portsmouth and whispered to a sales associate about his chafed nipples. They were out of the nipple stickers, so the sales guy called another store to get some for him. Before Zach left, the sales associate said to him “by the way, I’m really looking forward to the show tonight!” I love how small our world is.

I think they wrapped up a 15 or so song set with “May You Be Well,” which has such hopeful lyrics–”Whatever darkness/That you are concerned with/May you find peace/That is everlasting/Even when circumstances/They are crashing/Oh you can stand firm on the everlasting/May you be well.” It’s a lovely sentiment to end a show with, but The Lone Bellow came back for two more songs, “Tree to Grow” and “Green Eyes and Heart of Gold.” It really lifted my spirit to hear these three songs back to back. “Tree to Grow” is a top favorite Lone Bellow song, will the reassuring refrain “I’ll never leave, I’ll always stay/I swear on all that I keep safe.” I loved singing that line with them. Zach, Brian, and Kanene unplugged and climbed off stage and sang “Green Eyes and Heart of Gold” from the floor. I don’t think there’s a better feeling than hearing your favorite band sing “Our song is not a dying dream/You’re not alone, you’re not alone” at the end of a heartfelt night of connection through song. I love them so much, and if you still don’t know them, I know you would, too.