This was my third Iron & Wine show. My first was way back in 2011. I met Bob that night and we’ve been concert friends ever since. We were both at the last Iron & Wine show in Maine back in 2013 at the State Theatre, and together again earlier this week to see them again. It had been a while! Dan jokes that my favorite musicians are all sad singer-songwriters with guitars, and he’s not wrong. I’d obviously rather see Sam Beam live solo with just a guitar, but he seems to tour with a sizeable backing band all the time. This tour, he is joined by Helen Gillet on cello, Eliza Hardy Jones on piano and backing vocals, Elizabeth Goodfellow on percussion and backing vocals, and Sebastian Steinberg on bass. I think Sam had 10 musicians with him on stage last time, too, so he always brings a full band to round out his sound. 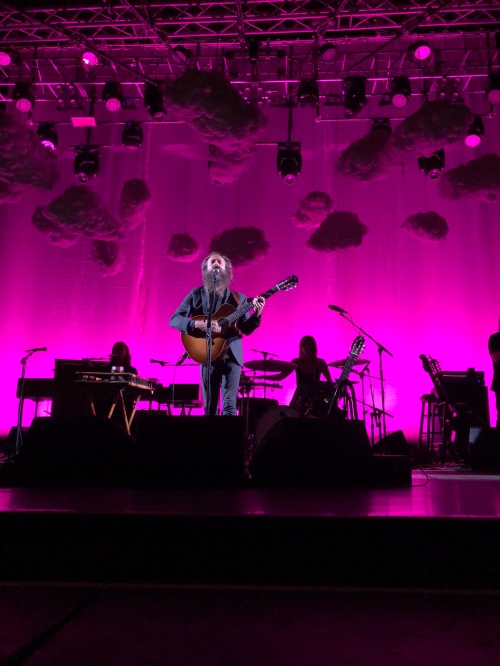 Sam played a nice variety of his songs from maybe 10 or so of his recordings, with the most songs coming from his 2017 release, Beast Epic. I was surprised and happy to hear “The Trapeze Swinger” so early in his set. Sam doesn’t really like to talk on stage–his banter game is pretty weak with lots of “you guys are great!” and “Thanks, Portland!” moments–so I guess his storytelling is entrenched in his songs. He also sacrifices audience interaction to play as many songs as possible. I think he played 25 songs the last time we saw him and probably 20 at this show. 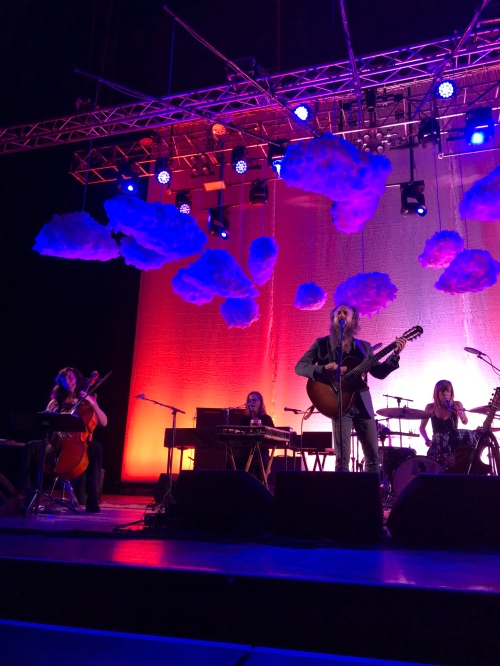 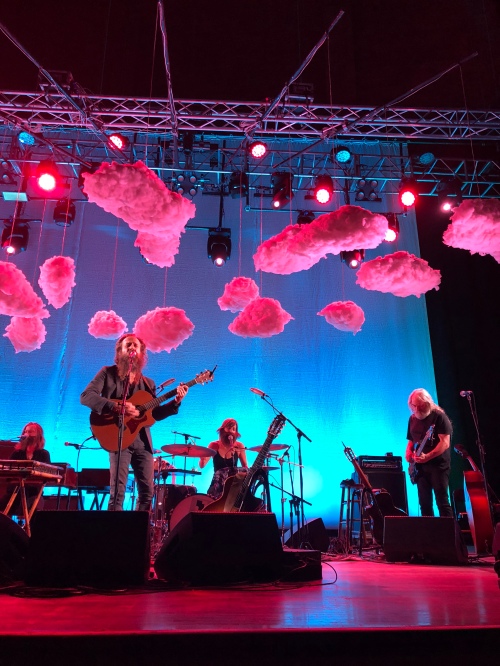 Sam did make my solo Sam dreams come true for two songs midway through his set when he played “Naked as We Came” and his well-known cover of The Flaming Lips’ “Waitin’ for a Superman” solo. Something I noticed about then is just how quiet and attentive the crowd at the State Theatre was. That’s rare, especially in the last few years. Sam commented a number of times that we were “so well behaved,” and we were. Rude audiences have ruined a ton of show experiences for me in the last few years, so I especially appreciated how attentive everyone was. If you’re curious about what NOT to do at a show, check this out and spread the word!

I was also spoiled by Bob (who’d been first to arrive outside State Theatre much earlier that afternoon for the show) who saved a front row center spot along the barricade for me. People up front are usually at shows to listen, and it was also great not to get pushed around by folks after the opening set trying to push their way to the front, which happens a ton, too. A+ for audience concert etiquette, y’all! Thank you!

I quite liked “Call It Dreaming” from Beast Epic. The stage was also a beautiful, simple set of almost 20 fluffy clouds and a pretty light show. Sam closed with “Boy With a Coin” and came back for an encore and played “Claim Your Ghost.” If all of my Iron & Wine dreams had come true, I also would have heard “Flightless Bird, American Mouth” and “Walking Far From Home,” but I was so pleased with the crowd, the set, and the band that it would be selfish to wish for more.