This was such an excellent Saturday! I spent part of the day volunteering at Johnson Hall Performing Arts Center’s Festival of Trees in Gardiner (I’m on the Board of Directors), enjoyed Gardiner’s Parade of Lights down Water Street from the second story window, and made my way to One Longfellow Square where my steadfast concert buddy, Colin, kindly saved me a front row seat for the show. 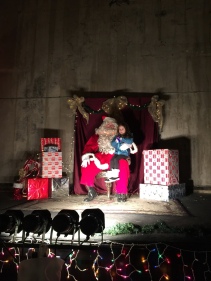 I love seeing folk singer-songwriter Lucy Kaplansky live. She is consistently warm and open with the audience, and seeing her in person feels intimate–like sitting around together in her living room. I first saw Lucy open for Ellis Paul back in 2007, and have seen her maybe ten times since then. I always look forward to hearing updates about her beloved husband, daughter Molly, and Janie the beagle, and it feels a bit like catching up with an old friend. Lucy writes songs about her life, and I’m humbled when songwriters are so willing to share their life experiences with strangers.

One of the things I appreciate most about Lucy is how much she loves and respects her daughter Molly. She played a bittersweet song on mandolin about how fast her daughter is growing up. Lucy told us she’d be happy to play our requests, and even if she hadn’t played the songs we requested in ages, she still gave them her best shot. Someone asked her to play “This is Mine,” and she told us it was a poem her husband Richard Litvan had written for her. When she finished, she said, “and that’s why I love my husband so much.” She also played “Ten Year Night,” which is also about him.

One of the things that makes a concert a true concert experience is when artists discuss the inspiration for their songs. Lucy never disappoints in this area. This time, I learned about her song “Don’t Mind Me.” Her daughter Molly had been assigned to read a book by Sherman Alexie last year, and Lucy told her, “I know him.” Best known for his film, Smoke Signals, Alexie ended up coming backstage to meet Lucy, Dar Williams, and Richard Shindell after a Cry Cry Cry show twenty years ago in Seattle. They hit it off, and he asked them to write a song for a particular scene in a movie he was writing and directing. He told them to think “Hopelessly Devoted to You,” but with Joni Mitchell singing it. Dar gave it a shot and wrote “I Won’t Be Your Yoko Ono” and Lucy and her husband co-wrote “Don’t Mind Me.” Alexie liked it so much that he wrote Lucy into the movie to play herself as a street singer. The movie didn’t end up getting made, but Lucy did get the song out of it.

I follow Lucy on Facebook, so I see a lot of pictures of her beloved dog, Janie. Janie is Lucy’s first dog ever. Her mom had been afraid of dogs, so she grew up without them. Lucy’s daughter kept asking for a dog, and they finally said yes. Lucy said, “it was a revelation to me that I could fall in love with a dog. I have at least a hundred photos on my phone of her if you want to see her after the show.” She wrote a very sweet song for her NYC dog and their “Everyday Street.”

Lucy’s dad, Irving Kaplansky, was a mathematician, a professor, and a musician, and Lucy sang one of his quirky songs, “On an Asteroid with You,” about honeymooning in outer space for us, as well. She’s also recorded an album of his songs aptly titled Kaplansky Sings Kaplansky. You can only get that EP at her shows.

Lucy told us about another audience requested song, “Manhattan Moon,” as well. She’d worked on a song for months, but it wasn’t right, so she sadly threw it away. She took a few of the best lines from that song, though, and wrote a new song in four hours, which became “Manhattan Moon.”

Lucy draws attentive, polite audiences. That matters to me. She appreciates it, too. She told us a few times that she really appreciated playing for us and complimented us on how nice we were to play for. She told us that she truly enjoys her fans, and invited us to come chat with her after the show in the lobby, adding that “you don’t have to buy anything–I just want to meet you!” She closed the show with a cover of Elvis Costello’s  “(What’s So Funny ‘Bout) Peace, Love, and Understanding,” but came back to play an encore after a standing ovation.

Lucy ended the night with one of my favorites–“This is Home.” I’ve heard Lucy say that she wrote this song when she and her husband were first starting the adoption process about 15 years ago. They knew there was a little girl waiting for them in China, but hadn’t met Molly yet. I don’t think of myself as much of a sap, but I shed a tear when Lucy sang “when we find her/we’ll belong to her/we won’t see her first smile, we won’t hear her first word/But ours will be the first heart she holds in her hands/She can keep them beside her in her very own room.” What a wonderful way to spend a Saturday! Thanks, Lucy!

I was shocked to find out I’ve never blogged about the fabulous Lucy Kaplansky on whatbreesees.com. I first saw the New York City songstress open for my beloved Ellis Paul in 2007, and have had the pleasure of seeing her live a handful of times since then. Lucy’s music is autobiographical–she boldly shares her life through song. It’s a humbling experience to witness someone pour their heart out on stage like she does. To me, one of the best things an artist can do in person is interact warmly with the audience–and Lucy does this beautifully. I love hearing stories about her family’s new dog (Janie the beagle) or what her beloved daughter Molly is up to these days. (You can follow Lucy on Facebook for more about her day to day.) Lucy tells us the stories behind her songs and is incredibly open with her audience. Seeing her live makes me feel like I’m catching up with a good friend over a cup of tea. There’s something genuinely warm and honest about a Lucy Kaplansky concert experience. I chose this show to be my last of 2016, and it exceeded every expectation and closed out my concert year perfectly.

Lucy opened with “Bird on the Wire” by the recently departed Leonard Cohen. She was chilly and the fan directly above her was blowing, so someone from One Longfellow Square ran downstairs to grab her a long sleeved shirt while nearly every nearby audience member offered her a coat. It was cute. She played a new song that’s a work in progress about old friends and sang a birthday song for her daughter Molly who is shockingly already 14 years old! Lucy spoke so sweetly about Molly. She told us Molly is generous and kind and tough and won’t let anyone mess with her, and that “I’d like to be like her when I grow up.” Lucy played one of her most well known songs, “Ten Year Night,” and told us she and her husband were celebrating their 31st wedding anniversary. It was her last show of 2016, as well, and she gladly offered to play requests from the crowd.

Lucy told us about discovering Spotify and that her cover of Bryan Ferry’s “More Than This” was on Spotify’s “Your Favorite Coffeehouse” playlist. It has been streamed (and she checks every morning) over 10.5 million times. She told us that she feels so lucky that people have listened to this recording that she’s really proud of. The reason she started playing the song was because she was doing an interview on the BBC in London and Bryan Ferry was listening and liked her voice and invited her to come sing with him on his Frantic album that very night. So, to commemorate the event, she learned a Bryan Ferry song to play at her gigs from then on.

Lucy also covered Paul McCartney’s “I’m Looking Through You.” Lucy showed us the mandolin that Duke Levine (who I saw back in March) gave her, and played a song on it for her dad called “Reunion.” Her dad, Irving Kaplansky, was a mathematician, a professor, and a musician, and Lucy played his “Song About Pi” for us, as well. She’s also recorded an album of his songs aptly titled Kaplansky Sings Kaplansky. She also played a song for her mom (who passed away six years ago) called “For Once In Your Life” shortly after.

Lucy wrapped her set by playing all of the songs folks in the audience had requested, and she asked us to come say hello after the show. She told us that she’s always amazed at how nice people who come to her shows are and as someone who sees her shows, I agree. She played a cover of Bruce Springsteen’s “Thunder Road,” which she played without rehearsal for the first time as a request at a show on the Jersey Shore. We sang along. It was a lovely way to close the show. The crowd asked for an encore, so Lucy gladly came back to the stage and played “Guinevere” for us. Seeing Lucy live feels intimate like a house concert, and she made One Longfellow Square feel like we were in her living room that night. Thanks, Lucy! See you next time! Happy 2017, All!