The Lone Bellow is my favorite band and I nearly missed the chance to see them play just a couple of hours from home! My dear friend Ken asked me when I saw him at Josh Ritter’s show on July 12th if I was planning to see The Lone Bellow as part of the Prescott Park Concert Series in Portsmouth a few days later. It hadn’t been on my radar, so Ken gets a gold star! Thanks, Ken! I taught at Upward Bound at Bowdoin College on Wednesday morning, had a great lunch with my good friend Sarah, and then headed south to Portsmouth to be in line early so I could get a good spot for the show. Since there was rain in the forecast, Prescott Park Arts worked feverishly to move the show inside to the beautiful South Church on Main Street in downtown Portsmouth. I found a fantastic parking spot just across a parking lot from the church and saw a small group of people gathered on the stairs when I got there. As I stepped out of my car I could hear the sweet sounds of The Lone Bellow’s sound check! The doors to the sanctuary were open, and it was quite a treat to get to hear them play for a bit! 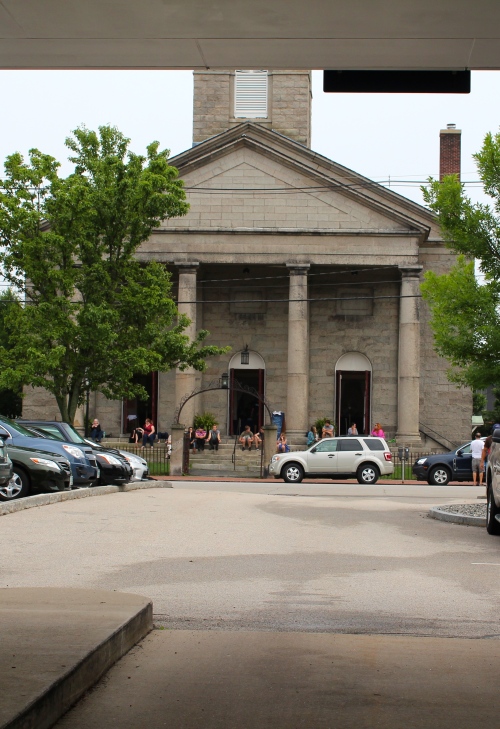 South Church from my parking spot

I grabbed a spot in line and waited for the doors to open at 5. Since I’m not a Prescott Park Arts Festival member and hadn’t paid for their “reserve a blanket” program (since I’d figured we’d be outside and I’d get there many hours early), my seating choices (even though I was one of the first ten people inside) were limited to seats that weren’t front and center. You won’t be surprised if you’re a regular reader to know that I actually tested out the view from many seats before settling on an elevated section of seating stage left about six pews back in order to see the faces of everyone in the band. I read my friend Sarah’s dad’s new book of poetry for a while and was eventually joined by Mary (a Kindergarten teacher!) and then her husband Henry who told me about their son and his band in Maine. My concert friend Colin eventually joined me for the show and even brought me some snacks since I’d skipped dinner to get our seats. Thanks, Colin! 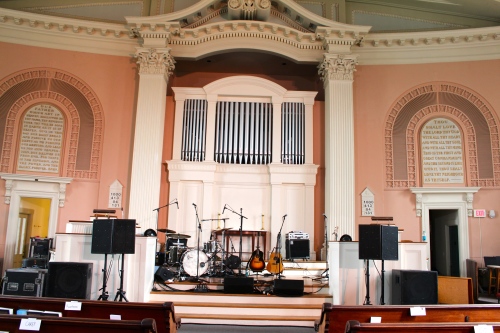 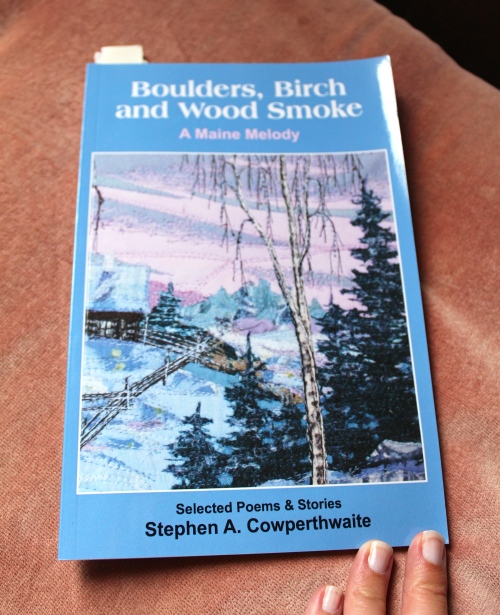 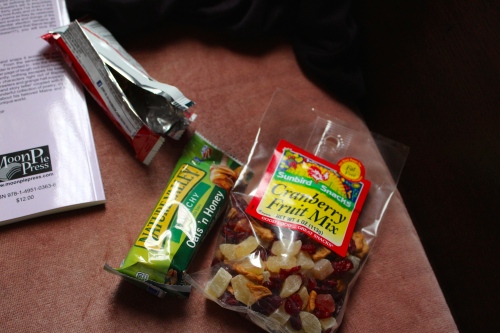 Thanks for dinner, Colin! You’re a lifesaver!

The church was packed by show time. The temperature quickly rose and only got hotter when The Lone Bellow took the stage. The last time I’d seen The Lone Bellowwas back in February at The Music Hall in Portsmouth, and the fans they’d earned that night were back out in full force and had all brought friends. The Lone Bellow was introduced by Rita Carey from 92.5 The River and they got a standing ovation as they approached the stage. I don’t know if I’ve seen a standing O to start a show! It was abundantly clear that this crowd was jazzed and ready for a great night. I had a moment of pause as the show started and Zach sang the opening lyrics of the night—“I let you go/Hope you come back to me”—because their music is visceral and I am going through a break up and wondered if I’d get “all kinds of emotional” during the show. I’m happy (and a little surprised) to report that I made it and was pretty giddy for the rest of the night. In fact, I don’t think I had a conscious thought about anything other than the show for the duration. The Lone Bellow, well, they’ll cure what ails you. There is not another band out there right now that puts on the live show that The Lone Bellow does. They do not hold anything back. It is beyond a pleasure to see them live and I’d go see them night after night if I could.

The view from my seat 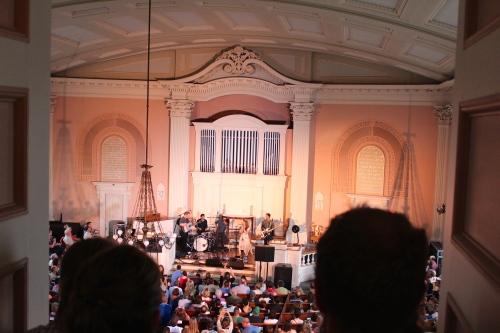 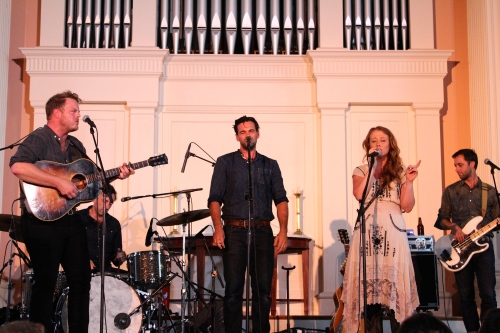 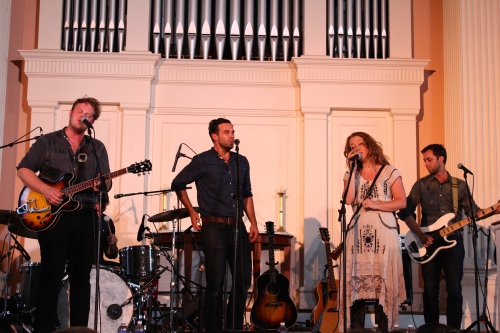 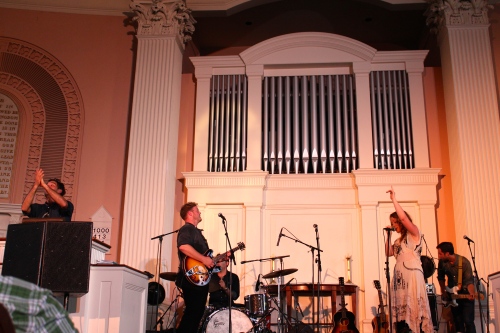 Colin kept track of the night’s set list and posted it on setlist.fm: 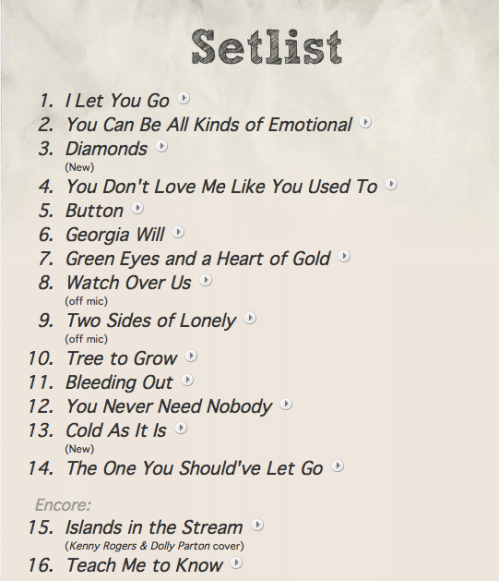 Everyone was up on their feet clapping during “Green Eyes and Heart of Gold.” I’ve always described seeing The Lone Bellow as a spiritual experience and have said that their show feels like going to a revival, but this venue took that feeling to a whole new level! I was over the moon when Zach, Brian, and Kanene unplugged and walked to the center of the room (in line with my seat) to play “Watch Over Us” and “Two Sides of Lonely” acoustically. Both were breathtaking. Their passion is palpable. You could have heard a pin drop in the room.

Getting ready for “Watch Over Us”

This sequence of photos is my favorite from the night. Look at that passion. They give 110%.

The crowd roared as Zach, Brian, and Kanene head back to the stage to play another of my favorites, “Tree To Grow,” which included some audience participation during the “a tree I’ll grow to let you know my love is older than my soul” refrain. After we belted out the “ba ba das” during “Bleeding Out,” Zach checked in with us to see if anyone had fainted or needed water. It was very sweet. They played their radio hit “You Never Need Nobody” next and then let us know that they’re recording their sophomore album with Aaron Dessner from The National and hope to have it out in January. Zach joked that they’d recorded 19 songs but could only afford to put 13 on the new album. I learned at their last show that their self-titled debut album was funded as a Kickstarter project. Lucky us that the project got funded, right!? Zach also joked about their drummer Brian’s hobbies and let us know that both he and their tour manager were single and looking. They wrapped their incredible set with “The One You Should Have Let Go” and left the stage as the crowd genuinely went wild.

The band came back to the stage and thanked us profusely for a beautiful night before playing their cover of Dolly Parton and Kenny Rogers’ “Islands in the Stream.” Zach, Brian, and Kanene unplugged and went back to the center of the room to play “Teach Me to Know” standing on a pew surrounded by thrilled onlookers. The crowd joyfully joined them during the “carried away” refrain and we sang it over and over again, (I think) hoping to make the night last as long as possible. What a beautiful evening of heart-wrenching, hopeful music from some of the most gifted, enthusiastic, giving musicians you could possibly see live. Thank you to everyone who made this very special evening possible!

P.S.—In case you need more convincing, check out The Lone Bellow’s full show at the Paradise Rock Club in Boston that Front Row Boston just debuted. You will surely be impressed, and sad you missed it live!