Nearly two months late but with many, many wonderful senior events at my school behind me (most precious were the graduation marches my seniors did through four of our five district elementary schools), I can catch a quick breath and write a bit. The Ballroom Thieves are easily one of my top favorites live bands. [Fun fact: I first saw The Ballroom Thieves live opening for The Lone Bellow three years ago today!] I feel really lucky to have seen them a lot, and am so glad that their star continues to rise, having now played at the Newport Folk Festival and opened for Lake Street Dive at Thompson’s Point in Portland. That’s a huge venue, and friends who were able to go and had never seen the Thieves messaged me to say how great they are (um, yeah!).

Thinking back, I remember that I was able to grab a quick dinner at Slab with one of my dear former class presidents before heading over to the show. I got to Port City Music Hall early to make sure I’d have my favorite spot up front and even beat Colin there. Erin and Darcy, teachers from Westbrook High School who we’d met a couple of shows back, were also there, and my current (well, graduation was Sunday, but I’m not ready to let go) class president, Carmen, also joined the full house for the show. This was one of those nights when the crowd was top notch. I think it’s because there were a lot of proud Maine Youth Rock Orchestra family members in the crowd, celebrating the beginning of their April vacation week tour with The Ballroom Thieves. Anyhow, it’s always great to be surrounded by positive energy and attentive people at a show, and this was a real treat.

Burlington, Vermont’s The DuPont Brothers took the stage and warmed up the crowd. Their harmonies, pretty guitar arrangements, and friendly banter made for a good set. Brother Zack was celebrating his birthday, so we sang for him. They’d used Kickstarter to fund their most recent album, A Riddle for You, and played a lot of those songs for us. They invited Maine Youth Rock Orchestra (MYRO) to join them for “Trespassers,” which they sweetly dedicated to a big group of young kids sitting on the floor just in front of the stage. The DuPont Brothers will be back in Portland at One Longfellow Square on Thursday, June 30. 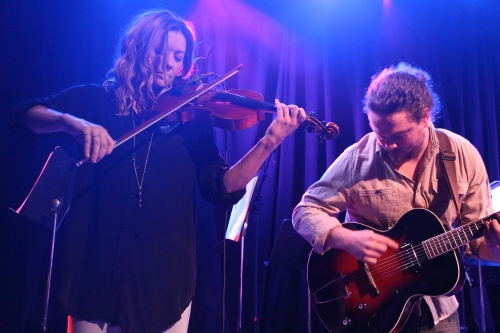 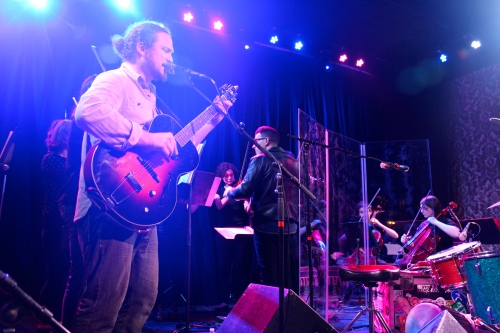 “Trespassers” with The DuPont Brothers and MYRO

Kevin Oates, the founder and director of Maine Youth Rock Orchestra, took the stage to do a little fundraising to support their ten-day tour with The Ballroom Thieves. He said he’d shave his head (and he has really good hair) if they reached their fundraising goal before the show ended, which shows dedication. MYRO is awesome. As a teacher, it hits me right in the feels that this awesome group exists, and that they’ve had such great success, including being featured on NPR Music and being the first youth orchestra to tour with a national artist. Kevin tells the story himself on medium.com with “Why I started Maine Youth Rock Orchestra.” I have a front row ticket to see MYRO play with Gregory Alan Isakov on June 21 at the State Theatre and am SO excited to see them with another of my favorite artists. 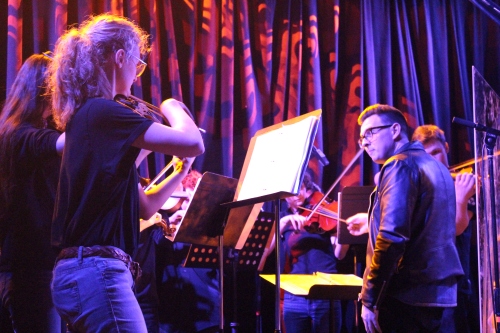 Martin and Devin of The Ballroom Thieves with MYRO 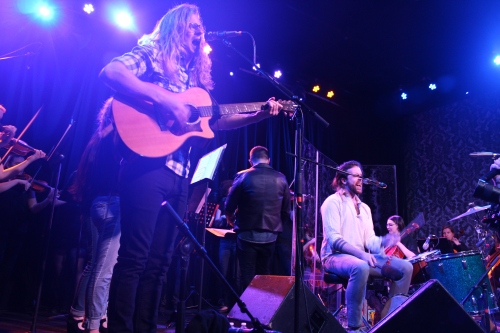 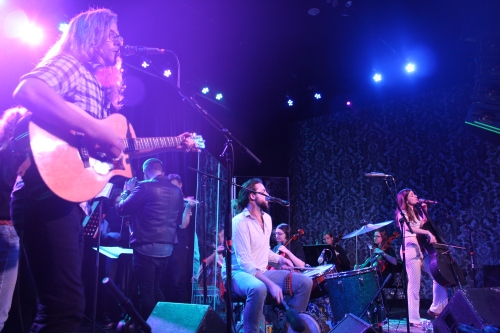 Martin, Devin, and Callie of The Ballroom Thieves with MYRO

The Ballroom Thieves are fantastic. Their songs and harmonies resonate, their desire to connect to the audience admirable, and the sheer force of their musicianship is moving. This was another in a series of top-notch performances from Martin, Devin, and Callie. Hearing them with MYRO, adding to the richness of their already full sound, was phenomenal. I feel really lucky to have been at this show. I was so glad to learn that a new album is forthcoming. You’ve got to check out the video for “Bury Me Smiling” featuring MYRO that NPR Music picked up. “Peregrine” sticks out as a newer song I’m looking forward to getting better acquainted with. “Here I Stand” was a particularly driving force live, and “The Loneliness Waltz” is surely one of my favorite Thieves’ songs. This was truly a phenomenal show—start to finish. See these groups live whenever you have the chance. The Thieves will be joined by MYRO on July 12 at Snow Pond Center for the Arts in Sidney, Maine. Come! I will see you there.