What an awesome night! I see a ton of music by myself, but I ended up with a hearty group of friends Saturday night, all right up front along the barricade. It was a truly A+ evening.

The folks at Empire Chinese Kitchen recognize me (it’s my go-to) and know that I’m probably grabbing a quick dinner before a show when I snag a solo seat at the bar, but my friend Colin (who I met years ago at Josh Ritter show) and his friend Meghan met me for pre-show drinks. I picked up my photo pass at the State Theatre box office and quickly made my way to the stage and grabbed a spot in the front row on the barricade. Colin and Meghan joined me, and my friend Bob surprised me by driving up from Massachusetts to join us (he and I met at an Iron & Wine show back in 2011 at the State Theatre). I chatted with Ashley and Marsha who were next to me along the barricade, and when my friend Grace and her husband Trent showed up, they all already knew each other. So what I’m saying is that Josh Ritter brings good people together and it was a delight to see a show with so many wonderful people. My friend Bartlett joined us, and then his friends Nick and Sarah showed up, too. It was a party.

I am a fan of show opener Good Old War, and I arrived when doors open to be sure I’d be right up front. I first saw Philadelphia’s Keith [Good]win, Tim Arn[old], and Dan Sch[war]tz open for Brandi Carlile back in 2010, but hadn’t caught them live since 2015. I supported their Pledge Music campaign to produce Broken Into Better Shape, and I wear the Good Old Warrior t-shirt they sent me often. It was a little strange to see them in such a big venue, because the thing I’ve enjoyed most about them live is how intimate it feels. They played an entire glorious set unplugged standing in the middle of the crowd when I saw them in 2015, but I suppose that’s not something an opening band can pull off when most people are usually only there for the headliner. Folks in the audience listened during their set, and I saw a bunch of people up front singing along to all of the songs, too.  I was so glad to hear “That’s Some Dream,” “Amazing Eyes,” and “My Own Sinking Ship” in person again. I’m pretty sure Good Old War didn’t play “Tell Me What You Want From Me,” which I expected to hear because 98.9 WCLZ plays it regularly. I am eager to see them as a headliner again, and hope they’ll come back to Maine soon.

I have known about Josh Ritter for ages, and I’ve seen him a handful of times live, but I’ve never taken the time to dig into his music catalog until about a month ago. I’ve mostly gone to see him live because his music matters to people who matter to me and he puts on a great show. What I appreciate most about him as a performer is the joy he exudes in the form of a giant smile while he’s on stage. His music is layered and lyrical, and it’s laden with Bible references and heavy themes that don’t work for me as background music. What I’m trying to say is that his songs really deserve a listener’s attention. I also love a sad song, so listening to his newest album, Gathering, has been right up my alley. “Showboat,” “When Will I Be Changed,” “Train Go By,” and “Thunderbolt’s Goodnight” stick out to me on the album and all strike me as deeply personal, beautiful, and relatable. 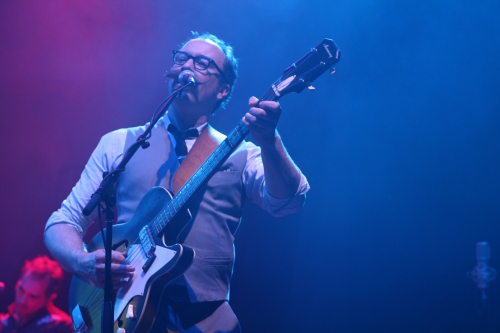 Josh posted on Facebook when his album dropped that “I have never lived in times like these. That music somehow manages to survive and matter amidst the chaos seems ever more miraculous, ever more something to celebrate and be grateful for.” We are living in strange, dark days, but Gathering helps me feel a bit better, because Josh eloquently captures the sadness and makes the darkness feel less isolating.

This was by far the most engaged I’ve been at a Josh Ritter show. I’d listened to him a lot in the weeks leading up to the show, and it was the first time I knew a lot of the words and could sing along. The crowd was awesome. I remember a few moments during the show when I realized I could only hear Josh–which is incredible in a big venue with multiple bars. People who love Josh listen to him, too, I guess, and it was a welcome treat to really hear an artist like that. Since no one was pushy or drunk or yelling I could relax. I took pictures during the first three songs of both sets, but I danced, had a few drinks, and enjoyed every moment.

Josh didn’t say a whole lot during the show, but we did learn that “Train Go By” was about a stint living in the country, where the only entertainment was to go park by the train tracks and watch the trains go by. That adventure didn’t last long. Josh humbly expressed his gratitude for having the opportunity to write music and perform for a living. Josh did three songs acoustic in the middle of his set, and Zack joined him for “Hopeful,” which is one of my favorites. Check out these lyrics–“How many times did you give all your love/And find out it was so far from enough?/I followed her out into the street in the rain/And the whole world stopped spinning and just went up in flames.” I have a lot of respect for an artist that will bear their soul, and Josh is one of them. 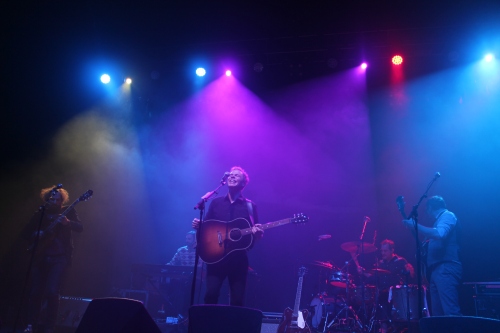 I loved the energy at the end of their set. They wrapped up with “When Will I Be Changed,” “Homecoming,” and “Getting Ready to Get Down,” which punctuated the night’s messages of hope and optimism and brought the energy up enough to encourage a dance party to end the show. I love acoustic music best, and loved the three song acoustic encore, especially “Roll On,” which is a song I didn’t know before. It has a particularly beautiful line in it, too–“Somewhere out there I believe in me.” Josh closed the night solo acoustic with “Girl in the War.” I loved this show and it hit me right in the feels to hear sadness, honesty, and hope mingled together in the air.

My friend Aimsel Ponti interviewed Josh a week or so before his Portland stop and asked some great questions that I wanted to know the answers to. Also, here’s a 45 minute set that Josh and bassist Zack Hickman played for 75 lucky fans at The Clown Lounge in St. Paul, and it captures their energy and current set list nicely.

To the woman in the bathroom who told me you liked my highlights–you made my night! I don’t have highlights, just a lot of gray hair.

My night wrapped with Bartlett, Nick, and Sarah over slices at Otto, and I ran into my friend Kevin Oates (the talented director of the Maine Youth Rock Orchestra) for hugs and catching up on the sidewalk on my way back to my car. This was such a fun night that was full of surprises from start to finish.