The Ghost of Paul Revere

I hadn’t seen The Ghost of Paul Revere play live in at least a year, so I was really excited for them to come play at Johnson Hall in my own sweet little town. I was only slightly tempted to stay home and binge on the fourth season of House of Cards, which was released that day, but I’m glad I made it downtown for this show instead. The Ghost of Paul Revere (GPR) had played Johnson Hall a year or so ago (I’d suggested them to Johnson Hall Executive Artistic Director Mike Miclon), and many folks in the near sell out crowd were returning to see them again.

This was the best I’d heard GPR sound since the first time I saw them play back in May of 2013 at One Longfellow Square. While I was doing research for this post, I found a quote from my May 2013 post on whatbreesees.com on The Ghost of Paul Revere’s website. Awesome!

I love it when I show up on a band’s website! http://www.ghostofpaulrevere.com/epk/

Griffin Sherry has a clear, beautiful voice. Sean McCarthy claimed to be under the weather, but he was hilarious and kept us laughing with lots of banter anyhow. Their three part harmonies with Max Davis were lovely. Matt Young killed on harmonica. They really made me feel like I was in their living room, and that is the best kind of show possible. 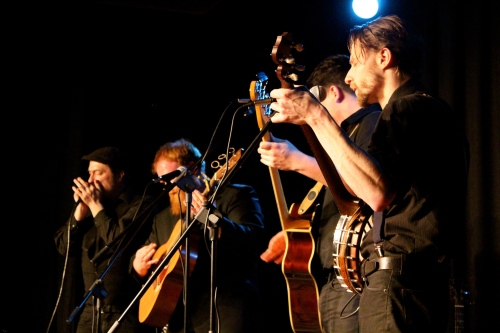 “Ghostland” and “Mountain Song” were both early standouts of the night, and GPR recorded both songs during their Audiotree session. After their first show at Johnson Hall, GPR came back to film their video for “Wolves” upstairs in the stunning, unfinished upstairs concert hall. “San Antone” is easily my favorite GPR song, so I was glad to hear that one live. Their last song before intermission was a cappella. Sean asked a group of little kids in the front row if they knew what that meant. They didn’t. It was a super cute exchange. After intermission, GPR played “Ballad of the 20th Maine,” did an amazing cover of “Baba O’Riley,” and closed their set (appropriately) with “This is the End.”

A screenshot of GPR’s “Wolves” video, shot in the unfinished upstairs concert hall at Johnson Hall in Gardiner, Maine.

After the show, Gardiner’s new-ish record store, Niche, Inc. stayed open to host folks who wanted to see their shop. I was impressed when all of the members of The Ghost of Paul Revere went over to support the store, whose owners Sam and Jason are big fans. I normally don’t chat with musicians (if they’re having an off night, I’ve found it can destroy all the love you have for their music), but since GPR did a nationwide tour with my dear friend Max Garcia Conover, I decided to break the rule. They’re all totally down to Earth, approachable guys. We got a chance to talk music for a long time, which was a sweet treat. Come back soon, guys! Thanks for a great show! 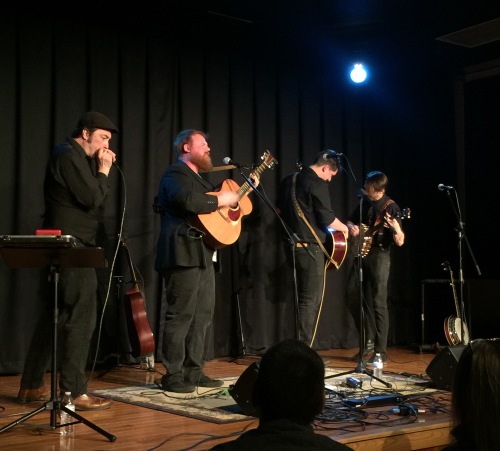 2 responses to “The Ghost of Paul Revere”